Pirate-like bullyism only to deepen US credibility deficits 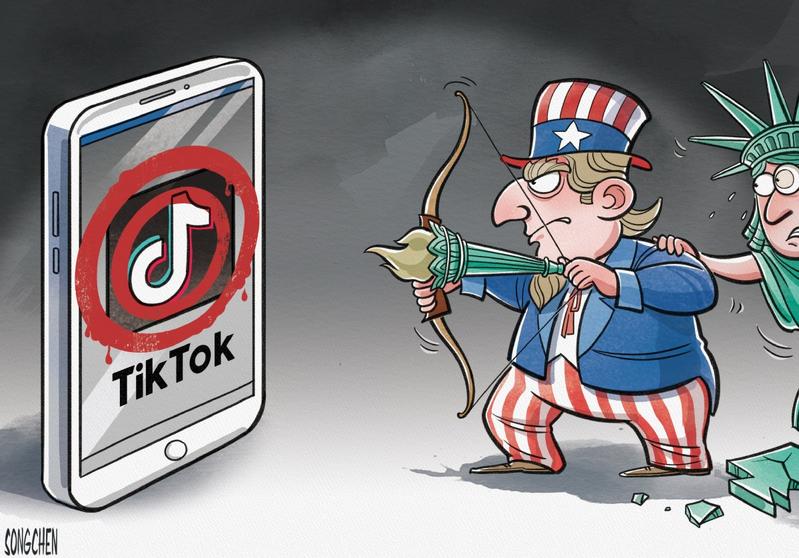 BEIJING – Citing so-called national security concerns, Washington announced Thursday an upcoming ban on dealings with the Chinese owners of popular apps TikTok and WeChat, while on the same day, it reimposed a 10-percent tariff on Canadian aluminum exports into the United States.

It has become increasingly clear that each time Washington abused the national security pretext to attack foreign industries or companies, it actually reveals the government's indulgence in protectionism, hegemonism and bullyism, which is akin to "modern piracy," as a German official has said.

Whenever it seeks to contain China's increasing tech influence or defend the US industry from competition, the present US administration has cited national security concerns without concrete evidence, unscrupulously putting any competitor or challenger into the crosshairs for punishment like a fine, ban or sanction.

In most cases, the so-called US national security concerns are ordinary economic or trade disputes which can be reasonably solved through bilateral or multilateral negotiations. However, Washington is now obsessed with flexing its muscles, regardless of hurting partnerships or violating market principles and international norms.

ALSO READ: TikTok ban will deal a heavy blow to US reputation

From China and Japan in Asia, Germany in Europe, to Brazil and Argentina in Latin America, a bunch of US trade partners have suffered from tariff sanctions or unfair agreements skewed towards some short-term American interests.

The international community won't be fooled by the pirate-like bullyism under the guise of national security. Even the US allies have protested against the brazen tricks

A group of Washington politicians have time and again proved that the spirit of free enterprise and fair competition they claim to espouse is no more than a lie.

The international community won't be fooled by the pirate-like bullyism under the guise of national security. Even the US allies have protested against the brazen tricks.

As a matter of fact, US allies, including Canada and European countries, have become jittery over the recent US protectionism.

In May 2019, when Washington lifted tariffs on Canadian steel and aluminum, Freeland said, "The reality is that this US administration is openly, explicitly, and proudly protectionist," reminding the domestic industry to remain vigilant about the neighboring super power.

In October 2019, when Washington slapped US$7.5 billion in tariffs on EU cheeses, olives, and whiskey, as well as planes, helicopters and aircraft parts under the pretext of national security, the Europeans said it was protectionism and broke global trade rules.

The repeated use of national security by the US to cover its "modern piracy" not only diminishes its credibility in the eyes of other countries, including its allies, but also hampers its own interests.

"These tariffs will raise costs for American manufacturers, are opposed by most US aluminum producers, and will draw retaliation against US exports – just as they did before," Myron Brilliant, the US Chamber of Commerce's executive vice president, said in a statement.

Meanwhile, Canadian Prime Minister Justin Trudeau has said that "Canada will impose countermeasures that will include dollar-for-dollar retaliatory tariffs."

ByteDance, TikTok's parent company, said Friday in a statement that Washington's ban on the popular app has started a dangerous precedent violating the freedom of expression and the open-market principle, and it will "pursue all remedies available...if not by the Administration, then by the US courts."

Decision-makers in Washington must realize that indulging in pirate-like bullyism will only distance the country from international norms and partners, deteriorate its business environment and keep away foreign investment. At long last, these trust-breaking actions are doomed to boomerang.