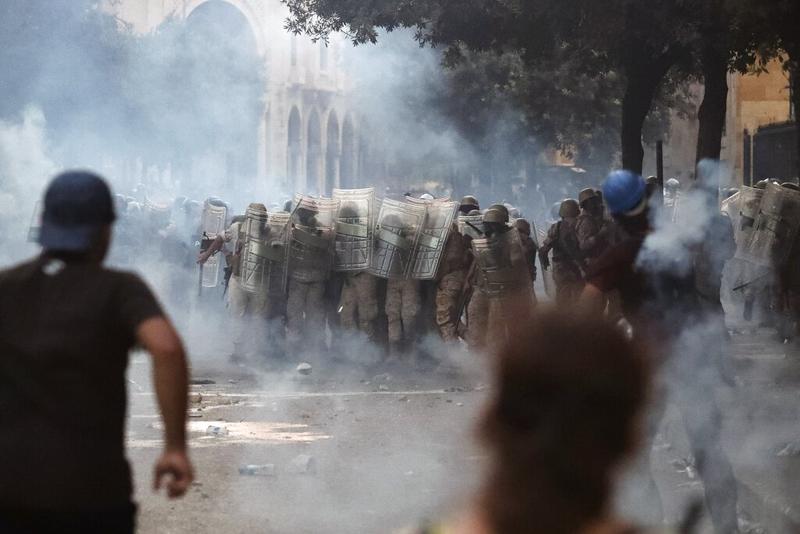 Lebanese soldiers stand among tear gas during clashes with protesters as part of a protest against the political elites and the government after this week’s deadly explosion at Beirut port, Aug 8, 2020. (THIBAULT CAMUS / AP)

BEIRUT – Lebanese protesters stormed government ministries in Beirut and trashed the offices of the Association of Lebanese Banks on Saturday as shots rang out in increasingly angry demonstrations over this week’s devastating explosion.

The protesters said their politicians should resign and be punished for negligence they say led to Tuesday’s blast, the biggest ever to hit Beirut, that killed 158 people and injured more than 6,000, compounding months of political and economic meltdown.

A policeman was killed during the clashes, a spokesman said. A policeman at the scene said the officer died when he fell into an elevator shaft in a nearby building after being chased by protesters.

The Red Cross said it had treated 117 people for injuries on the scene while another 55 were taken to hospital. Policemen wounded by stones were treated by ambulance workers. A fire broke out in central Martyrs’ Square.

Dozens of protesters broke into the foreign ministry where they burnt a portrait of President Michel Aoun, representative for many of a political class that has ruled Lebanon for decades and that they say is to blame for its current mess.

The government has promised to hold those responsible to account. But few Lebanese are convinced. Some set up nooses on wooden frames as a symbolic warning to Lebanese leaders

“We are staying here. We call on the Lebanese people to occupy all the ministries,” a demonstrator said by megaphone.

About 10,000 people gathered in Martyrs’ Square, some throwing stones. Police fired tear gas when some protesters tried to break through the barrier blocking a street leading to parliament, a Reuters journalist said.

Police confirmed shots and rubber bullets had been fired. It was not immediately clear who fired the shots. Riot police shot dozens of teargas canisters at protesters, who hit back with firecrackers and stones.

They chanted “the people want the fall of the regime”, reprising a popular chant from the Arab Spring uprisings of 2011. They held posters saying “Leave, you are all killers”.

The US Embassy in Beirut said the US government supported the demonstrators’ right to peaceful protest and urged all involved to refrain from violence.

The embassy also said in a tweet that the Lebanese people “deserved leaders who listen to them and change course to respond to popular demands for transparency and accountability”.

Prime Minister Hassan Diab said the only way out was early parliamentary elections.

The protests were the biggest since October when thousands of people took to the streets in protest against corruption, bad governance and mismanagement.

“You have no conscience, you have no morality. Go home! Leave! Resign, Enough is enough,” shouted one of the protesters. “What else do you want? You brought us poverty, death and destruction,” said another.

Soldiers in vehicles mounted with machine guns patrolled the area. Ambulances rushed to the scene.

“Really the army is here? Are you here to shoot us? Join us and we can fight the government together,” a woman yelled. 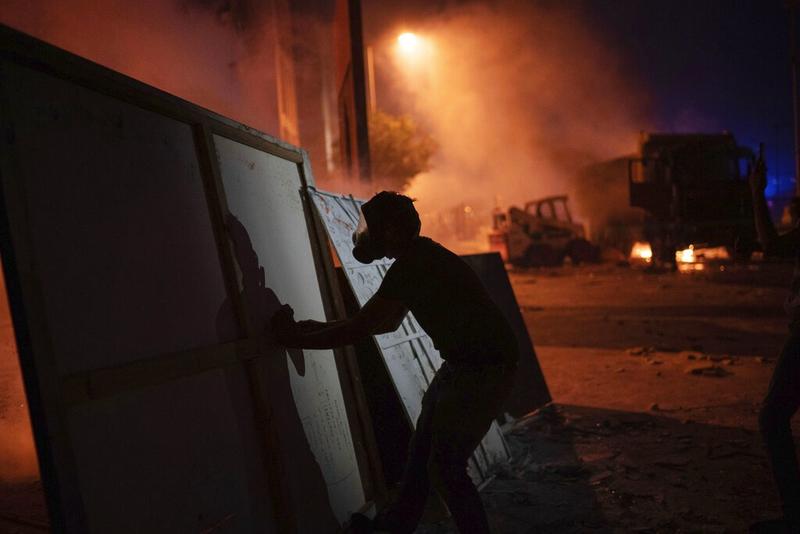 Protesters clash with police during a demonstration against the political elites and the government after this week's deadly explosion at Beirut port which devastated large parts of the capital, in Beirut, Lebanon, Aug 8, 2020. (FELIPE DANA / AP)

Tuesday’s blast was the biggest in Beirut’s history. Twenty-one people were still reported as missing from the explosion, which gutted entire neighbourhoods.

The government has promised to hold those responsible to account. But few Lebanese are convinced. Some set up nooses on wooden frames as a symbolic warning to Lebanese leaders.

“Resign or hang,” said one banner at the demonstration.

The prime minister and presidency have said 2,750 tonnes of highly explosive ammonium nitrate, which is used in making fertilisers and bombs, had been stored for six years without safety measures at the port warehouse.

The explosion hit a city still scarred by civil war and reeling from an economic meltdown and a surge in coronavirus infections.

For many, it was a dreadful reminder of the 1975-1990 civil war that tore the nation apart and destroyed swathes of Beirut, much of which had since been rebuilt.

Some residents, struggling to clean up shattered homes, complain the government has let them down again.

“We have no trust in our government,” said university student Celine Dibo as she scrubbed blood off the walls of her shattered apartment building. “I wish the United Nations would take over Lebanon.”

Many people denounced their leaders, saying none of them visited the site of the blast to comfort them or assess the damage while French President Emmanuel Macron flew from Paris and went straight to the scene to pay his tribute. 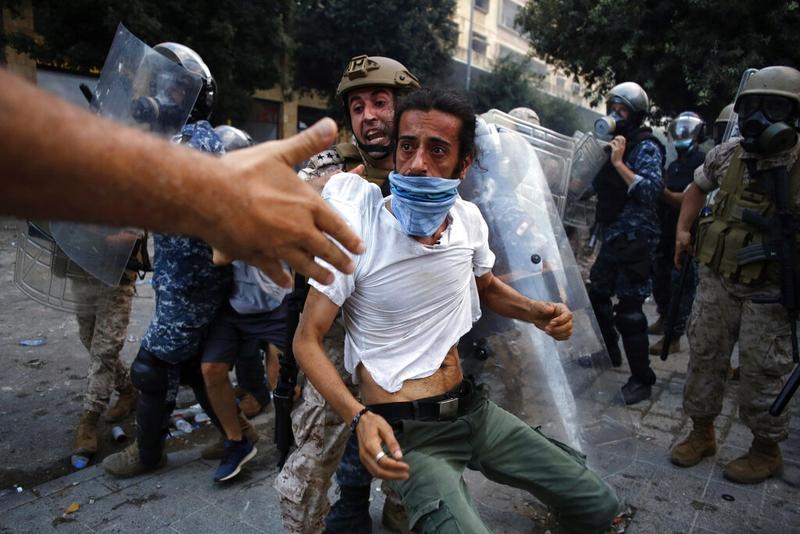 A protestor is evacuated from clashes during a protest against the political elites and the government after this week's deadly explosion at Beirut port, Lebanon, Aug 8, 2020. (THIBAULT CAMUS / AP)

Macron, who visited Beirut on Thursday, promised aid to rebuild the city would not fall into “corrupt hands”. He will host a donor conference for Lebanon via video link on Sunday, his office said. US President Donald Trump said that he will join.

“We don’t want any government to help us,” said unemployed protester Mahmoud Rifai. “The money will just go into the pockets of our leaders.”

Aoun said on Friday an investigation would examine whether the blast was caused by a bomb or other external interference. He said the investigation would also weigh if it was due to negligence or an accident. Twenty people had been detained so far, he added.

‘WE CAN’T AFFORD TO REBUILD’

Officials have said the blast could have caused losses amounting to $15 billion. That is a bill that Lebanon cannot pay after already defaulting on a mountain of debt - exceeding 150% of economic output - and with talks stalled on an IMF lifeline. For ordinary Lebanese, the scale of destruction is overwhelming. Marita Abou Jawda was handing out bread and cheese to victims of the blast.

“Macron offered to help and our government has not done anything. It has always been like that,” she said. “After Macron visited I played the French national anthem all day in my car.”