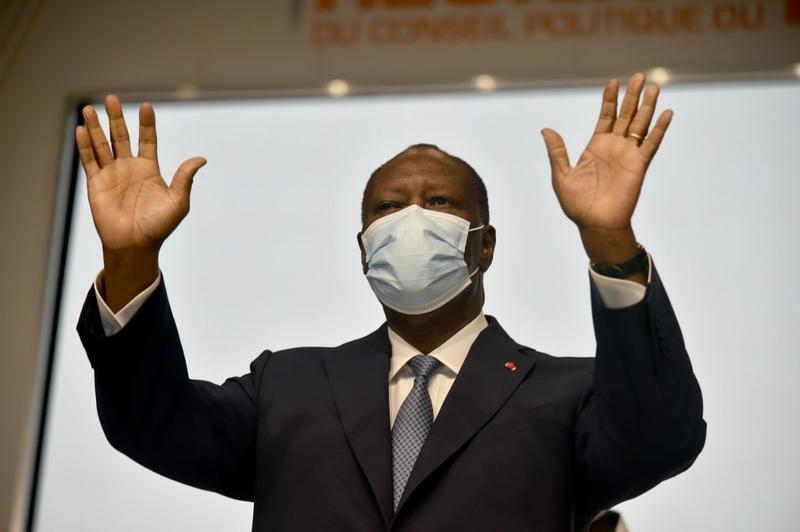 Ivorian President Alassane Ouattara waves to the crowd as he arrives to attend a meeting of the Houphouëtists for Democracy and Peace concerning the party's candidate to the presidential elections to be held in October, at the Ivoire Hotel in Abidjan on July 29, 2020. (SIA KAMBOU / AFP)

ABIDJAN - Ivory Coast President Alassane Ouattara said on Thursday he would seek re-election in October, formally accepting the ruling party’s nomination to be its candidate and defying opponents who say the constitution forbids a third term.

Ouattara, who has governed since 2011, said in March he would not run again. But his preferred successor, then-prime minister Amadou Gon Coulibaly, died in July, leading the party to ask Ouattara to reconsider

Ouattara, who has governed since 2011, said in March he would not run again. But his preferred successor, then-prime minister Amadou Gon Coulibaly, died in July, leading the party to ask Ouattara to reconsider.

The election is seen as the greatest test yet of the tenuous stability achieved since a brief civil war in 2010 and 2011 killed about 3,000 people following Ouattara’s first election win.

“I have decided to respond favourably to the call of my fellow citizens,” Ouattara said in a televised speech. “Given my previous promise, this decision represents a real sacrifice for me.”

His opponents say the two-term limit in the constitution bars him from running again, but Ouattara has said his first two mandates do not count under the new constitution adopted in 2016.

Opposition party, the Ivorian Popular Front (FPI), called his decision to run “deplorable.” FPI spokesman Issiaka Sangare added: “Ivory Coast could have given another signal that would have allowed democracy to continue.”

FPI is the party of Ivory Coast’s former president, Laurent Gbagbo. On Saturday, it named his one-time prime minister Pascal Affi N’Guessan as its candidate, ending speculation Gbagbo might return from abroad to stand.

Ouattara’s other main challenger will be Henri Konan Bedie, who was president from 1993-1999 and is the confirmed candidate of one of the country’s largest parties, the PDCI.

The race is expected to be the most hotly contested since 2010, when Gbagbo’s refusal to step down after Ouattara’s victory sparked the deadly conflict.

Bedie has said he and Gbagbo have agreed that their parties would back the other’s candidate in the event of a second-round run-off against Ouattara.

The first round of polling will be held on Oct. 31.