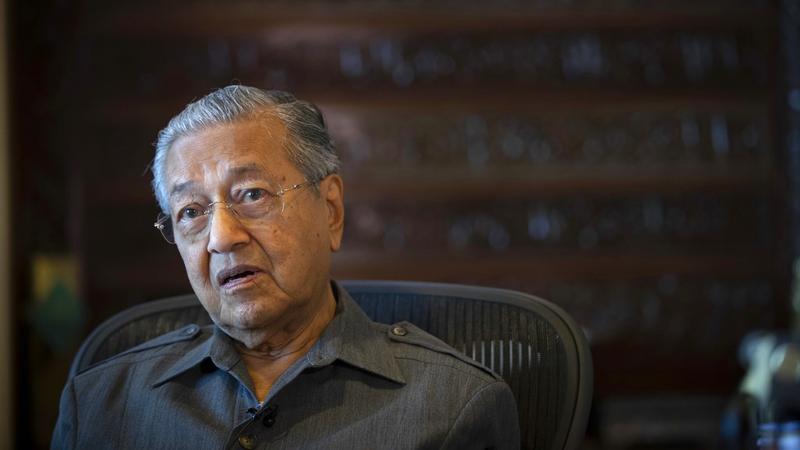 In this file photo, former Malaysian Prime Minister Mahathir Mohamad speaks during an interview with Associated Press at his office in Putrajaya, Malaysia, on April 18, 2018. (VINCENT THIAN / AP)

Malaysia’s former premier Mahathir Mohamad will form a new political party to take on the government amid talk of looming snap polls.

The party would be Malay-based and not tied to any existing political coalitions, Mahathir told a press conference in Kuala Lumpur

The party would be Malay-based and not tied to any existing political coalitions, Mahathir told a press conference in Kuala Lumpur. Earlier on Friday, he lost a bid to challenge his termination from the Bersatu party he founded with Prime Minister Muhyiddin Yassin in 2016.

“The basis of our struggle is to destroy corruption and kleptocracy,” Mahathir said. “We will be very fair to all the other races, but we feel that there are some problems with the Malays which need the attention of a Malay party.”

Mahathir had been prime minister until he abruptly resigned in February, saying he had lost the support of his Bersatu party, which led to the collapse of the government.

A week-long turmoil ensued until Muhyiddin rose to power unelected. The current premier holds a razor-thin majority in parliament as politicians from both sides of the divide said they are preparing for a snap election.

Mahathir said Bersatu, which revoked his membership along with four others, had been “hijacked” by those who wished to cooperate with a “kleptocratic” government. Grass-root Bersatu members were largely on his side and are welcome to join his new party, he added. His son Mukhriz Mahathir will be the temporary president of the party, which isn’t named yet.

The new party could pose a challenge for Muhyiddin as they both seek to court the same voter base -- Malaysia’s ethnic Malay majority.

The demographic is already cornered by Muhyiddin’s allies Pan-Malaysian Islamic Party and the United Malays National Organisation, who plan to contest their traditional seats in a snap election. UMNO was once led by former premier Najib Razak, who was convicted of corruption in July.

“I think that it is very dangerous for them to hold an election now,” said James Chin, who heads the Asia Institute at the University of Tasmania. “The problem is that Bersatu will be in trouble in the rural areas because most of the seats will still go back to UMNO and PAS.”