US eateries go outdoors for survival 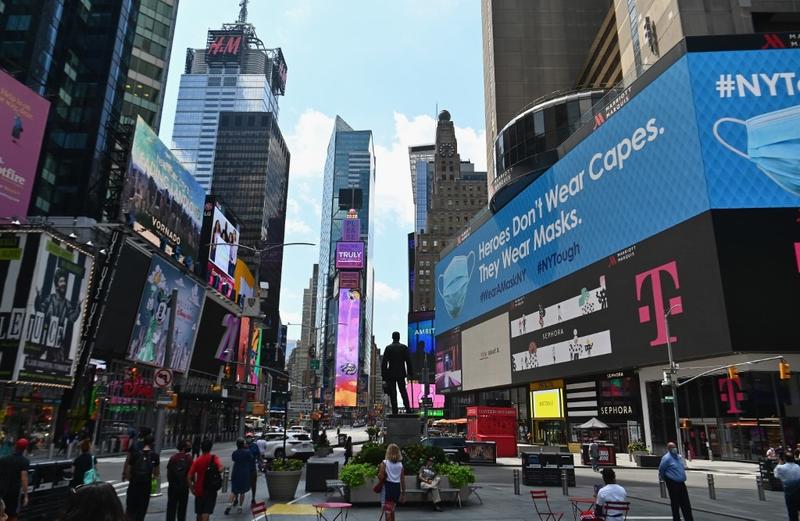 With the coronavirus pandemic preventing restaurants in the United States from offering indoor dining, many have turned to improvised seating outside.

But expanding into the great outdoors can bring risks, especially for bars and restaurants in crowded cities that did not previously spill out onto sidewalks, streets and parking spots.

But expanding into the great outdoors can bring risks, especially for bars and restaurants in crowded cities that did not previously spill out onto sidewalks, streets and parking spots

In New York City, an Open Restaurants program that debuted on June 22 allowed more than 9,500 restaurants in all five boroughs to temporarily expand their seating areas onto sidewalks, parking spaces (so-called parklets) and closed roadways.

READ MORE: US eateries reopening in midst of challenges

Of that total, more than 6,000 restaurants have been approved to actually set up tables and chairs on square footage－roadway and parking spots－that was recently the domain of motor vehicles, according to a report in The Wall Street Journal.

New York's rules stipulate that roadway cafes－or "streateries", as the website Curbed calls them－must have barriers at least about 46 centimeters wide separating patrons from passing traffic and must be marked with reflective tape. Tables must be at least about 4.6 meters from a fire hydrant and 8 feet from a crosswalk.

Of the restaurants offering open-air dining under the program, about half are in Manhattan, about 2,800 have sidewalk seating only, 760 have roadway seating and 4,300 have both, the Journal reported.

Even if one can ignore the risk of sudden bad weather, unmasked pedestrians and the occasional rat, there is still the issue of noise and fumes from cars and buses to cope with. But some establishments have the good fortune to be located on streets included in New York's Open Streets program, which closes 62 streets each weekend to traffic to accommodate roadway dining and other socially distanced activities.

Pell Street in Manhattan's Chinatown was one of the first to participate, under the sponsorship of the Chinatown Business Improvement District and the Chinese Consolidated Benevolent Association.

One downside of the trend is that so far there have been four collisions resulting in eight minor injuries in New York City alone, the Journal reported.

Despite the incident, the bar's co-owner, Jessica Klaus, told the Journal that the ability to offer outdoor table services has been critical.

"If we did not have the outdoor and roadway seating, I think even more people would be filing for bankruptcy right now."

New York Mayor Bill de Blasio declared Open Restaurants a success on Monday, saying it would be renewed next summer. The city said that 80,000 laid-off hospitality workers had returned to work through the program, which will conclude on Oct 31 this year.

"We have seen that this experiment worked," De Blasio told Politico.

It is probably worth it for restaurants and bars to spend the several thousand dollars for furniture, plywood floors, umbrellas, planters and street barriers it can cost to turn parking spaces into dining areas.

The challenges can be considerable.

At Pescatore, an Italian restaurant near the United Nations, staffers have to set up and then take down large traffic barriers each night at 7 pm, as the tables are set up in a rush-hour-only express-bus lane.