Flood-affected villagers’ readiness to help others is hailed nationwide 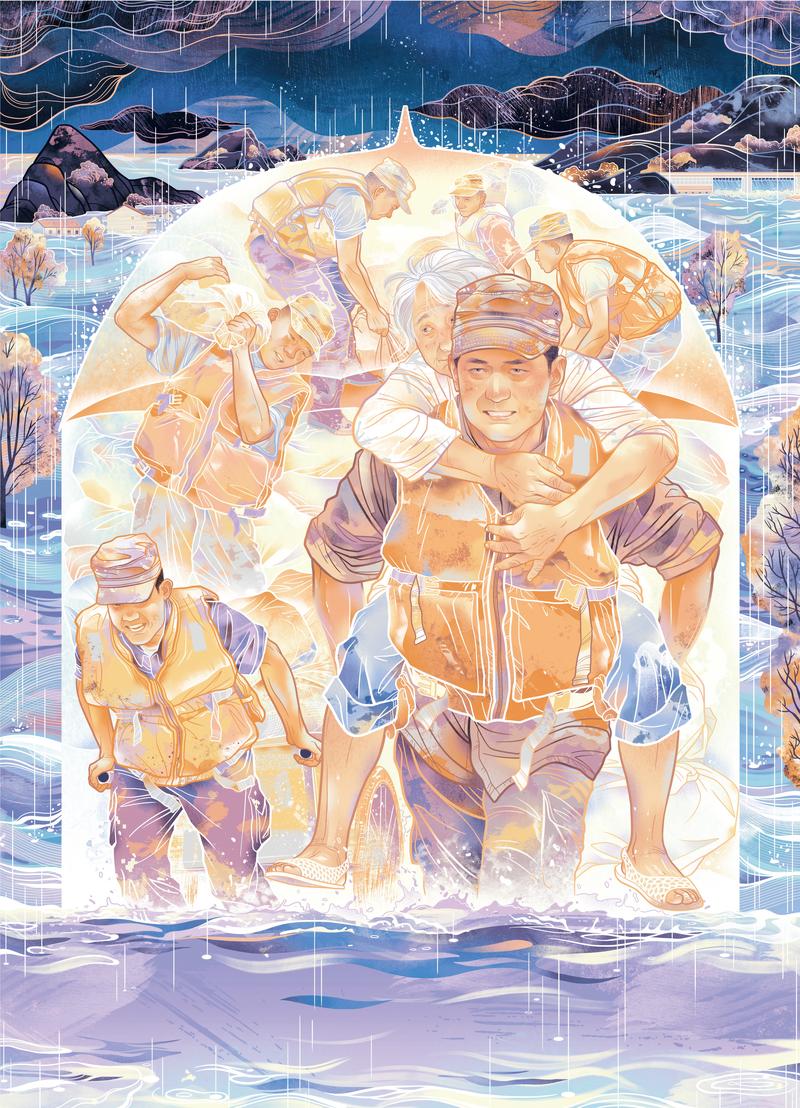 After his village near Poyang Lake in Jiangxi province was hit by ruinous flooding, Huang Guoqi had to abandon his home and move to a disaster relief shelter.

Huang, 50, is from Guihu, a village seriously affected by flooding in Poyang county.

On July 12, water in China’s biggest freshwater lake reached a record height of 22.6 meters, over 3.6 meters above the warning level.

Poyang Lake in the north of Jiangxi is formed from an overspill of the Yangtze River. On July 14, it covered 4,403 square kilometers, some 25 percent more than usual. The spillover was the worst in 10 years.

The lake’s rapid encroachment, visible via satellite, happened through continuous torrential rain and serious flooding on the Yangtze and smaller rivers that provide water for many villages which — including Guihu — have become danger zones.

On July 8, flooding along the Changjiang River, which flows into Poyang Lake, engulfed Guihu, leaving an 80-meter-long cavity along the embankment.

Hearing onrushing water, Huang, then working in his watermelon field, hurried home to move his belongings upstairs. Sensing danger, he realized that was impossible, and ran for his life. “I later discovered home appliances under the water on the ground floor, which was about 1 meter deep. I couldn’t help crying, because I’d never been in such a terrible situation,” Huang said.

Since July 9, more than 800 other affected villagers have been staying at the relief station in a primary school in Poyang, the county seat.

On July 11, Huang returned home — renovated last year — by boat to retrieve clothing. He lives alone; his wife works in Shenzhen, Guangdong province, and his son and daughter are also away.

His children have phoned many times to comfort him, telling him not to worry about lost possessions.

Huang was told the floodwaters will not subside completely until the end of August. With little to do but wait, he is not unduly worried about his farm produce and belongings.

What bothers him most is his son’s wedding, to be held at Huang’s house at year’s end. The house will also need another renovation.

At the shelter, with 17 people sleeping in one classroom, Huang lit a cigarette to calm his nerves. He said he is worried that because of the flooding, he may not have enough money for the wedding.

Since the year started, the family had practically no income — only savings of 200,000 yuan, about half the wedding’s costs, he said.

“We thought my wife, my son and myself could earn some money this year and borrow some from my daughter and other relatives. But now everyone has been affected by the flooding, it will be difficult to borrow,” he said.

Locals recall the severe flooding of 1998, which killed over 3,000 people and displaced 14 million along the Yangtze River Basin. 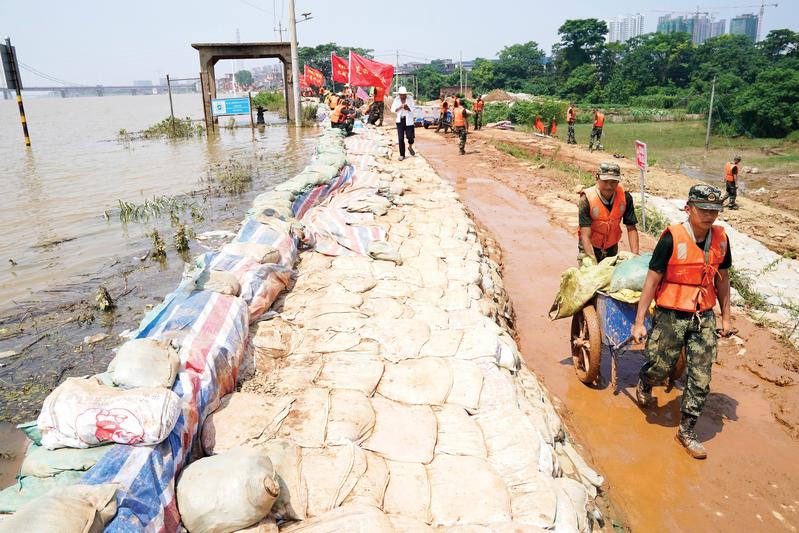 Since June, continuous torrential rain has fallen in many southern areas. Including the Yangtze’s, the rivers’ waters have exceeded warning levels, affecting over 37 million people in 27 provincial-level areas.

Flooding in Jiangxi, Anhui, Hubei and other provinces has left 141 dead or missing, the Ministry of Emergency Management said on July 13.

Floods in 1998 were among the worst since the People’s Republic of China was founded in 1949.

Wu Hejiao, 62, also from Guihu, staying at the relief station with her husband and grandson, said those floods lasted over a month. However, villagers had no relief site; they did not have daily meals or sleep cooled by electric fans, as they do now.

“Many people lived in simple shelters set up on high ground, which lacked showers, enough drinking water and flush toilets. In addition, we were troubled by mosquitoes and other insects.

“Now, the shelter set up at the school is very good and the local government has considered almost everything we need,” she said.

According to a meeting of the Standing Committee of the Political Bureau of the Communist Party of China Central Committee in Beijing on July 17, while carrying out flood control and disaster relief efforts, authorities should also carefully plan reconstruction work to restore production and help people return to normal life as soon as possible. Serious efforts must be made to assist poor, flood-affected residents so that they do not fall back into poverty.

In Fuyang, East China’s Anhui province, Qu Chengying chatted with neighbors in a pavilion on July 21 when armed police arrived in her village with food, medicine and other supplies.

The woman in her 70s, and over 50 residents of Langlou, a village in Funan county, had been isolated since July 20, when the area was flooded. The next day, crops and roads had been submerged.

However, this was no surprise to the villagers. The operation was carried out deliberately — part of a major flood diversion project.

The Wangjiaba sluice gates — near the confluence of the 1,000-kilometer-long Huaihe River several hundred meters from the village, and two other rivers — were opened on July 20. The Huaihe flows from west to east through Henan, Anhui, Jiangsu and Shandong provinces.

The Huaihe River Commission of the Ministry of Water Resources said continuous torrential rainfall in Anhui and Henan on the river’s upper reaches made water levels at the sluice gates reach 29.66 meters at 6:36 am on July 20 — 0.36 meters higher than the safety level. 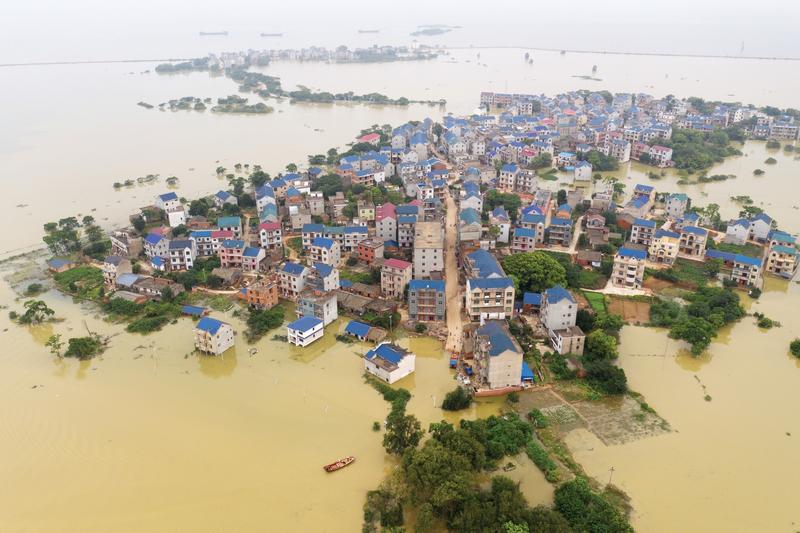 About two hours later, the commission ordered all 13 sluice gates opened. Waters poured into the Mengwa Flood Diversion Area, which includes four townships and is home to about 195,000 people.

The entire area was quickly submerged as 1,626 cubic meters of water poured in per second.

Lu Haitao, a Huaihe River Course Administration official, said: “With a capacity of 750 million cubic meters of water, the area will be used according to the situation on the river.”

In 2007, when the diversion area was last used, it stored 250 million cubic meters of water, Lu added.

When the Huaihe rises above the safety level in Funan, authorities can open the sluice gates — built in 1953 — to let excess water flow into the 180-square-kilometer Mengwa Flood Diversion Area. Administered by Fuyang city, it has been flooded deliberately 16 times since 1954.

The Huaihe River Commission said the waterway rises in the mountains of Henan, and its upper reaches run for 364 km, with the river falling 178 meters over that distance.

The middle reaches, mostly in Anhui, lie between the Wangjiaba sluice gates and Hongze Lake in Jiangsu. This stretch is 490 km long, with the river dropping a mere 16 meters, according to the commission. Founded in 1950, it is headquartered in Bengbu, a riverside city in Anhui, and employs over 3,000 people.

Wu Xu, an expert with the commission, said it was formed to coordinate efforts by governments to manage the waters in different areas along the Huaihe. The river used to flow directly into the Yellow Sea, but as floods have greatly changed its course, it now forms a major tributary of the Yangtze River.

Wu said that over thousands of years, the Yellow River, to the north, repeatedly changed course southward to flow into the Huaihe, creating new highlands and lakes, including Hongze Lake, the largest body of water in the Huaihe’s drainage area.

“The bottom of Hongze Lake is actually higher than the Huaihe riverbed,” he said.

Floodwater runs rapidly along the Huaihe’s upper reaches from Henan into Anhui, but is unable to pass easily through the central stretches and into the Yangtze, he added.

Lu, from the Huaihe River Course Administration, said: “Residents in the diversion area have to make a sacrifice for the good of those on the upper and lower reaches.”

He said the local government and the public’s willing sacrifice has been a key part of the so-called Wangjiaba Spirit, hailed nationwide.

In 2000, the local government launched a project to rebuild villages in the diversion area. The two-story house in Langlou was paid for by the government and stands on ground more than 10 meters higher than nearby fields.

Guo Chang, a Funan transport bureau official sent to Langlou to take care of the villagers, said: “As the residents have all been relocated, flood relief work has become much easier. More than 300 villagers in Langlou have hukou, or household registration, but only 59 people — mostly seniors and children — are living in the village,” he said, as many people have moved across the country for work.

On the night of July 19, the local government issued an emergency notice, ordering the evacuation of these areas.

Yue said more than 2,000 people, along with movable property, were relocated overnight before the sluice gates were opened the next morning.

While the gates were not opened until everyone had reached safety, the operation remained a race against time.