Up against fierce new waves, nations turn to sewage and drones 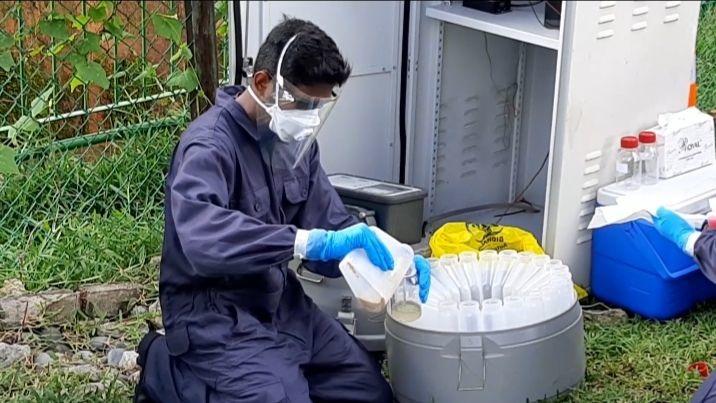 As one of them lowers a yellow rubber tube into the fetid sewer outside a dormitory in central Singapore, a third explains how samples of the brownish liquid provide a crude snapshot of how the city-state is trying to keep a step ahead of the coronavirus.

With countries from Australia to Spain struggling to arrest fresh waves of the contagion, scientists and public health officials are looking to additional tools, including sniffer dogs and drones, to hunt down the insidious virus.

Wastewater surveillance -- which Dutch scientists showed in March can identify evidence of the pathogen earlier than testing patients -- is one of a handful of strategies around the world being developed to pinpoint emerging hotspots and flare-ups before cases spiral out of control.

READ MORE: Dogs hot on the trail of COVID-19 cases

“If you think the community has no COVID, but it’s found in the wastewater, then you know it’s there somewhere,” said Dale A. Fisher, an infectious diseases physician at Singapore’s National University Hospital and chair of the Global Outbreak Alert and Response Network, a group that monitors and reacts to dangerous epidemics.

With countries from Australia to Spain struggling to arrest fresh waves of the contagion, scientists and public health officials are looking to additional tools, including sniffer dogs and drones, to hunt down the insidious virus.

People can transmit the virus before they develop symptoms, frustrating efforts to stem transmission using the mainstay approach -- testing and isolating infected people and tracing their contacts -- alone. Resurgences have occurred in places that have gone months without recording a new infection, forcing governments to impose economically-crippling restrictions again and testing citizens’ tolerance for the disruption wrought by the pandemic.

Monitoring wastewater is a useful way to find the pathogen before it’s identified within a community, said Collignon. Infected people don’t just shed the virus in their respiratory droplets; it may also be in their urine and feces -- sometimes during the incubation period and even after nose and throat tests are no longer positive for the virus.

“A lot of data suggested it predates the increase in clinical cases,” Collignon said in an interview.

Finding the virus in wastewater can serve as an early warning system, and provide a trigger for authorities to start increasing restrictions on people and their movements, he said. “Because if we do it now, rather than waiting for 10 days, we’ll probably see less of an outbreak.”

Finding the virus in wastewater can serve as an early warning system, and provide a trigger for authorities to start increasing restrictions on people and their movements

“You can use sewage testing to adjust the limits you put on the movement of populations over different periods of time.” Collignon said.

That sort of nuance may be useful as the pandemic -- now in its eighth month -- grinds on. Strict social distancing measures are proving harder to enforce in some places, particularly among young people and those who don’t get paid if they’re ill or self-isolating. Another mass lockdown in the Australian city of Melbourne has proved less effective the second time around with some defying the restrictions.

Wuhan, the central Chinese city where Covid-19 first emerged in December, is routinely testing sewage and environmental samples from hospitals, markets and shopping malls. No traces of the virus have been found in wastewater since the data were made available in mid-June.

In Singapore, an explosion in cases among migrant workers caught authorities off guard, triggering a pivot in its approach to the virus. The country started a a pilot program to monitor wastewater in April, focusing on the dormitories that accommodate the workers, infections among whom have pushed Singapore’s case tally beyond 52,000. Testing of wastewater has since been expanded to include other population-dense centers such as hostels and residential care facilities.

Other alternative surveillance methods that don’t require people to front up for testing are also being deployed elsewhere. 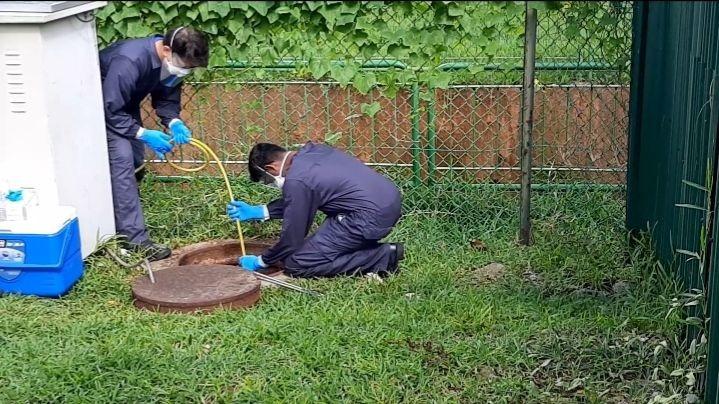 Scientists insert a rubber tube into the manhole outside a foreign workers' dormitory to collect wastewater samples. (PHOTO / BLOOMBERG)

Separate teams in Germany, the UK, France, Finland and Australia are training dogs to sniff out people with the coronavirus, counting on the animal’s ultra-sensitive noses to detect metabolic changes in COVID-19 that the patients themselves may not notice.

Separate teams in Germany, the UK, France, Finland and Australia are training dogs to sniff out people with the coronavirus, counting on the animal’s ultra-sensitive noses to detect metabolic changes in COIVD-19

An international team aims to have dogs trained in months for “low cost, instantaneous and reliable screening” at airports, hospitals and quarantine sites, according to the University of Adelaide, in South Australia, which is helping to study the sensitivity and specificity of “canine olfactory detection” of Covid-19 against standard lab tests.

In the same city, researchers at the University of South Australia are working on “pandemic drones” that have specialized sensor and computer vision systems to spot people with the telltale signs of a respiratory infection in crowds. They could be used in offices, airports, cruise ships, residential care facilities and other places where groups of people may work or congregate.

In South Korea, widely lauded for its success in suppressing the pandemic with out disruptive measures like lockdowns, health officials in Seoul have relied on their version of Navy Seals -- elite teams of epidemiologists, laboratory technicians and database specialists -- to identify infected people early in order to curb spread.

Authorities say they have compressed the time it takes to trace contacts with those infected from one day to 10 minutes, potentially limiting the scale of infections through speedy intervention. But their speedy response also relies on a wide range of data collected by mobile carriers, credit card issuers, the surveillance cameras that are ubiquitous in cities like Seoul and lately a QR code registering system installed at entertainment venues to pin down potential contacts.

To be sure, most of these alternative methods aim to seek out vestiges of the virus in places where it isn’t apparent, making their relevance where the illness is widespread, such as parts of the U.S. and some developing countries, questionable.

Wastewater surveillance is a “blunt tool” that’s not helpful in places where the virus is circulating widely, said Fisher at the National University Hospital. Researchers at Shanghai’s Tongji University found the pathogen was harder to detect in sewage after toilets were cleaned with chlorine and other disinfectants.

But as the world anxiously awaits the development of safe and effective vaccines, a combination of active monitoring and early intervention is the only sure way to gain control over the stealthy virus, according to Collignon at the Australian National University.

“This is an essential public health measurement that needs to be done not only now but continuously, and the results need to be available for everybody to see within 24 hours,” he said. “People have to act on the results, not just assume it’s a research project.”