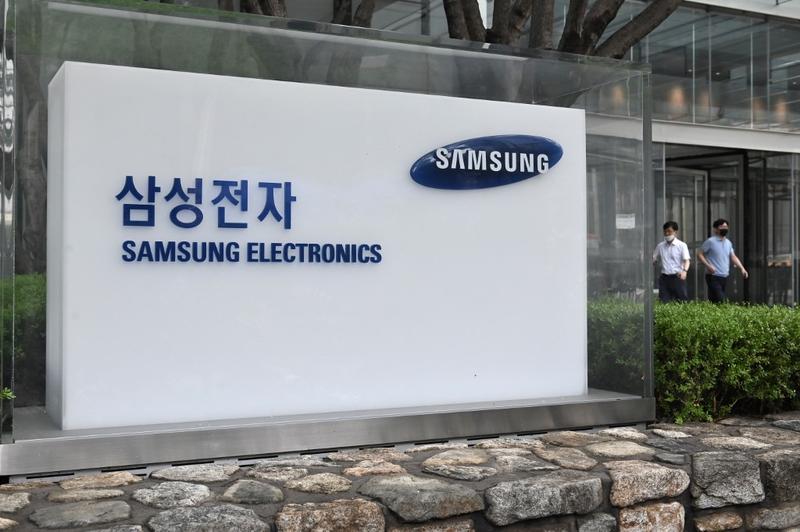 People walk past the logo of Samsung Electronics at the company's Seocho building in Seoul on July 30, 2020. (JUNG YEON-JE / AFP)

SEOUL - Samsung Electronics Co Ltd expects a global recovery in demand for smartphones and consumer electronics to underpin profits in the second half of the year, after a coronavirus-propelled shift to online working boosted quarterly earnings.

Samsung, the world’s top maker of memory chips, tempered its relatively upbeat forecast when announcing second quarter results on Thursday with a warning that the pandemic and trade disputes posed ongoing risks for earnings.

Samsung posted a 23 percent jump in operating profit in the April-June quarter on the back of strong DRAM memory chip sales to online server providers, along with cuts in marketing costs.

Prices for the chips, which create temporary workspaces to allow devices to multitask, spiked in the second quarter as people shifted to working and learning online from home because of the pandemic. Samsung’s Korean peer SK Hynix and US firm Micron Technology Inc also benefited from the trend.

Samsung said it expected server demand for chips to remain solid for the remainder of the year and a boost in smartphone demand, given planned product launches and anticipated demand for 5G-capable phones.

Still, Samsung and other Asian tech companies in the global supply chain have been rocked by trade tensions between the United States and China that has put cross-border trade in components, devices and technology at the mercy of politics.

“Given many uncertainties including COVID-19, trade tension and that customers may change their inventory and investment strategies, it’s still difficult to say when (DRAM) price will hit an inflection point,” senior vice president of memory business Han Jin-man said.

The company would keep a close eye on chip inventory levels at data centre firms who stockpiled in the first half to meet telecommuting demand, he said.

SK Hynix and some analysts have painted a more downbeat outlook, expectating a fall in DRAM chip prices.

“Demand for the second half ... will be relatively weak ... but it’s not going to be a hard landing as the market had feared,” said Choi Young-san, analyst at E-Best Securities.

During the quarter, China’s Huawei overtook Samsung as the world’s biggest seller of phones, shipping 55.8 million devices to Samsung’s 53.7 million, according to research firm Canalys.

Huawei’s rise was spurred by sales in China, where fresh COVID-19 cases are low, but Samsung is likely to gain back market share as demand in other countries recover.

Samsung plans to unveil new flagship smartphones, including the Galaxy Note and a foldable phone in the second half, as well as expand sales of mid-tier models.

Samsung also said its display business, which makes screens for mobile phones, TVs and monitors and counts Apple Inc as a customer, is expected to improve late this year as set makers launch new products to meet demand from lockdowns easing and people shopping for year-end holidays.