US withdrawal opens way for terror alliance in Afghanistan 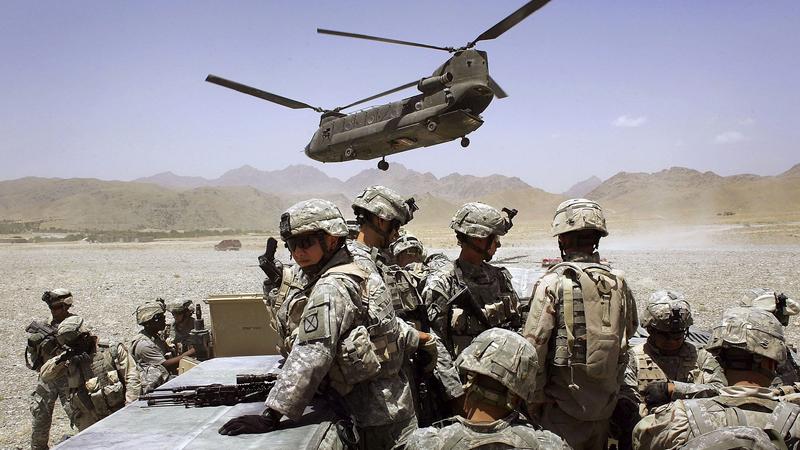 In this file photo, American soldiers from the 10th Mountain Division deploy to fight Taliban fighters as part of Operation Mountain Thrust to a US base near the village of Deh Afghan on June 22, 2006 in the Zabul province of Afghanistan. (PHOTO / GETTY IMAGES VIA BLOOMBERG)

An alliance of terror groups aimed at destabilizing peace in South Asia is emerging in Afghanistan as US troops pull out of the war-ravaged nation, security officials said.

The alliance is planning to step up attacks in other regions in South Asia, including against troops in India’s Kashmir, they said

Pakistan-based militant organizations, the Lashker-e-Taiba and Jaish-e-Mohammed, the Afghan Taliban and Islamic State-Khorasan, the local affiliate of the terror group, have come together to carry out raids on Indian assets in Kabul and also attacked a Sikh temple in the city, the officials said, requesting not to be identified citing rules on speaking to the media.

The alliance is planning to step up attacks in other regions in South Asia, including against troops in India’s Kashmir, they said.

A surge in terrorist activity in South Asia, home to quarter of the world’s population and a third of its poor, could result in diversion of resources needed to pull millions out of poverty in the region. There’s also a risk it may lead to a confrontation between nuclear-armed India and Pakistan, after an attack on Indian forces in Kashmir brought them to the brink in 2019.

“The longstanding fear has been that such groups would simply ‘wait out’ the US and international presence, and that once the international presence was gone, they would destabilize Afghanistan and the larger region,” said Alyssa Ayres, Washington-based senior fellow at the Council on Foreign Relations and a former US deputy assistant secretary of state.

The US is pulling troops out of Afghanistan following a peace agreement with the Taliban. President Donald Trump, who is seeking re-election, had pledged to get his country out of “endless wars.” The US has already reduced forces to about 8,000 and handed over some bases to the Afghan government.

Press officials at the Pentagon and State Department didn’t immediately respond to a request for comment.

ALSO READ: Pentagon: US troops withdrawn from 5 bases in Afghanistan

Afghanistan’s president, Ashraf Ghani, offered a note of optimism as he welcomed a Taliban announcement declaring a three-day cease-fire during the upcoming Eid al-Adha festival. Ghani expected to begin peace talks with the group within a week, his spokesman, Sediq Sediqqi, said on Twitter.

Shortly after Ghani’s remarks, Taliban spokesman Zabihullah Mujahed confirmed the cease-fire in a statement, but warned that attacks “must be met with a strong response.” The Taliban announced a similar three-day truce in May for the Eid religious holidays.

The Taliban were “maintaining good relationship” with regional and international terrorist organizations, including al-Qaeda, Islamic State, LeT and others, said Javid Faisal, the spokesman for Afghanistan’s National Security Council.

In this handout photograph taken and released on May 25, 2020 by Afghanistan's National Security Council, Taliban prisoners wave inside a vehicle during his release from the Bagram prison, next to the US military base in Bagram, some 50 kms north of Kabul. (PHOTO / AFGHANISTAN'S NATIONAL SECURITY COUNCIL / AFP)

“This partnership between these terrorist organizations and the Taliban isn’t just destabilizing Afghanistan or this region, but the entire world,” Faisal said. “They were supposed to cut off their ties to these terrorist groups long ago, they haven’t done yet and they won’t do as they all share the same ideology.”

Indian officials pointed to an attack on the oldest Sikh temple in Kabul in March, which left 25 dead, as well as counter terror operations in the Nanghar Province in April where 14 terrorists belonging to Pakistan-based militant groups and the Taliban were killed, as examples of the tie-up. Multiple joint training facilities have been set up in southern and central Afghanistan to carry out frequent attacks, they added. A spokesman for the internal security ministry declined to comment.

The attempts at peace is altering the power dynamics in Afghanistan, a senior Indian official said. Mirroring the warnings, a recent report of the United Nations pegged the total number of the Pakistani nationals fighting along side terrorist groups in Afghanistan may be as high as 6,500.

The South Asian region’s historical disputes are also hindering a coordinated response to this threat. At the heart of the animosity between India and Pakistan is the Kashmir region, governed in part by the neighbors but claimed in full by both.

Pakistan said US troop withdrawal won’t lead to an increase of violence in the region, adding that the Kashmir situation was becoming volatile due to its mishandling by India. Prime Minister Narendra Modi’s government scrapped a key status for Jammu and Kashmir state last year and imposed federal rule.

“Trying to link the post-US withdrawal Afghanistan to Kashmir issue is another malicious attempt by India to keep the region in a state of flux,” Pakistan’s defense forces media wing said in a statement. “The so-called intelligence reports alleging Pakistan to be following some kind of strategic design are simply baseless and laughable.”

The Taliban’s Mujahed denied any links with the Islamic State or terror groups based in Pakistan.