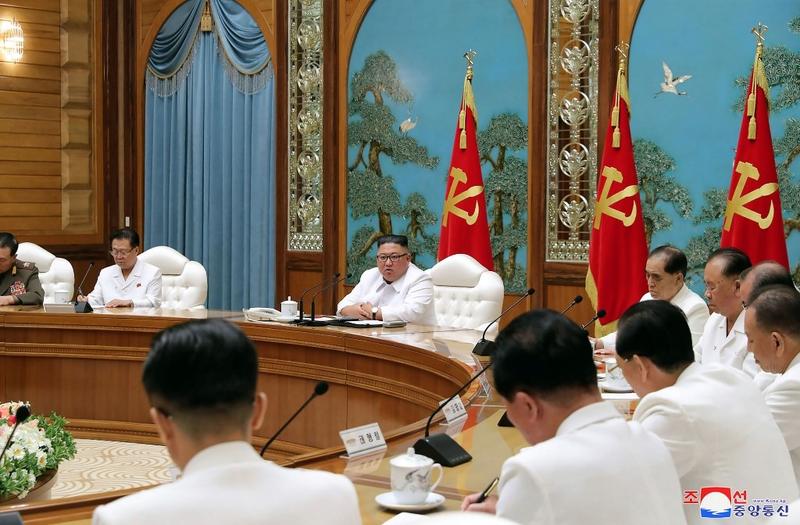 "There happened a critical situation in which the vicious virus could be said to have entered the country," Kim said on Saturday as he presided over an emergency meeting of the Political Bureau of the Central Committee of the Workers' Party.

Given the dangerous situation in Kaesong city, Kim Jong-un said he has decided to shift from the state emergency anti-epidemic system to the maximum emergency system and issue a top-class alert

Kim said he took preemptive measures on Saturday to completely block Kaesong city and isolate each district and region immediately after the case was reported.

Given the dangerous situation in Kaesong city, Kim said he has decided to shift from the state emergency anti-epidemic system to the maximum emergency system and issue a top-class alert.

According to the KCNA report, all those who had contacted the suspected case and those who had been to Kaesong city in the past five days would be given medical examination and put under quarantine.

The suspected case, a defector who returned to the DPRK city of Kaesong from the Republic of Korea (ROK) on July 19 after illegally crossing the demarcation line, was put under strict quarantine as a primary step, said the KCNA.

ROK’s Joint Chiefs of Staffs (JCS) said there was a “high chance” that someone had indeed crossed and the military was checking surveillance footage. It even suggested it might be able to identify the person.

“Our military has specified some people and is verifying facts in close collaboration with related agencies,” the JCS said.

If confirmed, it would be the first case officially acknowledged by DPRK authorities, who have so far said the country has no confirmed cases of the new coronavirus.

Australia’s second-most populous state, Victoria, recorded 459 cases of the new coronavirus, the second-highest daily total and up from 357 cases the previous day, the state’s leader said on Sunday.

Premier Daniel Andrews also said at a press briefing that Victoria had reported 10 fatalities in past 24 hours, Australia’s highest ever daily. Seven of the 10 deaths were associated with outbreaks in aged-care facilities, where there are 560 known cases. The death toll on Sunday included a man in his 40s, the premier said.

The state’s second wave is being driven by workplace infections, including at aged-care and healthcare facilities, big distribution centres, slaughterhouses, cold-storage facilities and warehouses, Andrews said.

Meanwhile, New South Wales, Australia's most populous state, recorded 14 new cases overnight, with almost half connected to a known outbreak at a restaurant on the outskirts of Sydney.

Senior Health Ministry official Nasima Sultana said at a media briefing that 54 deaths were reported in the last 24 hours across the country, raising the death toll to 2,928.

She said the total number of recoveries stood at 123,882, including 1,792 newly reported recoveries.

Cambodia on Saturday confirmed 23 new imported COVID-19 cases, bringing the total number of infections in the country to 225, according to a statement issued by the health ministry.

Eight of the new cases involve four Cambodians and four Indonesians who arrived in Phnom Penh, capital of Cambodia, on July 23 through two different flights, the ministry's secretary of state and spokeswoman Or Vandine said in the statement.

She added that the remaining 199 passengers on the two flights have been placed under a 14-day mandatory quarantine at various quarantine centers in the capital.

The other 15 new cases involve Cambodians who returned to the country on July 19 from Russia and Egypt, with a connecting flight in Malaysia, Vandine said, adding that the results of their first two tests returned negative.

According to officials, 885,577 people have been discharged from hospitals, and the number of active cases in the country stood at 467,882. 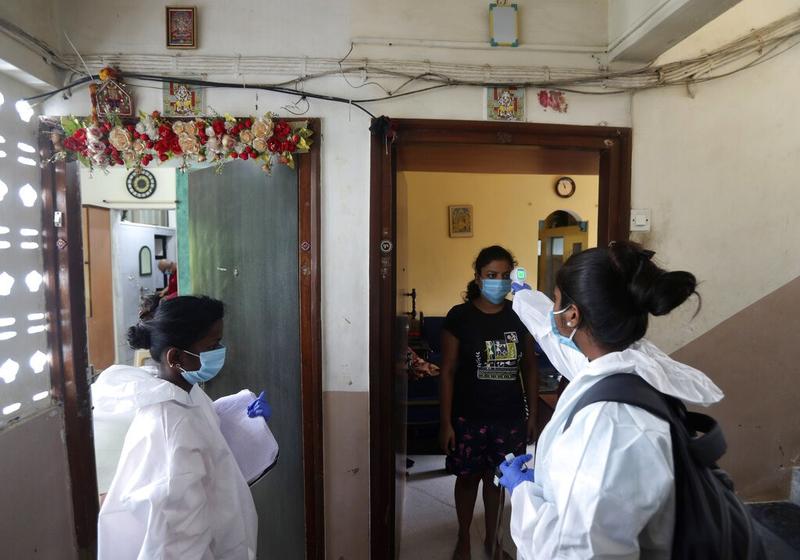 The number of deaths in the Southeast Asian nation related to COVID-19 rose by 67, raising the death toll to 4,781, the data showed.

Iranian President Hassan Rouhani urged people on Saturday to observe health protocols and practice social distancing during upcoming Muslim festivities, as a health official said there had been a surge in coronavirus infections in a major holy city.

Muslims around the world mark the Eid al-Adha feast, due to start at the end of the month. Most Iranians are Shi’ite Muslims, who also mark their most significant mourning ceremonies of Ashura in September.

Deputy Health Minister Iraj Harirchi, speaking on state television, urged people not to visit the northeastern holy city of Mashad, which he said has seen an increase of 300 percent in coronavirus cases over a one month period. Millions typically visit Mashad’s Imam Reza shrine, which is Iran’s largest Shi’ite religious complex.

The Iraqi health ministry on Saturday recorded 2,862 new COVID-19 cases, the highest daily increase since the outbreak of the disease, bringing the infection tally in the country to 107,573.

The new cases showed a hike in infections in the capital Baghdad with 1,136 cases, followed by 251 cases in Basra, 226 in Wasit, 208 in Karbala and 155 in Babil, the ministry said in a statement.

It also reported 72 more fatalities, raising the death toll to 4,284, while another 2,049 patients have recovered, bringing the total number of recoveries to 73,317.

The number of people who have tested positive for the coronavirus in Israel topped 60,000 on Saturday as the government struggles to contain a resurgence in infection rates.

With a population of 9 million, Israel has reported a total of 455 fatalities from the pandemic.

While Japan was spared the kind of surge in infections that have killed tens of thousands in other countries, Tokyo has raised its coronavirus alert to the highest level after a series of new cases.

Governor Yuriko Koike on Saturday urged residents to wear masks and take precautions to curb the spread of the virus.

Japan's nationwide infection tally topped 30,000 on Saturday, according to the latest figures from the health ministry and local authorities, including cases from the Diamond Princess cruise ship that was quarantined in Yokohama near Tokyo.

The death toll stood at 1,009 people, including 13 from the Diamond Princess.

Kyrgyzstan will designate July 30 as the day of national mourning for citizens who died of COVID-19, President Sooronbai Jeenbekov said on Saturday.

As of Saturday, 1,249 people have died in Kyrgyzstan since the beginning of the COVID-19 pandemic.

Kuwait will end the strict lockdown imposed in Farwaniya governorate from 5 am (0200 GMT) on Sunday, the centre for government communication announced on Twitter on Saturday.

Farwaniya was the last area to be effectively isolated in a country which has reported 63,309 coronavirus cases and 429 deaths.

Lebanon's number of COVID-19 infections increased on Saturday by 175 to 3,579, and the death toll rose by one to 47, the National News Agency reported.

New Zealand reported no new cases of COVID-19 overnight, said the Ministry of Health in a statement on Sunday.

The total number of confirmed cases remained at 1,206.

The number of active cases in New Zealand's managed isolation and quarantine facilities stood at 21. It was said that there was no one receiving hospital-level care for COVID-19.

Oman reported on Saturday 1,067 newly confirmed cases of COVID-19, bringing the total number of infections in the country to 74,858.

According to a statement issued by the Ministry of Health, 1,054 more patients of COVID-19 have recovered, bringing the total recoveries to 54,061.

Another 12 deaths were reported, raising the death toll to 371.

According to local media, the Omani government decided to ban travel between governorates from July 25 to Aug 8. The country also decided to close all public places and shops from 7 pm to 6 am every day during that period.

Palestine on Saturday said that 382 new cases of COVID-19 were confirmed, bringing the infection tally to 12,809.

The ministry said the number of recoveries reached 3,741, leaving 8,991 active cases under medical observation. There were 15 patients who are currently in intensive care units, including three who are connected to respirators.

The Philippines on Sunday reported 39 deaths related to the novel coronavirus and 2,110 additional infections.

The country's death toll now stands at 1,932 while the infection tally rose to 80,448 confirmed cases, the Department of Health said in a bulletin.

"Some 330 people recovered, bringing the total number of recoveries to 105,750, while the fatalities remained 164 for the second day running," the official Qatar News Agency reported, quoting a statement by the ministry.

SK Bioscience, the ROK pharmaceutical company backed by Bill Gates, may be capable of producing 200 million coronavirus vaccine kits by next June, the Microsoft Corp. co-founder said in a letter to ROK President Moon Jae-in.

Gates is seeking to cooperate closely with ROK, the presidential office in Seoul said Sunday, citing the July 20 letter. The US billionaire and Moon spoke by phone in April about teaming up to fight the virus and develop a vaccine, the Blue House said in a text message.

The death toll remained at 298 as no additional deaths were reported while the number recoveries rose by 24 to 12,890.

Singapore reported 481 more infections on Sunday, bringing the total number of cases in the city-state to over 50,300.

Singapore will start human trials as early as this week for a COVID-19 vaccine being developed by Duke-NUS Medical School and American pharmaceutical company Arcturus Therapeutics, the Straits Times (ST) reports.

"Lunar-Cov19" is among 25 vaccine candidates globally to reach human-trials stage and will be tested on 108 healthy volunteers of various ages in Singapore, ST said.

Turkey's COVID-19 cases increased by 921 to a total of 225,173 on Saturday, Health Minister Fahrettin Koca said.

A total of 1,103 patients recovered in the last 24 hours, raising the total recoveries to 208,477 in Turkey, Koca said, adding that 1,252 patients are currently being treated in the intensive care units, with 386 being intubated.

The United Arab Emirates (UAE) on Saturday announced 313 new COVID-19 cases, bringing the total number of confirmed cases in the country to 58,562.

A total of 393 more patients have recovered, taking the tally of recoveries in the UAE to 51,628, according to the Ministry of Health and Prevention.

No deaths were reported in the past 24 hours.

Vietnam reintroduced social distancing measures in the central city of Danang on Sunday after a second locally transmitted novel coronavirus case was detected there, more than three months after any cases were reported in the country.

The Southeast Asian country was back on high alert after the government on Saturday confirmed its first community infection since April, and another case early on Sunday, both in Danang, a tourist hot spot.

Authorities gave no more details about how the two infections were contracted and did not say if they were believed to be linked.

The city’s social distancing measures would come into force until further notice, the government said in a statement on its website.

Danang would stop receiving inbound tourists for 14 days, while all religious, sports and cultural events would be suspended.

Wearing masks in public places in the city is now compulsory and gatherings of more than 30 people at public places were banned, the government said.

Vietnam has kept its virus total to an impressively low of 418 cases, with no deaths.