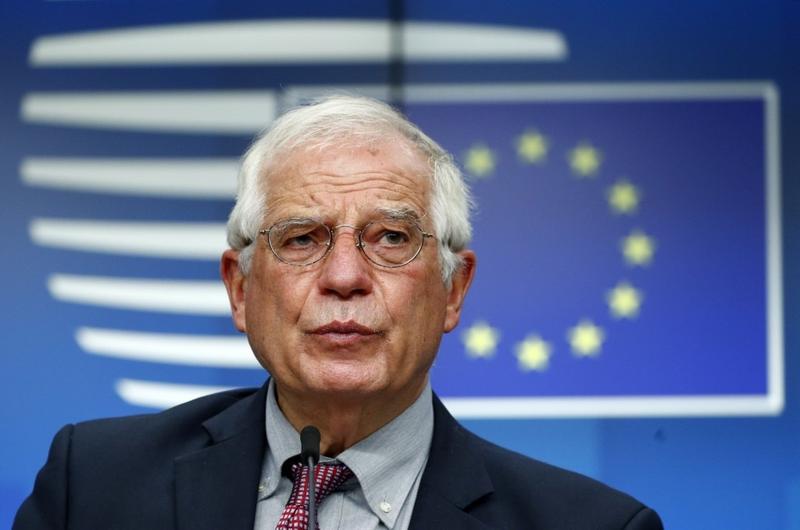 Foreign ministers of the European Union's 27 member states meeting in Brussels on Monday sought to ease their growing tensions with Turkey, a candidate vying to be part of the bloc.

The EU's High Representative for Foreign Affairs and Security Policy Josep Borrell said after the meeting that there was a consensus among member states that EU-Turkey relations were currently under strain because of worrying developments affecting the EU's interests, in particular in the Eastern Mediterranean and Libya.

"Ministers agreed that several serious issues had to be addressed by Turkey in order to change the current confrontational dynamic, and create an environment of trust," he told a news conference after the meeting.

Turkey was the major topic of the Monday meeting, the first in-person meeting of the EU's Foreign Affairs Council since the COVID-19 lockdown in March.

"Turkey's unilateral actions, in particular in the Eastern Mediterranean, which run counter to EU interests, to the sovereign rights of EU member states and to international law, must come to an end," Borrell said.

Greek Foreign Minister Nikos Dendias has been pushing for sanctions against Turkey for "violating the sovereign rights of Greece and Cyprus" over Turkey's energy exploration in the Eastern Mediterranean. He appeared satisfied with the Monday meeting.

"There was a broad consensus to make, after we requested for it, a list with further measures, which means sanctions which will allow the EU to respond efficiently if Turkey goes on with its offensive/violating behavior," he said.

Borrell indicated that the council had asked him to prepare "further appropriate measures that could be taken in response to the challenges that we are facing as a result of Turkish actions".

Turkey's Foreign Minister Mevlut Cavusoglu on Monday called the sovereign rights claimed by Greece "unacceptable". He said Turkey has expressed its readiness for a dialogue to find a just, equitable and peaceful solution.

"Unfortunately, the response has been hostility to Turkey.... This leaves us with no choice but to continue our drilling and exploration activities in the Eastern Mediterranean to protect our national interests and the equal rights of Turkish Cypriots," he wrote in an op-ed article published on Politico website on Monday.

On Monday, EU foreign ministers also called on Turkey to contribute actively to a political solution in Libya, and to respect the commitments it had made in the framework of the Berlin process, including the UN arms embargo.

Key to the issue is the rising tension between Turkey and France, both NATO members. The two governments support opposing sides in the Libyan civil conflict. Turkey backs the United Nations-recognized government in Tripoli while France backs eastern-based militia forces led by Khalifa Haftar.

Cavusoglu has accused the EU of failing to come up with concerted action because its member states support different sides in the conflict. He said the EU's Operation Irini in the Mediterranean, which aims at enforcing an arms embargo on Libya, is practically sanctioning the legitimate government.

EU foreign ministers on Monday also condemned the Turkish decision last week to convert the Hagia Sophia back into a mosque.

"There was broad support to call on the Turkish authorities to urgently reconsider and reverse their decision," Borrell said.

Cavusoglu said on Monday that Turkey will inform the UNESCO about converting the museum in Istanbul into a mosque.

"I believe we can expect further deterioration," Carl Bildt, a former Swedish prime minister and now co-chair of the European Council on Foreign Relations, said in a tweet on Monday, referring to EU-Turkey tensions in Libya and the Eastern Mediterranean.