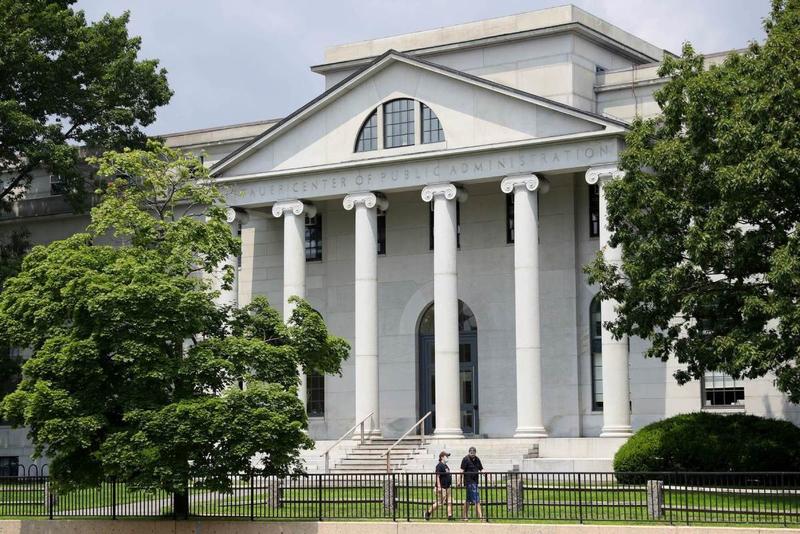 Harvard University, which with the Massachusetts Institute of Technology, is suing the US government over the new visa policy. (MADDIE MEYER / AFP)

For more than a year, Jack Ling, a graduate student at the University of Southern California, has been stuck in limbo trying to renew his visa.

Since submitting additional documents to the US consulate in Shanghai in March, he has not heard back.

He has had to delay his plan to return to the United States to complete his studies in materials engineering for another semester, as the university has decided to move to online classes for the fall term due to the coronavirus pandemic.

But even if he were to obtain a visa and return to the country, he faces another obstacle.

On July 6, US Immigration and Customs Enforcement, or ICE, announced that students on F1 and M1 visas for academic and vocational study may not remain in the country if they take a full online-only course load for the fall semester.

Under the new rule, the US State Department will not issue visas to students enrolled in schools that operate under an online-only course model, and US Customs and Border Protection will not allow such students to enter the country.

Ling expected to graduate this year, but is now not sure if he can complete his degree through remote learning.

Julie Pearl, CEO of the Pearl Law Group in San Francisco, said the ICE directive pressures US universities to reopen, despite their concerns for health and safety as the number of COVID-19 cases continues to rise around the country. The decision shows a lack of humanity, she said.

"ICE is needlessly pulling the rug from under gifted students who have nowhere else to go at such short notice, and no control over whether their universities move to 100 percent online courses," she said. "While many top universities are trying to accommodate them with some physical classes, they cannot compel faculty nor students to take health risks."

According to The Chronicle of Higher Education, which is tracking the reopening plans of nearly 1,100 colleges and universities, about 8 percent of the institutions are offering online courses only, including the University of Southern California and Harvard University.

Harvard, where overseas students comprise more than 20 percent of the intake, and the Massachusetts Institute of Technology, with foreign undergraduates account for nearly 30 percent of the student body, are suing the US government in an attempt to block the new regulation.

The institutions claim the regulation is "arbitrary and capricious"－arguing that the agency is not considering the health of students, faculty and staff members－and has not taken into account the "reality "of the pandemic continuing. 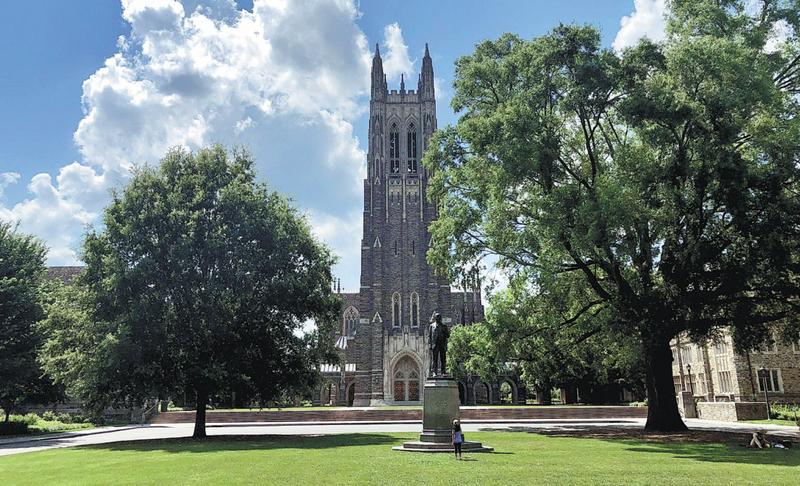 Duke University in Durham, North Carolina, announced on Monday that it had filed an action in support of a lawsuit against the US government. (CHEN MENGTONG / CHINA NEWS SERVICE)

About 200 higher education institutions have filed an amicus brief opposing the new policy. Such a brief may be filed with an appellate court, including a supreme court, by a party not involved with a current case, but in support of one side or another on the legal issue involved.

Although ICE suggests that to comply with the legal requirements of the new regulation overseas students can transfer to a school with physical instruction, college admission experts said this is not workable.

Elizabeth Venturini, an international college admissions expert in California, said, "It is not feasible for most students. International families try to make the best college decision based on academic, social and financial fit. It is critical to get it right the first time, rather than try to get another degree because the first one didn't work out."

She added that switching schools can mean attending one that does not have a well-known program or the right degree, loss of an internship, inability to transfer class credits and a longer time to graduate.

"Also, the school may not be the right social fit in terms of student demographics, location, interests or culture. It's an ivy-covered jungle with student transfer rates, transfer application requirements and deadlines."

Ted Mitchell, president of the American Council on Education, which represents more than 1,800 college and university leaders, said the policy does not consider the global travel ban during the pandemic. This means a student may be unable to return to a country that has closed its borders if his or her school reopens physical classes and then switches to remote instruction midway through the fall semester.

US visa requirements typically do not allow international students to take more than one course－or three credits－online each semester, but those requirements were relaxed earlier this year when the pandemic forced colleges nationwide to switch to virtual instruction.

On July 2, the American Council on Education and 38 other groups wrote to the US State Department and the Department of Homeland Security, seeking flexibility into the next academic year, only to receive what Mitchell described as "horrifying "guidance four days later.

"At a time when institutions are doing everything they can to help reopen our country, we need flexibility, not a big step in the wrong direction. Iron-clad federal rules are not the answer at this time of great uncertainty," Mitchell said. 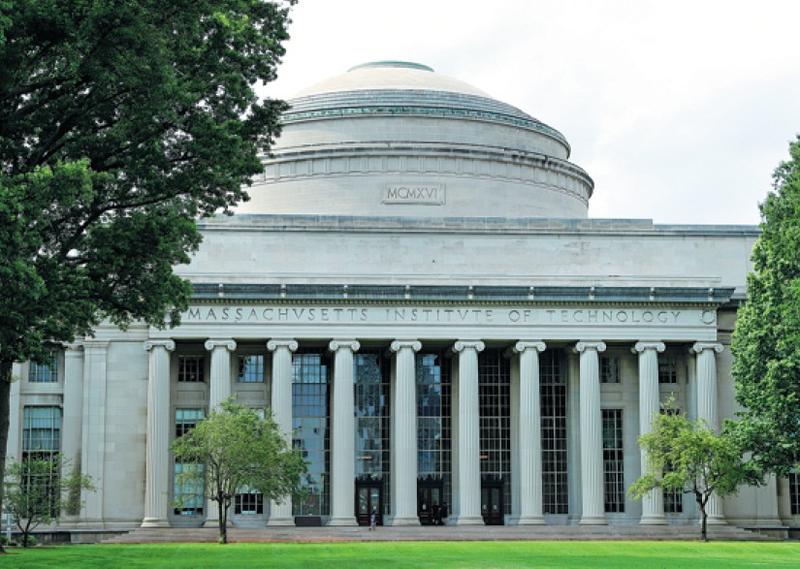 The Massachusetts Institute of Technology has launched a lawsuit with Harvard University. (PHOTO PROVIDED TO CHINA DAILY)

The new policy follows an executive order signed by US President Donald Trump last month to suspend certain work visas through the end of this year to "protect American jobs" during the pandemic. The visas most affected include H-1B and L-1 documentation for high-skilled workers and executives.

Pearl, from the Pearl Law Group, warned that this policy has a wider, more damaging economic impact on the US' ability to compete and grow.

As with the administration's H-1B and L-1 visa bans issued by executive order, the threat to withdraw F-1 visas sends a chilling message to US companies and the foreign-born talent they hire, she said.

The H-1B program is important to many international students who use the visa as a pathway to live and work in the US. Companies in Silicon Valley, California, also rely heavily on the program to fill high-skilled jobs.

However, the US government has been tightening restrictions on student visas and cracking down on the H-1B program, with the stated aim of putting America first.

Pearl said: "It's shutting off the pipeline of talent at its earliest source. These are the world's most sought after students, many of whom go on to US graduate schools and then work in companies to help improve the US balance of trade. They enable innovation and employment in a variety of industries.

"They become the doctors and scientists helping us to fight COVID-19, and also innovators at Fortune 500 companies fueling the economy."

Data from the National Science Board show that most advanced degrees awarded by US universities in the fields of STEM (science, technology, engineering, mathematics) go to foreign nationals.

While urging the government to adopt talent-oriented immigration policies, the American Chamber of Commerce said, "US scientific, engineering and health communities cannot hope to maintain their present position of international leadership if they are unable to hire and retain highly educated foreign talent."

"By being the first administration since World War II to claw back, without fair notice, the status already given to gifted students and other foreigners－including some visa holders whose spouses and children are stuck outside the US due to the previous immigration order－America takes a dark step backwards," she said. 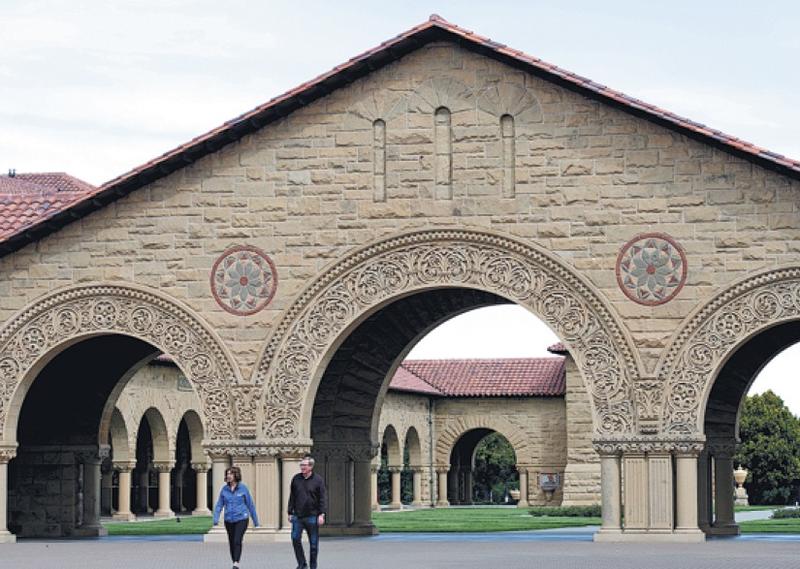 Stanford University announced on Monday that it had joined the lawsuit. (PHOTO PROVIDED TO CHINA DAILY)

The ICE directive prohibiting overseas students from taking online-only classes in the US sparked a backlash from elected officials as well as immigrant advocates.

In a letter dated July 9, Senators Elizabeth Warren and Edward J.Markey, Representative Ayanna Pressley and other members of Congress urged the heads of ICE and Homeland Security to withdraw the new policy.

The lawmakers described the policy as "arbitrary", "irrational" and "xenophobic".

The letter stated: "We are concerned that ICE's guidance is motivated not by public health considerations, but rather by animus toward immigrants, with the goal of forcing schools to reopen even as COVID-19 cases are rising, and by a desire to create an illusion of normalcy during this unprecedented public health emergency."

Cynthia Choi, co-executive director of the advocacy organization Chinese for Affirmative Action, said: "This is no time to be playing politics with our public health or our immigration policy. This reckless maneuver only makes the pandemic situation worse by putting schools and students in an impossible predicament.

"But this administration has shown they are more interested in demonizing immigrants, as well as international students and scholars, especially those from China, to score xenophobic political points."

On May 29, the US government announced it would cancel the visas of thousands of Chinese graduate students and researchers with links to the Chinese military.

Education experts are concerned that the pandemic will make US colleges and universities, which have seen a decline in international enrollment in recent years, less attractive.

Venturini said, "When parents pay for their children to attend a highly prestigious school, they expect an educational experience－not online courses and a digital diploma.

Mitchell said about 1 million international students attend US colleges and universities annually. They contribute greatly to the country's intellectual and cultural vibrancy, produce an estimated inflow of US$41 billion, and support more than 450,000 US jobs.

As the discussion on visa restrictions appears to be changing on a daily basis in the US, there will be increased competition for these students as they consider their options to study elsewhere overseas, she said.

Pearl said, "Other countries are actually trying to attract and recruit the brilliant minds that transform the future economy and elevate society, from the sciences to the arts.

"These are the people who relied on our Approval Notices and rearranged their lives months ago. They have options in Australia, Canada, Ireland and other welcoming nations, whose global standing will improve through this inadvertent gift from the US. The effect of this message will be felt for years and possibly decades to come."