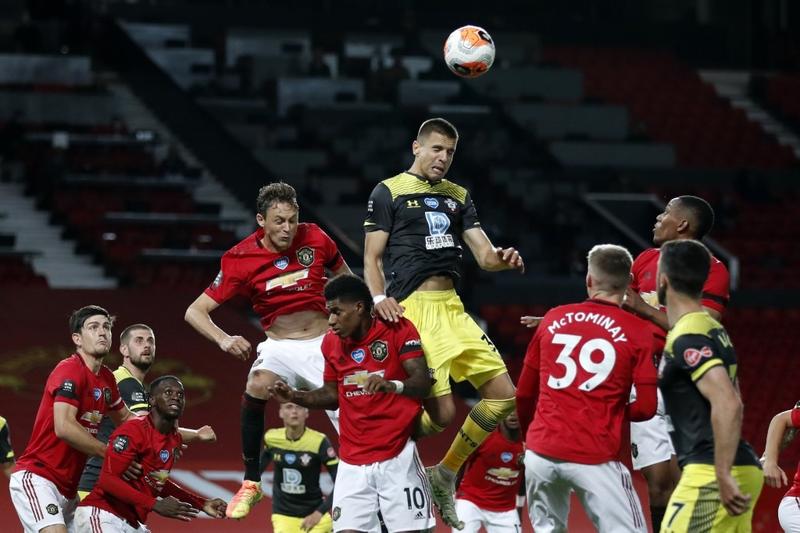 Manchester United had to finish the game with 10 men after Brandon Williams went off injured, with manager Ole Gunnar Solskjaer having no substitute opportunities

United, unbeaten in 18 games in all competitions, were poised to move up to third after Anthony Martial’s 23rd minute strike had put them 2-1 ahead. They had fallen behind to an early Stuart Armstrong goal before Marcus Rashford equalised.

But on the day that second-placed Manchester City’s two-year ban from European football was overturned on appeal, meaning only the top four will qualify for the Champions League as usual, United’s late lapse left them fifth on 59 points.

Leicester City are fourth, ahead of United on goal difference, with Chelsea third on 60 points. City and title winners Liverpool have already secured Champions League places for next season.

Southampton took a shock lead in the 12th minute when Paul Pogba was robbed by Danny Ings just outside the area and Nathan Redmond’s cross found Armstrong at the back post where the Scottish midfielder slotted home.

Rashford then had the ball in the net, converting a low cross from Luke Shaw, but it was ruled out for offside although the United striker did not have to wait long to level.

Pogba played the ball in to Martial who held off two Saints defenders before poking the ball to Rashford and the striker made no mistake with a left-foot finish in the 20th minute.

Three minutes later United had the lead, Bruno Fernandes fed Martial on the left and the French international cut inside and smashed the ball home.

However, the home side never got a real grip on the game in midfield against a Southampton side that moved the ball well and constantly pressed.

United had to finish the game with 10 men after Brandon Williams went off injured, with manager Ole Gunnar Solskjaer having no substitute opportunities, and they failed to hold on to the three points when Obafemi turned in a poorly defended corner at the back post.

James Ward-Prowse’s in-swinger was flicked on by Jan Bednarek and Obafemi got in front of Victor Lindelof to find the decisive touch.

“The second half was a bit of a slog, we were not good enough on the ball. We brought pressure on to ourselves but we felt we did enough to win the game,” said United captain Harry Maguire.

“We have improved on defending set plays. We had a terrible record at the start of the season but have been really good on them. Can’t get let him get a header in when we have four men around the goal so have to look at it.

“We are disappointed a the moment but we dust ourselves down tomorrow,” he added.