UN: Global hunger, obesity getting worse due to virus fallout 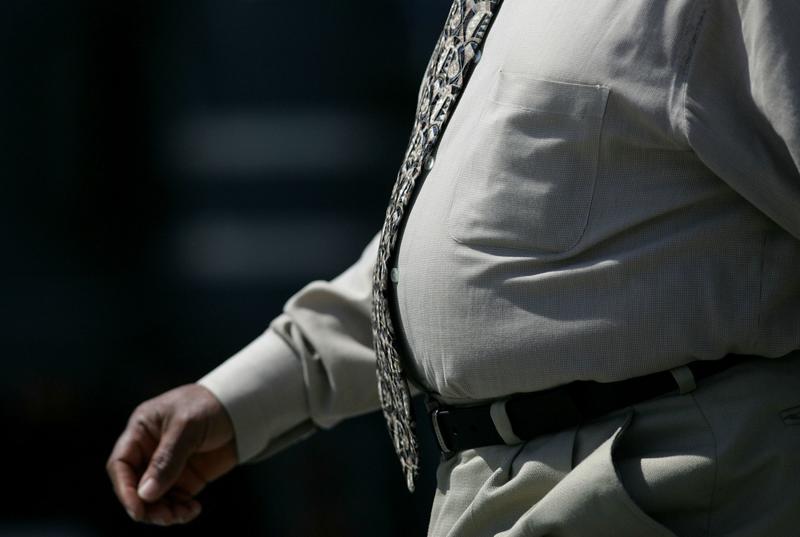 In this file photo, a man walks along the Embarcadero in San Francisco on April 6, 2005. (PHOTO / BLOOMBERG)

Hunger and malnourishment are increasing around the world as the coronavirus crisis pushes more people into poverty and limits access to healthy diets, according to the United Nations.

Most undernourished people live in Asia, though the number is growing fastest in Africa

Almost 690 million people were undernourished last year, the most since 2009, and the pandemic could tip as many as 132 million people into chronic hunger by the end of this year, the UN said in a report. At the same time, obesity has been on the rise as healthy foods remain out of reach for billions of people, a problem that will be compounded by the economic fallout from the virus.

“The pandemic is creating a problem not of food availability, but of food access, because people will have less income because of the recession,” said Maximo Torero, chief economist of the UN’s Food and Agriculture Organization, which co-authored the report. More people are shifting to cheaper, less healthy food, which could boost overweight and obesity levels, he said.

Climate change, conflict and economic downturns have exacerbated hunger in recent years, and outbreaks of crop-damaging desert locusts -- particularly in Africa -- have hurt economic prospects this year. That means the world won’t reach a target to eliminate hunger by 2030, the UN said, calling for governments to take unprecedented action to tackle the issue. 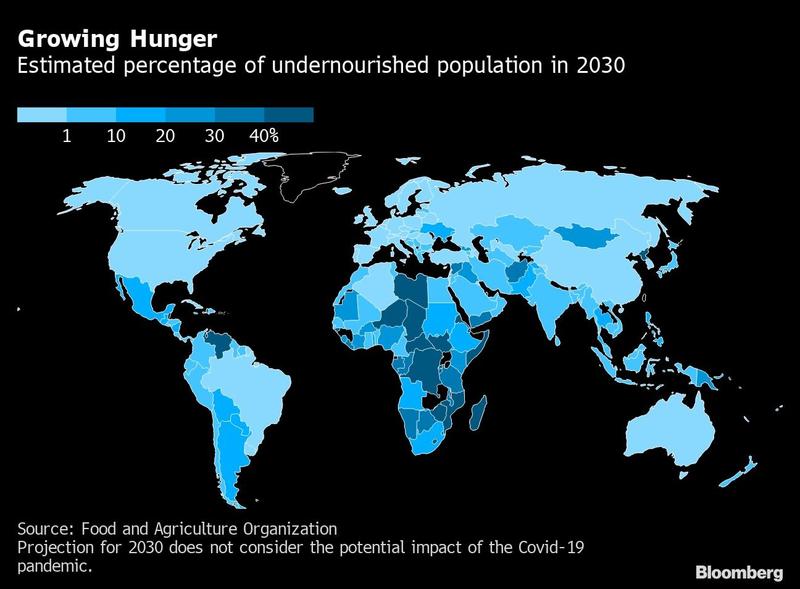 Most undernourished people live in Asia, though the number is growing fastest in Africa. If trends continue, those affected by hunger around the world will surpass 840 million by 2030, a level last seen in 2004, according to UN data.

The UN’s State of Food Security and Nutrition report was jointly produced by the FAO, the International Fund for Agricultural Development, the World Food Programme, Unicef and the World Health Organization. The agencies substantially revised down undernourished estimates after receiving more accurate data from nations including China.

While it’s too early to assess the full impact of the lockdowns and other virus-containment measures, another 83 million to 132 million may go hungry this year due to the global economic recession. 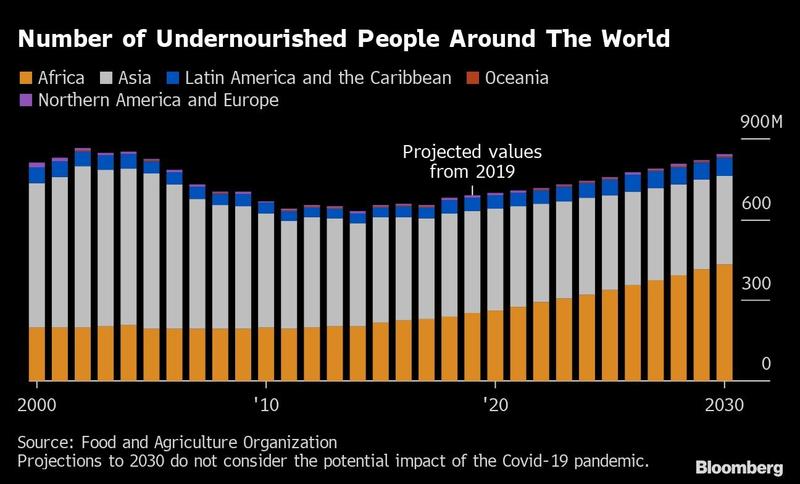 Last year, about 2 billion people lacked regular access to safe, nutritious and sufficient food, the UN said. Healthy diets rich in fruit, vegetables and protein are unaffordable to more than 3 billion people, a challenge that’s set to increase with Covid-19. Poor diets are also causing trillions of dollars in health and environmental costs.

“We need to really act quickly and help the most vulnerable populations” through measures such as social safety-net programs, food deliveries or cash transfers, Torero said. Underlying that is the need to transform how the food is produced, to enable cheaper and more accessible healthy diets, he said.