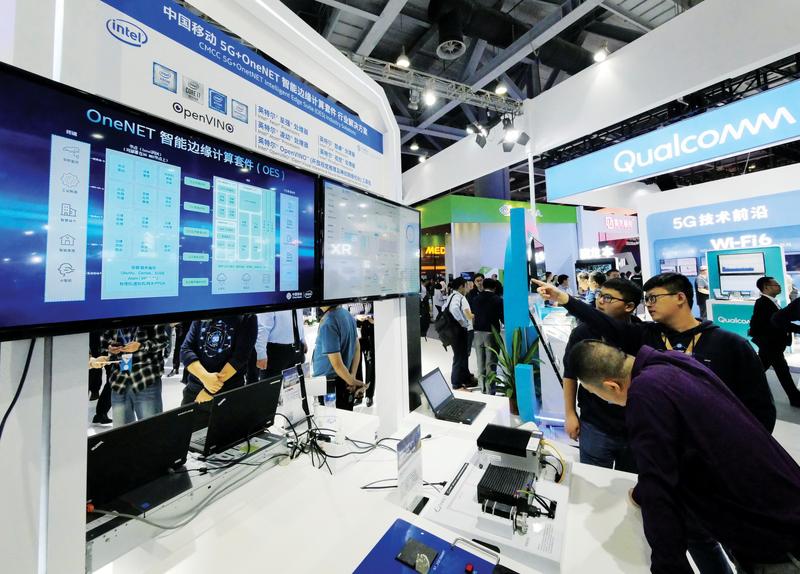 Foreign tech companies are striving to tap into China’s efforts to accelerate construction of new infrastructure including cloud computing, 5G and artificial intelligence as they continue to see robust local demand for their cutting-edge products and services.

Mark Gibbs, president of SAP China, said the new infrastructure initiative “reflects China’s long-term view and willingness to invest ahead of the curve. The influence is transcending way beyond the borders.”

“Compared with traditional infrastructure investment, the new infrastructure program has a strong technology focus. For instance, 5G will revolutionize the way business and people interconnect around the world,” Gibbs said, adding that the company will align its strategies to the initiative.

“In challenging times, technology needs to be viewed as a business enabler to improve agility and responsiveness. Successful companies of tomorrow would be the ones that have invested and will keep investing in technologies to stay agile,” Gibbs said.

His comments came after China underlined the importance of building new infrastructure as part of the nation’s broader push to boost economic growth and lay down a sound digital base for industrial upgrade.

Wu Hao, director of the Department of High-Tech Industry at the National Development and Reform Commission, said in an earlier interview that unlike traditional infrastructure such as railways, highways and airports, the new type of infrastructure projects include new infrastructure for digital transformation, intelligent upgrades and innovative development.

“Led by new development concepts, the new infrastructure is driven by technological innovation and is based on information networks to meet the needs of high-quality development,” Wu said.

Xiang Ligang, director-general of the Information Consumption Alliance, a telecom industry advocacy, said new infrastructure will bring opportunities not just for domestic companies but also for foreign tech enterprises which have long-term development plans in China.

“Intel has a steadfast, long-term strategy in China. We will travel together (with Chinese partners) and travel far,” Yang said.

He said the company’s chip plants in Dalian, Liaoning province, and Chengdu, Sichuan province, have been working nonstop amid the current virus outbreak.

“In addition to technological innovation and application innovation, industrial cooperation and industrial synergy are needed to better build the new infrastructure,” Yang added.

Alain Crozier, chairman and CEO of Microsoft China, said the COVID-19 outbreak has affected the company’s planning and strategy to a certain extent, but it still maintains confidence in the Chinese market in 2020.

The urgent demand for remote working solutions during the outbreak has caused many enterprises and organizations to take notice of Microsoft Teams, which is a key element of Microsoft 365, an integrated personal and organization productivity solution offered by Microsoft, Crozier said.

“During the outbreak, we saw so many great examples of schools continuing their classes during quarantine using technology, doctors helping patients via videoconferencing and companies continuing to operate with employees working from home in China using our technology,” Crozier added.

“Obviously, China is leading the modern workplace evolution, and it also provides a valuable reference for companies in other countries and regions fighting the pandemic,” he said.

Alain Benichou, CEO of IBM China, said the US tech giant is also seeing growing demand for its cloud computing services in the country amid the pandemic.

The outbreak is likely to be a “Darwinian moment” for the corporate world, Benichou said. Companies that take steps toward digital transformation are more likely to survive and emerge stronger after the pandemic. But those that cannot will unfortunately be left behind.

The outbreak may be the trigger for motivating more Chinese companies to outsource their IT purchasing and maintenance to third parties, so that they can better focus on their core businesses, he added.

Market research company International Data Corp predicted that by 2024, more than 70 percent of China’s IT spending budget will be used to accelerate digital transformation, higher than the global average of 51 percent.

“We see huge opportunities from the financing industry, and we are committed to bringing our financial industry-ready public cloud to China,” Benichou said, adding that IBM has built a long-term trust with Chinese banks and its data center mainframes have been at the core of China’s financial systems for decades.

Zhao Juntao, president of Swedish telecom equipment giant Ericsson’s China branch, said the COVID-19 outbreak makes it clear that “new infrastructure has never been so important than in today’s era”.

“The epidemic forced many people to stay at home for work and study. Only countries with better digital infrastructure can support such a large network demand,” Zhao said.

The 5G core network will be deployed on Ericsson’s network functions virtualization infrastructure.

He said China has long been the second-largest single market for the company and Ericsson has a huge presence in the country, including a 5 billion yuan (US$705 million) investment into the local research and development team every year.

“Ericsson has participated in China’s construction of 1G all the way to 4G networks. We aim to be an important part of the nation’s 5G innovation system. We are willing to bring our global deployment experience and know-how in cooperating with vertical industries in the market,” Zhao said.

“If you want to know how important the China market is, just look at the numbers. China already accounts for half of the global 4G wireless stations,” he added.

China has cemented its position as a global leader in 5G wireless technology, with the nation expected to account for 70 percent of global 5G connections in 2020, according to international mobile trade association GSMA.

China is also forecast to have 450 million 5G connections by 2025, the most worldwide, driven by significant operator investment and growing enthusiasm among consumers and enterprises, GSMA said.