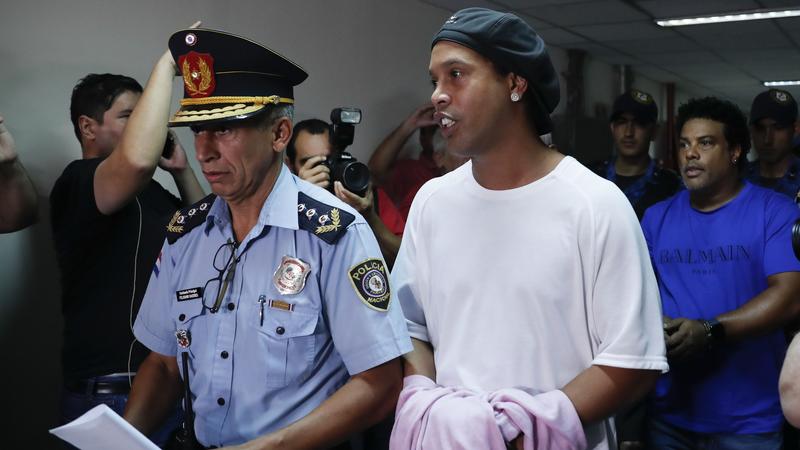 Retired football star Ronaldinho (front, right) talks as he walks as he is escorted by police at the Justice Palace in Asuncion, Paraguay, March 7, 2020. (JORGE SAENZ / AP)

ASUNCION - Ronaldinho has been ordered to remain under house arrest in Paraguay after an appeal court judge refused a request to release the former Barcelona star and his brother.

The 40-year-year-old and his older sibling Roberto Assis spent more than a month in prison for allegedly entering the South American country with fake passports.

Local media reported that the failed appeal means the brothers will be kept in preventative detention for up to six months, pending a trial

In April, the pair were relocated to the four-star Palmaroga Hotel in the capital Asuncion after agreeing to pay US$1.6 million in bail.

Local media reported that the failed appeal means the brothers will be kept in preventative detention for up to six months, pending a trial.

Ronaldinho and Assis traveled to Paraguay on March 4 to participate in a children's charity event and promote a new book. They were arrested later that day on accusations of using false travel documents.

The pair have denied any wrongdoing and said they were presented with the passports as a "gift" upon arriving in Asuncion.

Ronaldinho retired from football in 2018 after a career that included spells at Gremio, Paris Saint-Germain, Barcelona, Milan and Atletico Mineiro, among other clubs. He was a part of the Brazil team that won the 2002 World Cup and was twice voted the FIFA world player of the year.