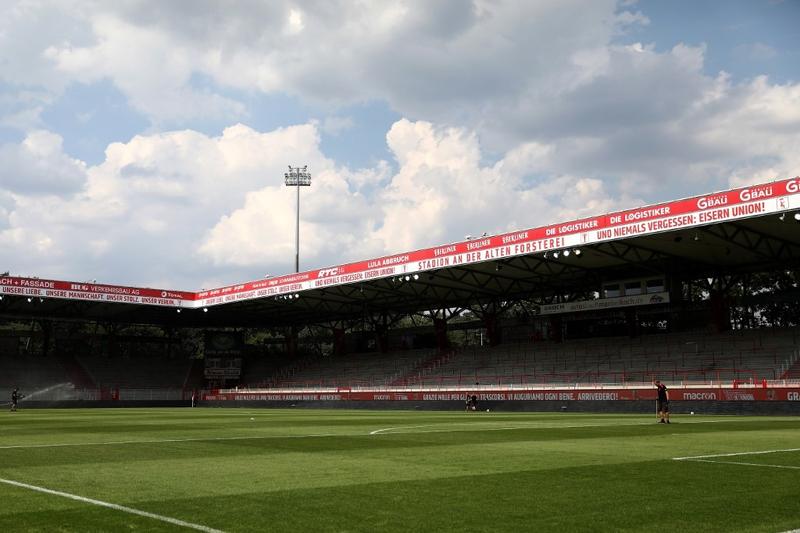 This photo shows a view of an empty Stadion An der Alten Foersterei prior to the German Bundesliga football match between FC Union Berlin and Fortuna Dusseldorf in Berlin, Germany, on June 27, 2020. (MAJA HITIJ / POOL / AFP)

BERLIN - Top-flight German soccer club Union Berlin is so keen to see its stadium filled with fans once again that it is prepared to pay for coronavirus tests for all staff and 22,012 season ticket holders so that they can safely pack the stands.

Most of the world's stadiums have been all but empty for months since the advent of the new-style coronavirus forced social distancing regulations that prevented the kinds of giant crowd gatherings that lend soccer games their ambiance.

Our stadium experience doesn't work with social distancing, and if we aren't allowed to sing and shout, then it's not Union.

Germany's top-flight Bundesliga resumed playing matches in May, but with strict distancing rules that restricted attendance to just a handful of officials, reporters and camera operators.

But Union Berlin, once the leading club of Communist East Berlin and now the arch-rival to West Berlin's Hertha, is planning drastic measures to see its Old Forestry stadium occupied once again.

"Our stadium experience doesn't work with social distancing, and if we aren't allowed to sing and shout, then it's not Union," club chair Dirk Zingler said in a statement late on Friday.

"To implement such a plan is an enormous organisational and economic challenge," the club added. "We as a football club will carry the costs of implementing the necessary measures ourselves."

Coronavirus tests cost around US$40 in April, but prices have been falling and available quantities rising as the world gets to grips with the pandemic.

By testing all staff and season ticket holders, the club could ensure that only people who are not carrying the virus come into contact with each other. Fans would have to show a ticket and a negative test result less than 24 hours old on entry.