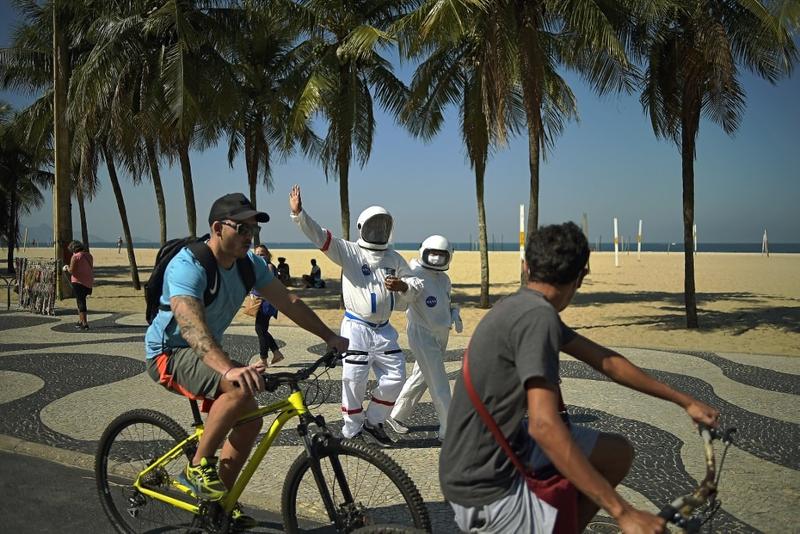 Brazilian accountant Tercio Galdino, 66, waves at passers by as he and his wife Alicea walk along Copacabana beach in protective suits, in Rio de Janeiro, Brazil on July 11, 2020. Galdino, who has a chronic lung disease, made the protective suits (which look like astronaut gear) at home using suits used by health professionals. (CARL DE SOUZA / AFP)

ZAGREB / MEXICO CITY / RIO DE JANEIRO / CAIRO / MADRID / CARACAS / MOSCOW / BUDAPEST - Brazil, the world's No.2 coronavirus hotspot after the United States, recorded another 1,071 deaths from the outbreak on Saturday, with a total of 1,839,850 confirmed cases, the Health Ministry said.

Brazil has now recorded a total of 71,469 deaths, the ministry said.

Earlier on Saturday, Michelle Bolsonaro, the wife of President Jair Bolsonaro who is sick with the new coronavirus, said on Saturday that she and her two daughters had tested negative for the virus.

The president announced that he had tested positive on Tuesday, and said he was quarantining while also taking the unproven drug hydroxychloroquine.

Michelle Bolsonaro, whose grandmother was rushed to hospital and intubated last week, made the announcement on Instagram. She has two daughters, one of whom she had with the president.

ALSO READ: WHO reports record daily spike in global cases, up over 228,000

Global COVID-19 cases topped 12.7 million while the death toll surpassed 565,000 Sunday, according to a tally by Johns Hopkins University.

The United States is the worst-hit country, with the over 3.2 million confirmed cases and 134,000 deaths.

The entire health system in Albania is on alert and facing the largest influx throughout COVID-19 epidemic, Minister of Health and Social Protection Ogerta Manastirliu said on Saturday.

"More than 4,000 services, consultations and treatments have been provided in just a few weeks in all summer health centers from Shkodra, north of the country to Saranda, southwest Albania," Manastirliu noted.

The minister called for increased vigilance in every structure and appealed to citizens to be careful, to abide by the rules in order to limit the spread of COVID-19.

On Saturday, health authorities reported a record 93 new coronavirus cases and four COVID-19 related-deaths over the last 24 hours. The total number of confirmed cases in Albania reached 3,371, with 1,881 recoveries and 89 fatalities.

The COVID-19 death toll in Algeria topped 1,000 on Saturday.

Belarus reported 163 new confirmed COVID-19 cases on Saturday, taking its total to 64,767, according to the country's Health Ministry.

There were 665 new recoveries in the past 24 hours, raising the number of recoveries to 54,919, the ministry added.

According to the Ministry of Health, 2,755 new cases and 100 more deaths were registered in the past 24 hours.

The ministry also reported that there are currently 24,034 active cases of COVID-19, and that 281,114 people have recovered from the disease.

Croatia said on Saturday that wearing face masks will be obligatory in most closed public spaces from next week as the number of COVID-19 cases keeps rising.

The number of new infections reached 140 on Saturday, the highest recorded so far in a single day. Most cases are in the capital Zagreb and in east of the country.

The national civil protection directorate said that from Monday face masks will be obligatory for both employees and clients in shops, and also for employees in bars, restaurants and other places where there is close contact with customers. The use of face masks on public transport was made compulsory several weeks ago.

Egypt confirmed on Saturday 923 new COVID-19 infections, raising the tally in the country to 81,158, said the Health Ministry.

Another 67 deaths were registered, bringing the death toll to 3,769, while 602 patients were cured and discharged from hospitals, taking the total recoveries to 23,876, the ministry's spokesman Khaled Megahed said in a statement.

Germany’s coronavirus cases rose to 199,709 while deaths increased by seven to 9,070, according to data from Johns Hopkins University, both climbing at about the same rate as the previous day.

The reproduction factor - or R value-- grew slightly to 0.93, according to the latest estimate by the Robert Koch Institute (RKI), Germany’s health body.

According to RKI data on Sunday, the number of confirmed cases increased by 248 to 198,804 while the reported death toll rose by three to 9,063.

Prostitutes demonstrated in Hamburg's red light district late on Saturday evening demanding that Germany's brothels be allowed to reopen after months of closure to curb the spread of coronavirus.

Hungary has imposed new restrictions on cross-border travel as of next Wednesday in order to prevent the spread of the coronavirus after a surge in new cases in several countries, Prime Minister Viktor Orban's chief of staff said on Sunday.

Under the new rules, Hungarian nationals returning from high risk countries listed as "yellow" and "red" will have to go through health checks at the border and will have to go into 14 days of quarantine even if they are not infected. This can only be avoided with two negative COVID-19 tests from the previous five days, Gergely Gulyas said.

The same applies to foreigners coming from "yellow" countries, but those from "red" countries will be barred from entry.

Countries in the Balkans such as Albania, Kosovo, Montenegro and neighbouring Ukraine belong to the red category, among some other states.

Serbia, Bulgaria, Portugal, Romania, Russia, Sweden, and the United Kingdom are among countries listed as "yellow", while travel from Croatia -- a popular holiday destination for Hungarians -- is free for the time being. The list will be regularly reviewed.

Transit and cargo travel, as well as business trips are exempt from the restrictions but health checks can be conducted.

Hungary, which has a population of around 10 million, had recorded 4,234 cases of COVID-19 and 595 related deaths as of Sunday. It reported five new infections on Sunday.

Italy, which has the European Union’s deadliest COVID-19 outbreak, reported 188 new cases Saturday, down from 276 the previous day and in line with the seven-day average, Health Ministry data showed.

The National Center for Disease Control of Libya on Saturday reported 47 new COVID-19 cases, bringing the total number of confirmed cases in the country to 1,389.

The death toll reached 38 and the total recoveries hit 340, the center said. 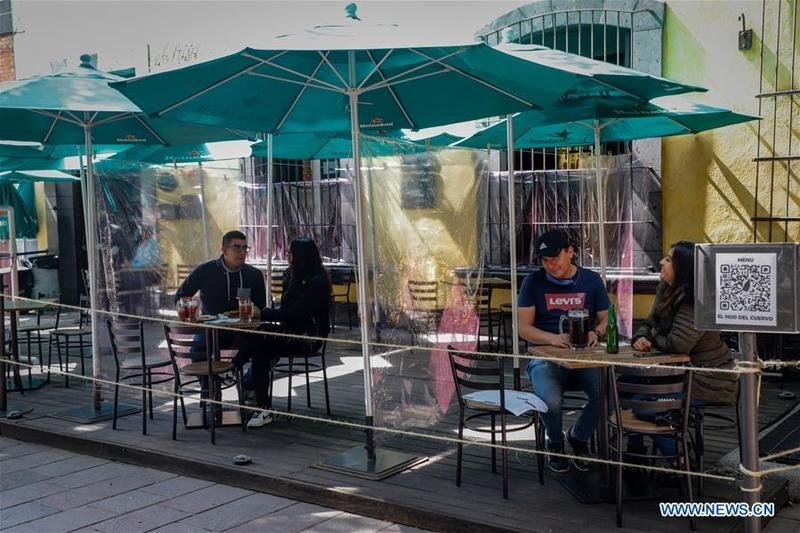 Patrons sit at an outdoor area of a diner where seats are separated by plastic sheets due to safety concerns amid the COVID-19 outbreak in Mexico City, Mexico, on July 11, 2020. (PHOTO / XINHUA)

Mexico's Health Ministry on Saturday reported 6,094 new confirmed coronavirus infections and 539 additional fatalities, bringing the total in the country to 295,268 cases and 34,730 deaths.

Morocco registered 214 new coronavirus cases on Saturday, raising the total number of infections in the North African country to 15,542, the Health Ministry said.

Recoveries rose from 238 to 12,065 while the death toll stood at 245, said Hind Ezzine, head of the department of epidemic diseases of the ministry, during a press briefing.

The country's coronavirus crisis response center said 130 people had died from COVID-19 in the past 24 hours, bringing the death toll to 11,335.

Russia said 501,061 people have recovered from the virus.

The Senegalese Ministry of Health and Social Action reported on Saturday 132 new confirmed cases of COVID-19, bring the total number of infections to 8,014 in Senegal.

South Africa may reintroduce tighter regulations on the movement of people and curb sales of alcohol as coronavirus infections soar, the Sunday Times reported.

President Cyril Ramaphosa will make an address on the new measures to help contain the virus on Sunday evening, the newspaper said. The reintroduction of curfews is being discussed.

Cases have risen an average of 5 percent a day for the past week, and the increase hasn’t been below 4 percent for almost a month. South Africa’s virus infections rose to 264,184 with almost 4,000 deaths, Health Minister Zweli Mkhize, said in a statement Saturday.

Spain's southern autonomous community of Andalusia will become the fourth region in the country to make the wearing of face masks mandatory both indoors and outdoors, regional leader Juan Manuel Moreno confirmed on Saturday.

The largest autonomous community in Spain will follow the example of Catalonia, the Balearic Islands and Extremadura in adopting the measure to curb local COVID-19 outbreaks.

Moreno said the measure would probably come into effect on Tuesday.

READ MORE: WHO's COVID-19 reviewer: 'It's going to happen again' 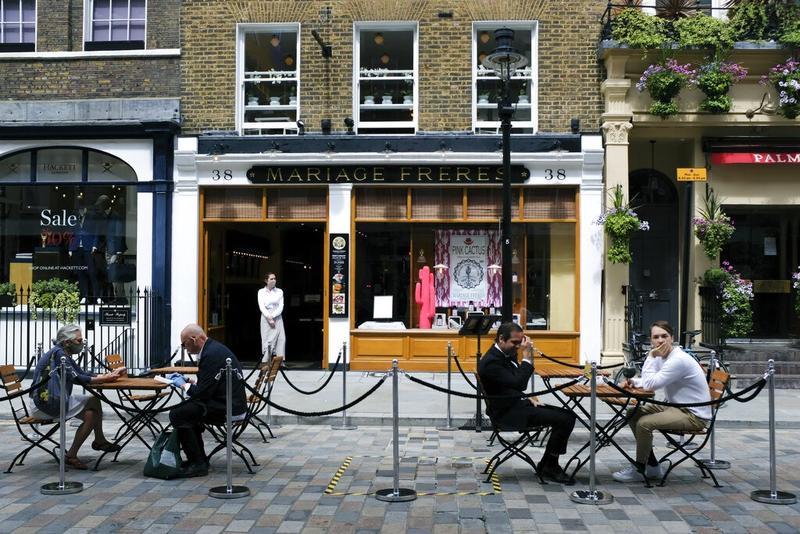 People sit at tables outside a restaurant in the Covent Garden area, in London, July 11, 2020. (ALBERTO PEZZALI / AP)

Boris Johnson is set to tell Parliament next week it will be compulsory for Britons to wear face coverings in shops, according to news reports, soon after telling the country that it was only optional do so.

The Times newspaper on Saturday cited an unidentified government official saying it was a “fair assumption” masks will become obligatory in other indoor settings within a few weeks. On Friday, the prime minister said he wanted to be “stricter” on insisting people wear coverings in confined spaces. They’re currently compulsory on public transport and in English hospitals.

New infections in the US surged by a record 71,389 from a day earlier to 3,215,861 million, jumping 2.3 percent and exceeding the daily average of 1.9 percent in the previous seven days, according to data compiled by Bloomberg and Johns Hopkins University.

The Venezuelan government on Friday prolonged the country's state of emergency for a month, the fourth time in a row, due to the COVID-19 crisis.

"In line with a decree of President Nicolas Maduro, the constitutional regime of the state of emergency is additionally prolonged for 30 days to continue the fight against the pandemic," Vice-President Delcy Rodriguez told media on Friday.

The state of emergency, declared on March 13, will run through Aug 10 in accordance with the presidential decree.

Venezuela has reported 8,803 COVID-19 cases so far, with 83 fatalities, far fewer than other Latin American neighbors like Brazil. But its cases have surged at a brisker pace recently.