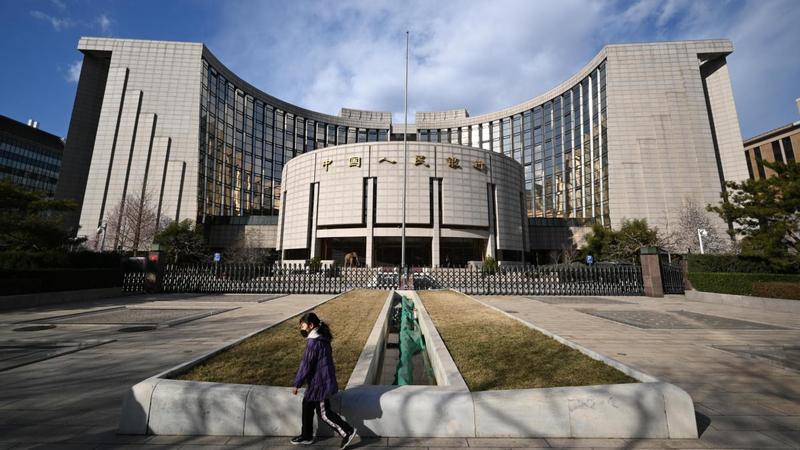 A pedestrian passes the headquarters of the People's Bank of China in Beijing. (ZHANG GANG / FOR CHINA DAILY)

China's historically high credit growth in the first half of this year has strongly supported economic recovery as the novel coronavirus epidemic has been almost controlled in the country, the central bank said on Friday. It added that monetary policy will be back to normal if the outlook remains optimistic.

Officials from the People's Bank of China, the central bank, said monetary policy will remain prudent and more flexible in the second half, providing an "appropriate" amount of money and aggregate financing, as the "crisis mode" may need to come to an end if economic indicators signal faster recovery.

In June, financial institutions offered 1.81 trillion yuan (US$259 billion) of new loans, up from 1.48 trillion yuan in May, the PBOC reported on Friday. The broad money supply, or M2, maintained a year-on-year growth rate of 11.1 percent at the end of June, unchanged from May.

Officials from the People's Bank of China said monetary policy will remain prudent and more flexible in the second half, providing an "appropriate" amount of money and aggregate financing, as the "crisis mode" may need to come to an end if economic indicators signal faster recovery

Aggregate financing－total financing to the real economy including government bonds－increased by 3.43 trillion yuan last month, compared with 3.19 trillion yuan in May, officials said.

In the first six months, China's total credit to support the real economy increased by 12.33 trillion yuan from the beginning of the year, the highest in history, which has strongly spurred the economy in coordination with the fiscal stimulus package, such as the issuance of special treasury bonds, said Ruan Jianhong, head of the PBOC's statistics and analysis department.

In the second quarter, the overall debt-to-GDP ratio, or the macro leverage level, appears to have continually risen from the first three months, as monetary policy was focusing on support for businesses and accelerated production resumption, said Ruan.

China's economy is projected to reverse the first quarter's contraction and gain more growth momentum in the April-to-June period, mainly driven by accelerated fixed-asset investment and a moderate rebound of consumer spending, according to Wang Xin, head of the PBOC's research bureau.

Guo Kai, deputy head of the PBOC Monetary Policy Department, said that as the economy is gradually recovering to a "normal" level, monetary policy should also shift to a normalized status to match the economic recovery speed.

Too much liquidity or a much lower interest rate level might lead to speculative activities and increase financial risks, Guo added.

The PBOC officials also confirmed that the rules on asset management products, which debuted in April 2018, will be postponed, probably by one more year. The rules were seen as the strictest measures ever issued by Chinese authorities to control shadow banking businesses.

Looking forward, the PBOC may squeeze in a cut in the required reserve ratio in the second half to alleviate a liquidity challenge during the issuance of special treasury bonds, according to Stephen Chiu, Asia FX and Rates Strategist, Bloomberg Intelligence. Also, it's unlikely to repeat monetary easing in large steps as happened in the first six months, he said.

"While this may be partly due to further recovery in the Chinese economy, the main reason could be the PBOC's increasing reliance on targeted monetary policy tools such as the re-lending and rediscount quotas," Chiu said.

This year, loan growth in China is expected to be dominated by corporate and inclusive finance loans, with consumer spending and credit being badly affected by the impact of the coronavirus on confidence and incomes, Fitch Ratings said recently.

The government called for large State banks to increase lending to micro and small enterprises by 40 percent in 2020. Policymakers are also looking to promote lending for "new infrastructure", such as 5G networks, as well as loans to urbanization initiatives.

The fast growth of credit may push up the leverage level in the financial system, given slower economic growth caused by the COVID pandemic, analysts said, but the rise in leverage may be temporary as financial regulators continue to put emphasis on containing financial-sector risks and boosting capitalization of more vulnerable banks.

The authorities are likely to take measures to rein in systemic and financial leverage next year, assisted by stronger economic growth, but if the leverage continues to increase significantly, it may lead to some operating risks for commercial banks, Xu added.