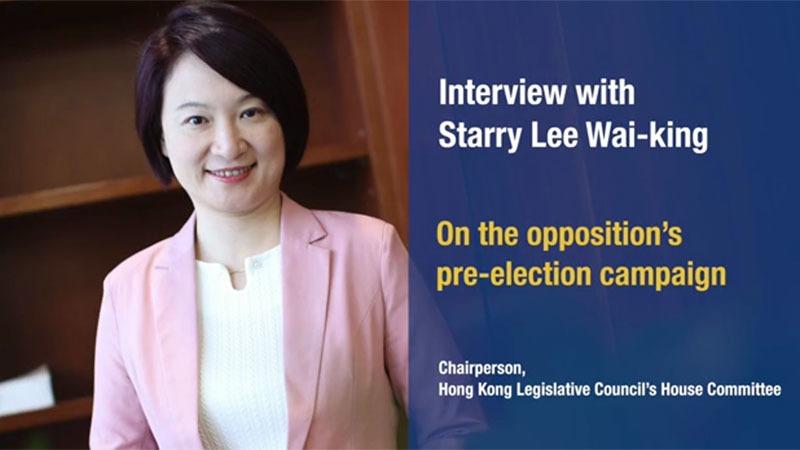 Starry Lee Wai-king, who heads Hong Kong’s biggest political party, the Democratic Alliance for Betterment and Progress of Hong Kong, has predicted a “most difficult” campaign for her party in the upcoming legislative elections, but it will be “unimaginable” for the opposition camp to capture a majority of the seats to paralyze the legislature.

She believes the newly enacted National Security Law can help restore law and order and ensure a fair election.

Recalling the sabotage of offices of many pro-establishment candidates in last year’s District Council elections, Lee hopes residents will feel safe to vote in the Sept 6 polls for candidates who strive for the well-being and development of Hong Kong, rather than those who harm and drag the city into chaos.

“The challenges the pro-establishment camp faces ahead of the elections are unprecedented,” she told China Daily.

“For our party, we now have 13 seats. It will be a luxury if we could keep the same number after last year’s district elections, but we’ll strive to win close to 13 seats.”

The DAB will announce its candidates for the polls on Tuesday after they’re endorsed by the party’s central committee.

Lee expects the opposition camp to aim for more than half of the seats in the Legislative Council, criticizing them for having threatened to block all government motions, including the Budget, so as to hold the government to ransom by forcing it to accept their unreasonable and illegal demands. The opposition camp has also threatened to sack LegCo Secretary-General Kenneth Chen Wei-on and the security officers, whom they claim are siding with the pro-establishment camp.

“It would be a very dangerous position if the government motions are blocked and the legislature is paralyzed, as the opposition camp would seize that opportunity to challenge the central and Hong Kong authorities. What would Hong Kong become then? I think this is the least Hong Kong residents would like to see. Hong Kong people must know who to vote for. It is grossly irresponsible for the opposition camp to now threaten to veto the (next year’s) Budget without even knowing the content,” she warned.

“We’ll try our utmost to maintain as many seats as possible. The authorities must take precautions against anything untoward happening in the upcoming election. In 2016, the government required the LegCo election hopefuls to sign a conformity form to declare they uphold the Basic Law and swear allegiance to the HKSAR. Yet, it was not a law, with the majority of the candidates signing it. But, some of those who did not sign were allowed to run.”

“It’s a right thing to uphold the Basic Law and swear allegiance to the HKSAR. Signing the conformity form should be made a standard requirement, and those who intend to stand in the elections must sign and submit the forms. This will prevent people from spreading extreme, separatism concepts in the legislature after being elected. For those who refuse to sign, the returning officers may have reason to doubt if they uphold the Basic Law,” said Lee.

Lee, who chairs the House Committee for the 2016-20 legislative session, said it was very unfortunate that the opposition had stagnated the committee for nearly seven months since October by filibustering the election of the committee’s chairperson for 2019-20. After she was re-elected as chairperson, the opposition continued to cause trouble at meetings. This forced many important bills to be withdrawn,  including the one on stamp duty for idle flats, while the maternity leave extension bill had been stalled until Thursday when it was passed.

Lee said the opposition lawmakers could have committed subversion under the new National Security Law if the legislation had been in force at that time.

“They should be held responsible for what they had done,” Lee said of the “pan-democrats” who boycotted the House Committee meetings after she was re-elected chairperson.