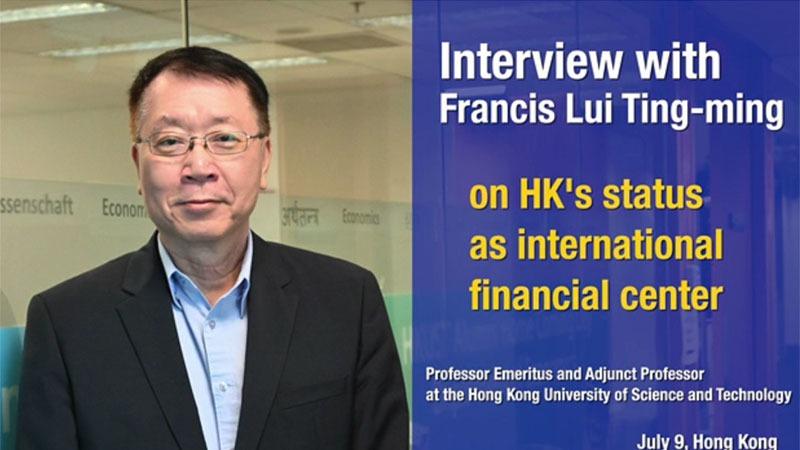 A senior Hong Kong economist is optimistic that Hong Kong will remain a global financial hub, as it will be empowered by mainland capital that has shied away from the United States’ hostile commerce environment.

The city’s status as a financial center, which is less dependent on the US, will instead be secured by a foreseeable influx of mainland businesses amid escalating Sino-US tensions, said Francis Lui Ting-ming, professor emeritus at the Hong Kong University of Science and Technology.

Speaking with China Daily on Thursday, Lui said Hong Kong likely will be caught up for a long time in the rivalry between Beijing and Washington. To maintain its advantages as a global financial center, Hong Kong must review its position now, he said.

Lui said he expects the city to grow in a way similar to New York City — as a global financial center but with its focus turned to serving domestic companies. Many Chinese mainland enterprises, threatened with disqualification or sanctions directed by the White House, are eyeing secondary listings on the Hong Kong Stock Exchange.

The (saction) threat is actually good news to Hong Kong. If Hong Kong can offer excellent services for investments in mainland enterprises, international investors will find the city more attractive

professor emeritus at the Hong Kong University of Science and Technology

The stock market in Hong Kong has rebounded in recent days, a shift that Lui believes is linked to gains by mainland enterprises listed on the Hong Kong exchange. “This shows investors are even more optimistic about China’s economic recovery from the coronavirus pandemic,” he added.

The rebound unfolded as pessimists were worrying about adverse consequences for Hong Kong’s financial market such as an exodus of companies from the city after the new National Security Law is promulgated.

“When the law was coming in, there was lots of noise. Some people predicted that Hong Kong’s stock market would go down. We have been seeing just the opposite thing happening,” he said.

The economics scholar described the strong stock market performance as an indicator that investors’ confidence is growing, while critics claim the security law will prove detrimental to Hong Kong’s economy.

“The law can help restore the city’s stability, and businesspeople love stability. We are seeing light at the end of the tunnel,” he said. He cautioned, however, that Hong Kong’s economy, battered by the coronavirus pandemic, needs still more positive factors to affect a full recovery.

It appears that the White House failed to understand that the economic relationship between Hong Kong and the US had changed, Lui said. The US lost its standing as the most important export market for Hong Kong three or four decades ago, he added.

According to the special administrative region government, local products exported to the US account for less than 0.1 percent of the annual total export value in 2019.

Media reports have said that some US government advisers once suggested the idea of striking against the Hong Kong dollar peg — perhaps by limiting the ability of Hong Kong banks to buy US dollars — but Lui said it is impossible for the White House to go so far as to resort to currency de-pegging. Even if that did happen, he said, Hong Kong has enough foreign reserves to handle such a contingency.

“Any possible sanctions by the US government on Hong Kong will be quite ineffective,” Lui said. The US cannot sanction the city without harming its own interests, he added.

“The US is eager for other countries to use US dollars as the reserve currency and as the medium of international transactions,” Lui said, referring to Washington’s policy of currency hegemony.

If the US chooses to sanction Hong Kong for political reasons, it would alarm other countries holding US dollars, he said.

“These countries would have to think twice about whether to continue to invest in US dollars,” he said. “If they were to give up some of their US dollar holdings or to shun US Treasury bonds, it would prove dangerous for the US economy.”