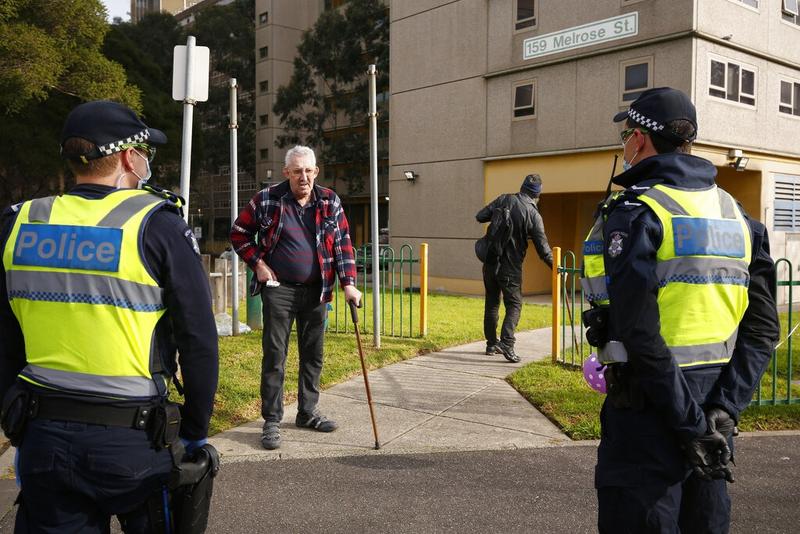 Police stand outside public housing towers that are a hotspot for COVID-19 in Melbourne Friday, July 10, 2020. (PHOTO / AP Image via AP)

BANGKOK / ANKARA / CAIRO / DUBAI / TOKYO / SYDNEY -  Australia will halve the number of citizens allowed to return home from overseas each week, Prime Minister Scott Morrison said on Friday, as authorities struggle to contain a COVID-19 outbreak in the country's second most populous city.

The state of Victoria reported 288 new cases on Friday, a record daily increase for any part of the country since the pandemic began, raising alarm bells about community transmission in a country where most cases have involved returned travellers.

"The news from Victoria remains very concerning," Morrison said. Since March, Australia has allowed only citizens and permanent residents to enter the country.

Once they arrive, they enter a mandatory 14-day quarantine in hotels, which is paid for by state governments.

Morrison said from Monday, Australia will cap the figures at 4,175 people each week, about half the number that have been returning. Those who return will also have to pay for their quarantine stays.

To ease the pain for businesses in Melbourne forced to shut again and holiday spots hit by cancellations, the state government also said it would provide a further A$534 million (US$371 million), on top of A$6 billion already provided.

Despite the latest outbreak in Melbourne, Australia has done relatively well in controlling the novel coronavirus, with around 9,000 cases and 106 deaths.

Fiji reported on Friday five new COVID-19 cases, bringing the number of active cases to eight in the island nation since July 6.

India's federal health ministry Friday morning reported 475 new deaths from COVID-19 and 26,506 new cases during the past 24 hours across the country, taking the number of deaths to 21,604 and the total infections to 793,802.

This is the highest single day spike in the number of fresh cases in the country so far.

Deaths related to COVID-19 rose by 52 on Friday, taking fatalities to 3,469, ministry official Achmad Yurianto told a televised news briefing. There are 33,529 people who have recovered.

Sima Sadat Lari, spokeswoman for Iran's Ministry of Health and Medical Education, said 212,176 patients have so far recovered from the infectious respiratory disease while 3,324 others remain in critical condition.

Falih al-Ziyadi, spokesman of the parliamentary health crisis committee, said in a statement that the committee urged the government to provide help for the health ministry and impose a two-week full curfew as "the best way" to contain the hike in infections.

The Israeli health ministry reported 1,268 new coronavirus cases on Thursday, raising the total number in the country to 34,825.

The death toll increased from 346 to 348, while the number of patients in serious condition increased from 113 to 122, out of 434 patients currently hospitalized, according to the ministry. 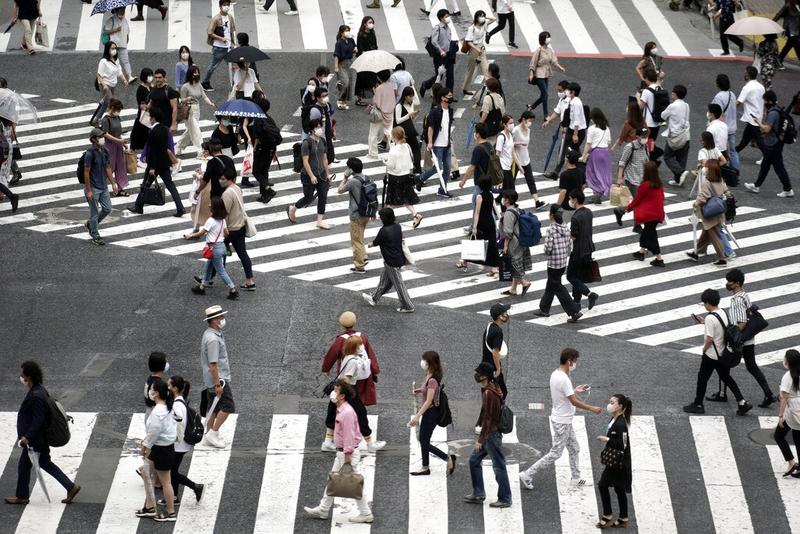 Japan is forging ahead with further steps to re-open the economy even as coronavirus cases continue to climb, with Tokyo posting a daily record of 243 new infections on Friday.

The country will begin allowing events of up to 5,000 people, including sporting events and musical concerts. Japan is also moving toward discussions with some countries on gradually lifting strict travel bans that remain in place, according to local media reports.

Japanese host and hostess clubs must act quickly to ensure they abide by rules to stop the spread of the novel coronavirus after nightlife districts became new hot spots in a resurgence of infections, the economy minister said on Friday.

Infections in the capital have been creeping up since the government lifted a state of emergency about a month ago, with the notorious Kabukicho red-light district becoming a major source of cases.

Japan has so far reported 20, 619 infections and 982 deaths, according to data compiled by John Hopkins University.

Kazakh President Kassym-Jomart Tokayev said on Friday he may sack his cabinet if its second, two-week lockdown fails to curb the coronavirus outbreak in the oil-rich Central Asian nation.

"It would raise questions about the government's ability to work in its current composition" if there is no improvement by the end of the lockdown, Tokayev's office quoted him as saying.

Kazakhstan, which imposed a new lockdown on July 5, has confirmed almost 55,000 COVID-19 infections, including 264 deaths. The number of new cases rose on Thursday to a daily record of 1,962 before declining to 1,726 on Friday.

Kuwait on Thursday reported 833 new COVID-19 cases and three more deaths, raising the tally of infections to 52,840 and the death toll to 382.

The Kuwaiti government lifted the two-month lockdown on Jleeb Al-Shuyoukh and Mahboula, the two expatriates-dominated and heavily populated areas.

The new cases were from 2,672 samples tested in the last 24 hours, said Ainura Akmatova, head of the public health care department of the country's health ministry, mentioning that the total number of infections has reached 9,358. 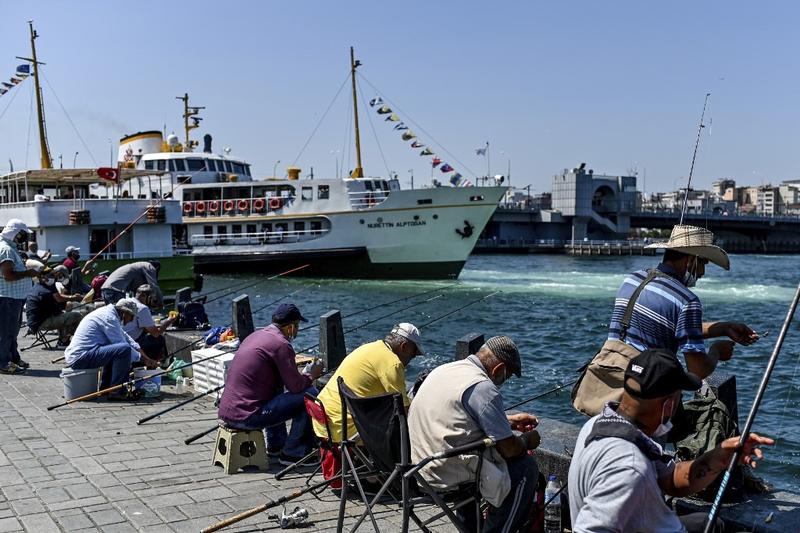 People wearing protective face masks to curb the spread of the novel coronavirus (COVID-19) fish next to the Bosphorus strait, at Eminonu district in Istanbul on July 1, 2020. (OZAN KOSE / AFP)

The Omani health ministry announced on Thursday reported 1,518 new COVID-19 cases, raising the total confirmed number in the country to 51,725.

The new cases included 450 non-Omanis, the ministry said in a statement.

New Zealand reported two new cases of COVID-19 on Friday, bringing the number of active cases of COVID-19 in the country to 23, all in managed isolation or quarantine facilities, according to the Ministry of Health.

It has been 70 days since the last case of COVID-19 was acquired locally from an unknown source, said a ministry statement.

Friday's newly reported cases brought the total number of confirmed cases to 1,192, which was the number reported to the World Health Organization, it said.

Pakistan's Ministry of National Health Services, Regulations and Coordination has rolled out guidelines for the upcoming Eid al-Adha festival to curb the spread of COVID-19, an official said on Friday.

Muhammad Salman, a public health official at the National Institute of Health, told Xinhua that the objective is to provide health guidelines to the general public, buyers and sellers of sacrificial animals regarding precautionary measures to prevent the spread of the infection during the festival.

Local authorities across the country have been advised to encourage the trend of online buying, allocate large enough spaces away from populated areas for animal markets, and strictly ensure social distancing principles.

The guidelines also include measures to ensure continued and uninterrupted prayers for Muslims on Eid al-Adha.

People must maintain social distance by keeping a 2-meter distance between each other, and every other row should be left empty to allow for 2-meter spacing in all directions, said the guidelines, adding that every person should wear a face mask and use hand sanitizers before entering and after exiting mosques.

The government has also asked the public to undertake minimal necessary travel and avoid general family get-togethers during the festival.

Palestine on Thursday recorded three new COVID-19 deaths in the West Bank, raising the death toll to 27 since March 5.

The Palestinian Ministry of Health said in an emailed press statement that the three victims included a woman and two elderly men.

It also reported 262 new cases of COVID-19 infection, raising the tally of confirmed cases to 5,829 in the Palestinian territories.

Saudi Arabia, the hardest-hit Arab country, registered on Thursday 3,183 new COVID-19 cases, bringing the total cases in the kingdom to 223,327.

The total number of recoveries rose to 161,096 in the kingdom, where the death toll soared to 2,100 with the registration of 41 new fatalities.

Singapore's Ministry of Health (MOH) reported 125 new COVID-19 cases on Thursday, bringing the total confirmed cases in the country to 45,423.

Of the new cases, one is imported, 21 are community cases and the rest are linked with the dormitories of foreign workers.

The daily caseload moved between 40 and 70 for the past 10 days amid the continued small cluster infections and imported cases.

One more death was confirmed, leaving the death toll at 288. The total fatality rate stood at 2.16 percent.

The number of COVID-19 patients in Sri Lanka surpassed 2,100 on Thursday after 57 new patients tested positive for the virus, the government information department said in a statement.

According to the statement, the new patients included 56 inmates from a drug rehabilitation center in Kandakadu in north central Sri Lanka while one was a female instructor at the center who was on leave and residing in Marawila, in the north western province.

The first coronavirus case was confirmed in northwest Syria on Thursday, aid workers said, raising fears for a region where hospitals lie in ruins and camps overflow with people after nearly a decade of war.

Doctors have worried for months about the pandemic reaching the northwest, Syria's last big rebel bastion, where an army offensive uprooted around a million people earlier this year. The person infected is a physician at Bab al-Hawa hospital near the Turkish border, said a report from the Assistance Coordination Unit (ACU), a group which delivers aid and belongs to the Syrian opposition. 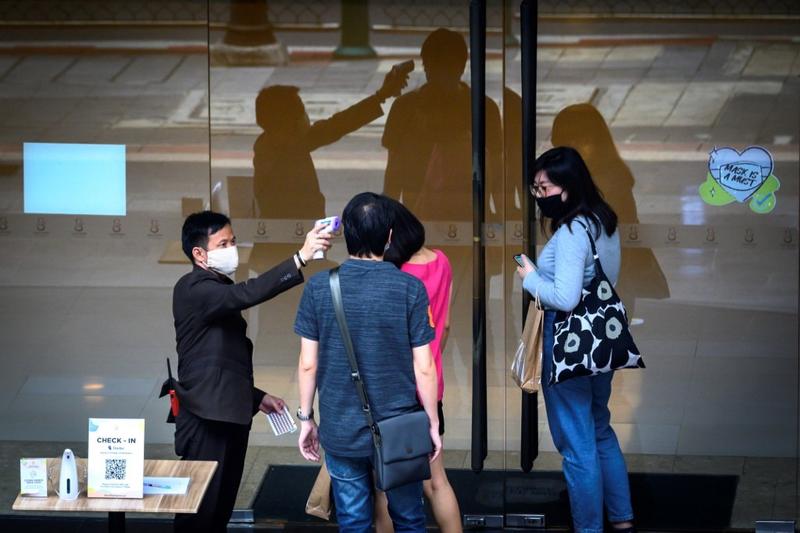 A shopping center security guard takes the temperature of visitors as a preventive measure against the spread of the novel coronavirus in Bangkok on July 8, 2020. (PHOTO / AFP)

Thailand's Ministry of Foreign Affairs on Thursday issued an advisory to inbound travelers including Thais and foreigners, on the steps to take before being granted the permission to enter Thailand.

"There have been lots of confusion from travelers about necessary steps to take before entering Thailand, therefore we have come up with this advisory," said Natapanu Nopakun, deputy director general of the Ministry's Information Department.

The entry to Thailand is not open to general tourists, but opened to Thai returnees, foreigners with Thai spouses or with work permit and business travelers, among others.

Natapanu said that those wanting to fly into Thailand need to contact the Thai Embassy to book a seat on a repatriation flight.

Foreigners must book a room at an alternative state quarantine site, get a fit-to-fly health certificate as well as a COVID-19 test that is negative and has been taken no more than 72 hours before departure. Foreigners are also required to have insurance coverage specifically for COVID-19. Thais, on the other hand, only need to provide a fit-to-fly certificate.

Upon arrival at a Thai airport, foreigners will need to undergo health screening before they are transported to the alternative state quarantine site.

The country has largely contained the virus so far with a total of 3,202 confirmed cases and 58 deaths.

In a bulletin, the ministry said total deaths had increased to 1,360, while confirmed cases had reached 52,914.

Turkey and the WHO signed an agreement on Thursday to open a WHO office in Istanbul for dealing with humanitarian and health emergencies, while jointly fighting the coronavirus pandemic in the region.

"We expect WHO to become a more proactive structure in the new period, especially in emergencies," Turkish Health Minister Fahrettin Koca said at a press conference with WHO Regional Director for Europe Hans Henri Kluge.

The United Arab Emirates (UAE) on Thursday announced 532 new COVID-19 cases, bringing the total confirmed cases in the country to 53,577.

UAE's Ministry of Health and Prevention said 1,288 more patients recovered from the virus, taking the tally of recoveries to 43,570, while the death toll rose by one to 328.

The total number of COVID-19 cases in Yemen's government-controlled provinces increased to 1,356 on Thursday, as 38 new cases were confirmed.

The Yemeni Health Ministry said in a brief press statement that during the past 24 hours, the number of recoveries in the government-controlled areas increased to 619 since the outbreak of the novel coronavirus on April 10.