This handout photo taken and released on July 10, 2020 by Singapore's Ministry of Communications and Information shows the city-state's Prime Minister Lee Hsien Loong (centre) waving as he cast his vote at Alexandra Primary School during the general election in Singapore. Wearing masks and gloves and being careful to observe social distancing, Singaporeans voted in a general election on July 10 as the city-state struggles to recover from the coronavirus outbreak. (HANDOUT / SINGAPORE MINISTRY OF COMMUNICATIONS AND INFORMATION / AFP)

SINGAPORE - Singapore headed to the polls Friday as Prime Minister Lee Hsien Loong’s ruling party seeks to extend its 55-year rule with a fresh mandate to counter the city-state’s worst-ever recession amid the coronavirus pandemic.

With about 96 percent of registered Singaporeans casting their ballots as of 8 pm, the Elections Department announced more than 2.5 million votes have been cast so far in Singapore’s general elections. That’s higher than 2015, when about 2.3 million people cast votes.

All eyes are on how the ruling People’s Action Party will perform this time around, compared to the 69.9 percent of votes it got in 2015.

The People's Action Party (PAP), in power since independence in 1965, is expected by analysts to carry Prime Minister Lee Hsien Loong to another comfortable, and probably final, victory

Voting is mandatory in the affluent city-state, but many fretted about the risks as they lined up in masks for as long as an hour to cast their ballots, with jobs at the top of their agenda as the pandemic threatens to cause Singapore's worst-ever recession.

The People's Action Party (PAP), in power since independence in 1965, is expected by analysts to carry Prime Minister Lee Hsien Loong to another comfortable, and probably final, victory.

Lee, the 68-year-old son of Singapore's founding leader Lee Kuan Yew, has been premier since 2004. He has already flagged his intention to step down in the next few years, but first wants a fresh mandate to overcome the coronavirus crisis.

As he queued to vote, a video widely shared on social media showed his wife tapping him on the shoulder to remind him to keep his distance when he strayed too close to the person in front.

Voters wearing face masks wait to enter a school, temporarily used as a polling station, to cast their ballots during the general election in Singapore on July 10, 2020. (ROSLAN RAHMAN / AFP)

The delays convinced the election authority to drop a requirement for voters to wear gloves, and by evening it had extended voting by two hours to 10 pm.

Since a coronavirus lockdown eased in June after two months, the number of new daily cases has crept back into double figures, excluding the migrant workers living in dormitories where infection rates have been far higher.

"This is a very dangerous time to hold an election, even though many precautions were taken," Mayank Goel, 21, a biomedical engineering student, said after voting.

Social distancing rules constrained campaigning, and no party rallies were allowed, but opposition parties and rights groups still warned that holding the election now could distract from government efforts to tackle the virus.

Singapore has one of the lowest COVID-19 fatality rates in the world and initially earned widespread praise for its efforts. But subsequent mass outbreaks in cramped migrant worker dormitories persuaded the government to keep schools and businesses closed for longer. 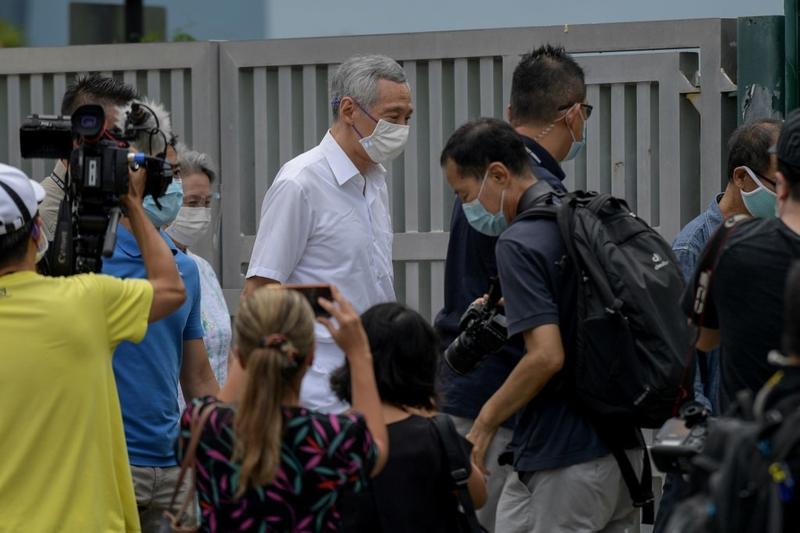 The poll is widely seen as a test of views on the government's response to the crisis and the next generation of leaders, and the results will be closely watched as even small shifts in the PAP's popularity can lead to major policy changes.

When concerns around immigration and jobs flared in 2011, the PAP polled a record-low 60 percent. It subsequently tightened international hiring rules to address those concerns - which have now come to the fore again.

Organisers had hoped for fast, hygienic voting to minimise risks. Voters were given a recommended time slot and, inside the polling stations, they had to self-scan identity cards and sanitise their hands before receiving a ballot paper.

Sample counts are expected soon after polling closes with final results due in the early hours of Saturday.