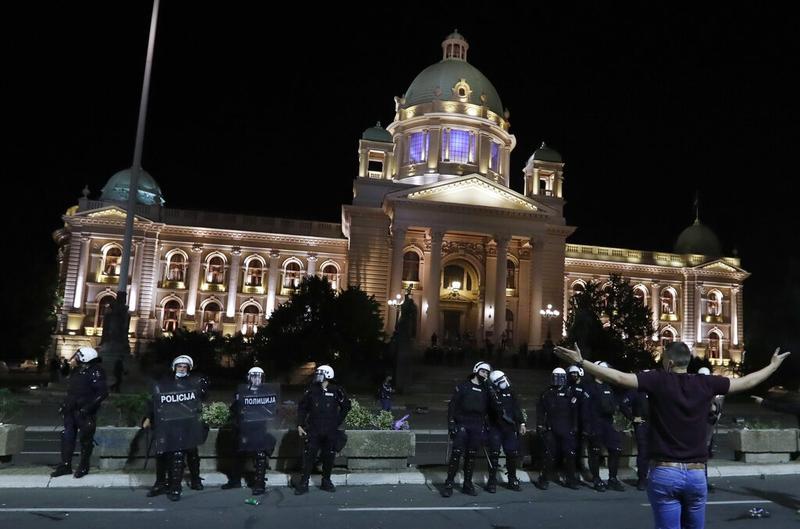 BELGRADE - Dozens of demonstrators and police were injured in overnight rioting in Belgrade, triggered when a crowd stormed Serbia's parliament in protest at plans to reimpose a lockdown following a surge in coronavirus cases.

Footage showed police kicking and beating people with truncheons while protesters pelted officers with stones and bottles, after thousands chanting for the resignation of President Aleksandar Vucic gathered outside the building.

Police director Vladimir Rebic said on Wednesday that 43 police and 17 protesters were injured and 23 protesters had been arrested.

"A handful of hooligans will not succeed," he said overnight in a live broadcast on state-run RTS TV after the crowd was dispersed.

Vucic announced the new lockdown on Tuesday, saying it was needed because of the rising number of coronavirus cases. It is due to run over the coming weekend and will cover Belgrade and possibly also other areas.

The government says a lack of sanitary discipline among the population is the reason for the rise in cases.

The government's critics say the government's decisions to allow soccer matches, religious festivities, parties, and private gatherings to resume, and parliamentary elections to go ahead on June 21, are to blame for the spike in infections. They say people should not have to pay the price for another lockdown.

The crowd demanded Vucic's resignation and shouted: "Serbia has risen."

Riot police used tear gas to repel rock-throwing, mostly right-wing demonstrators who briefly broke into the parliament building in central Belgrade in the biggest outbreak of violence against Vucic since he came to power in 2014. 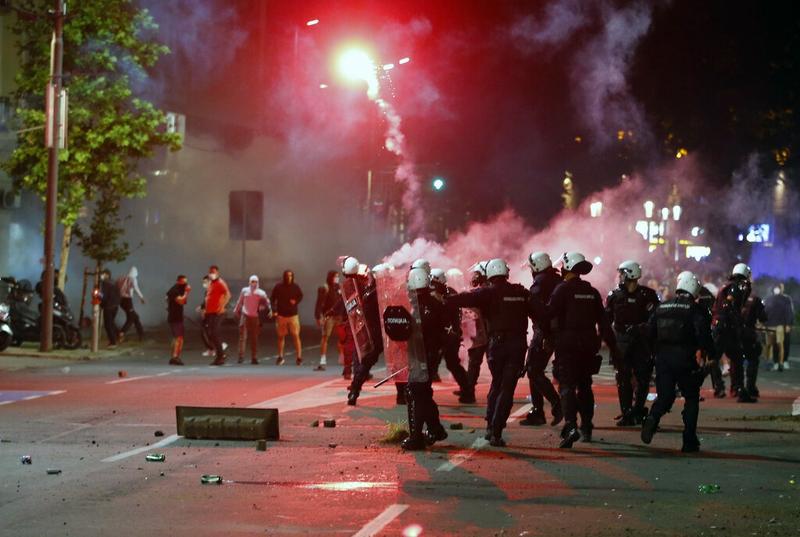 "People gathered spontaneously. Discontent can be felt in the air," Radomir Lazovic of the Do Not Let Belgrade Drown opposition group told N1 television.

A crowd of about 5,000 smashed several shop windows and set five police cars on fire, while smaller groups rallied peacefully in the biggest northern city of Novi Sad and in the central city of Kragujevac. The government, led by Vucic’s dominant Serbian Progressive Party (SNS), denounced the violence.

“The state and all its institutions will preserve and protect our constitutional order,” Prime Minister Ana Brnabic said late Tuesday. She condemned opposition politicians “behind the violent charge into Serbia’s parliament at the moment when the state and the health system are facing the biggest onslaught of coronavirus since the pandemic began”.

Aside from opposing the plan for the new lockdown, the protesters chanted “We don’t want migrants” and “Kosovo is the heart of Serbia,” the latter of which underscores the Balkan state’s dispute with its neighbor, which declared independence a decade after the two sides fought a war.

Serbia, a country of 7 million people, has reported 16,168 coronavirus infections and 330 deaths. But the numbers are spiking and 299 cases and 13 deaths were reported just on Tuesday.

Epidemiologists and doctors warned that hospitals were running at full capacity and that medical workers were tired. 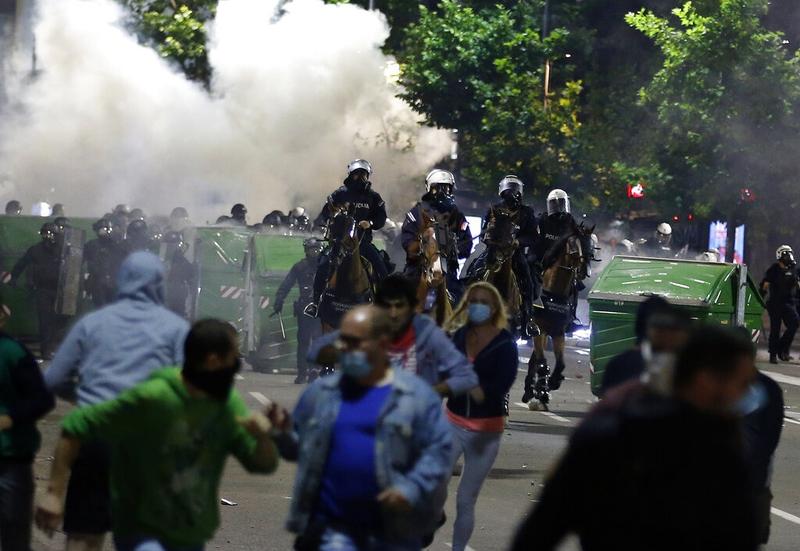 In early March, Serbia introduced a lockdown to halt the spread of the coronavirus.

But in late May, the Balkan country was among the first to open up and set elections for June 21. During the campaign, the ruling SNS organized rallies at which people did not wear masks.

Top party officials, including the president's adviser, were infected after celebrating their election victory in a small room while not wearing masks.

Opposition parties, many of which boycotted the election, criticized Vucic for using the lockdowns to strengthen what they call his autocratic rule.