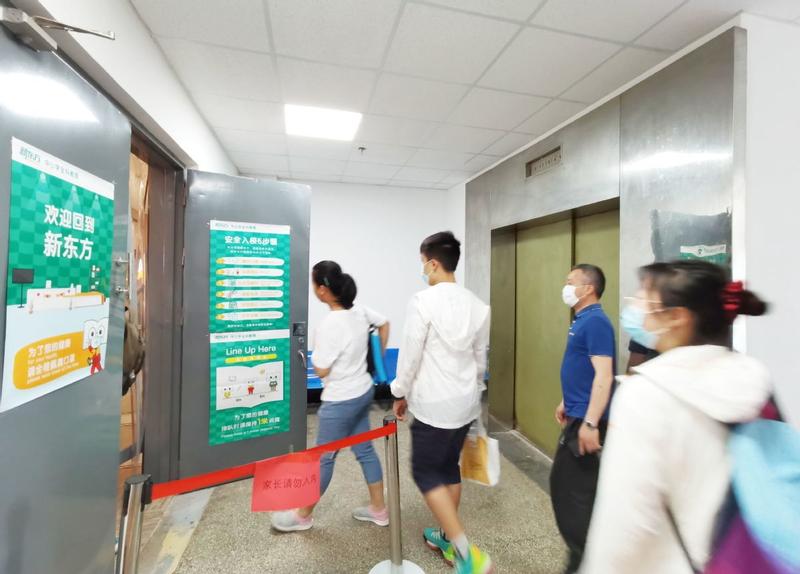 Since she received offers from two universities in the United Kingdom in January, Ma Shuyuan's mood has been like a roller coaster, swinging from excitement and happiness to anxiety and worry.

The global COVID-19 pandemic has affected policies in destination countries for international students, including thousands from China, whose plans to study overseas have been disrupted by the outbreak.

Ma, a senior student in communications at the Capital University of Economics and Business in Beijing, has decided to take a gap year before enrolling at graduate school in the UK, one of the most popular destinations for Chinese students. She has spent two years preparing to study in the country because she loves British culture.

Having applied in September, the 22-year-old received conditional offers from King's College London and the University of Leeds. She decided to go to KCL, which asked her to submit the grades from her last semester and her scores from the International English Language Testing System.

"At first, I was worried that no universities would make offers, as a friend had already received some. I was happy when I got my offers, but then the pandemic broke out and I started to worry about whether I could go to the UK on time and safely," Ma said.

Students applying for universities overseas need to meet various requirements, including specific grade-point averages, good grades in IELTS or the Test of English as a Foreign Language, and other factors such as extracurricular activities.

Initially, Ma's visa application and registration for the IELTS exam were affected by epidemic prevention and control measures, because people had been advised to avoid large gatherings. 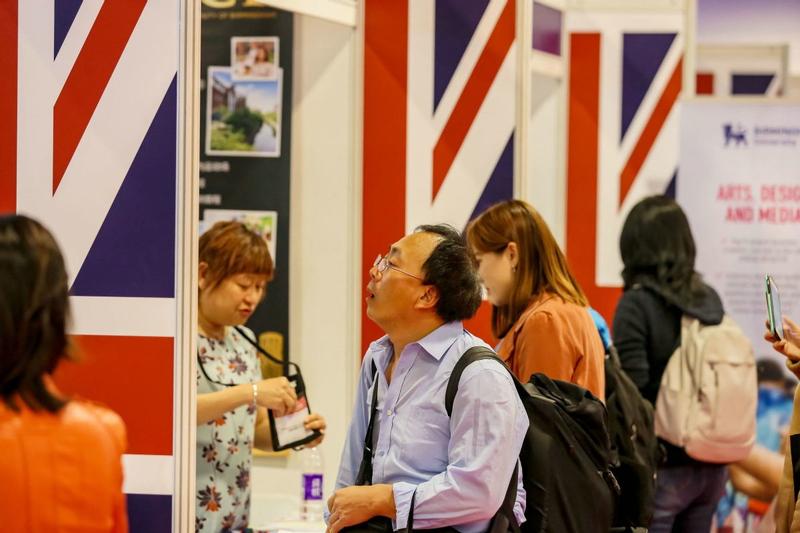 A parent reads notices about British universities at an education expo in Beijing last year. (A JING / FOR CHINA DAILY)

Then, the tests for IELTS and TOEFL, along with the Graduate Record Examination and the Graduate Management Admissions Test, were canceled on the Chinese mainland in February, the National Education Examinations Authority said.

Because the exam cancelations were reviewed on a monthly basis, Ma attempted to register for the IELTS test four times from February to May.

She had planned to take language classes at KCL, so she would have to pay extra fees before joining her graduate course. The deadline to register for the class was early last month, but as she hadn't received her visa she didn't make it.

She finished her dissertation defense in late May, and her grades for the last semester and bachelor's degree were scheduled to be released last month.

However, the discovery of some new cases of COVID-19 in Beijing delayed the process, so she did not receive her grades until early this month.

Her graduation certificate will be mailed to her in the coming weeks, and her application to KCL, asking to postpone her course for one year, will be dealt with sometime after July 15.

Ma's friends who have also received offers from schools overseas are waiting to see if the epidemic may ease in the second half of the year. Once underway, they want to finish their studies as quickly as possible, often by taking online courses, and find jobs.

"I have no plans to take online courses, as I want to experience British culture in person. My favorite band－Queen－the Sherlock Holmes novels and TV series and Harry Potter are all there. The cultural factor played an important role when I decided to study in the country," Ma said. 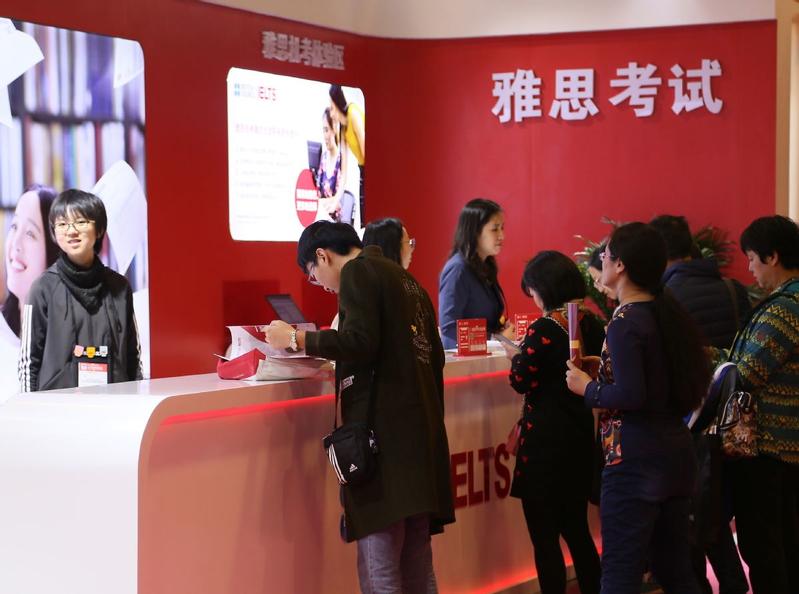 Students and their parents line up to consult staff members at the information booth of the International English Language Testing System during an exhibition in October. (NAN SHAN / FOR CHINA DAILY)

She wants to find a job or internship during her gap year, but her lack of work experience has frustrated her plans. Despite sending her resume to more than 10 companies, she has received no replies.

"The epidemic has affected the overall market and many companies are in a downturn. I want to find internships related to e-commerce, but the companies all want to recruit full-time employees. I must find something to do; otherwise, I may waste the year," she said.

Ma said that students like her who planned to study abroad paid great attention to improving their GPA and scores in the IELTS or TOEFL exams during their undergraduate days.

As a result, they missed many internship opportunities as they were less competitive than graduates who didn't plan to study abroad and had more work experience.

"I had considered finding a job after finishing my graduate studies in a year or so, but I have to find a job now," she said.

According to the Ministry of Education, the number of new university graduates nationwide will reach 8.74 million this year, a rise of 400,000 from last year, and solving the employment problem has been high on the government's agenda.

Kang Xinrui, a senior student at Beijing University of Posts and Telecommunications, has received six offers from universities in the United States.

The 22-year-old wants to study at New York University, but she is planning to take a break of six months or a year in the hope the pandemic situation in the US will improve.

She said visa application interviews at the US embassy in Beijing are fully booked until December, so she has no chance of arriving in the country in late August in time to complete the enrollment process.

Instead, she is looking for an internship or a full-time job related to software development－the subject she will study in the US－but like Ma she has not received replies from her preferred companies. 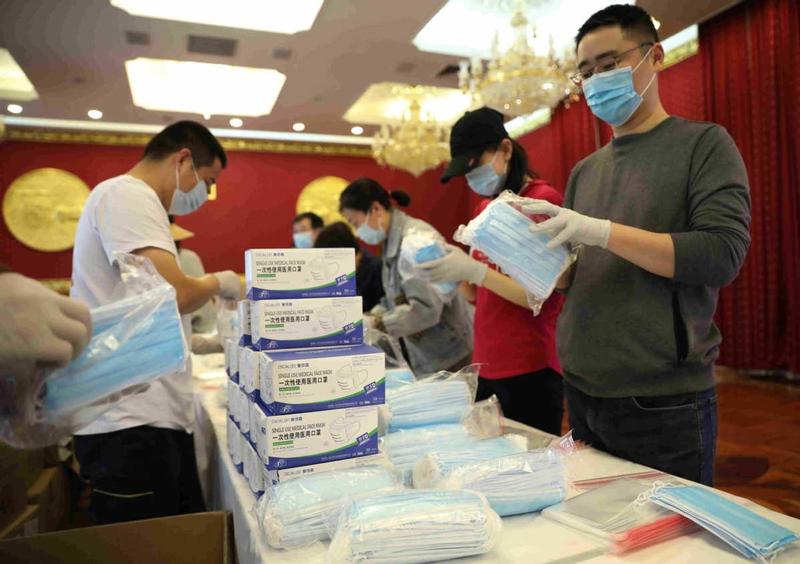 She had the opportunity to be recommended for graduate studies at Beijing University of Posts and Telecommunications without taking any more exams. She turned the offer down, though, because her father encouraged her to study in the US.

"I am a little regretful about giving up that opportunity. My mother would prefer me to stay in China－she said that if I accepted the recommendation (in Beijing) I wouldn't have to experience so much uncertainty," she said.

Many students admire those who study abroad, while some of those heading overseas admire people who can finish their graduate studies in China. Kang is now searching for online materials to study software development on her own.

Shi Xiaoguang, a professor with the Graduate School of Education at Peking University in Beijing, said the COVID-19 pandemic will have a short-term impact on people planning to study overseas, while the long-term effect will depend on when things return to normal.

He said the overseas study sector will recover gradually, noting that the 2003 outbreak of severe acute respiratory syndrome also affected the industry but it rebounded.

"In the past decade, the number of people studying abroad, especially in developed English-speaking countries, has risen rapidly as people sought better education resources worldwide. Although higher education has developed rapidly in China, there is still a gap with developed Western countries," he said.

While the policy and social environments in destination countries have a significant influence on international student numbers, a welcoming attitude from the government and locals will encourage students to travel, Shi said.

Students who want to study abroad need to weigh their input against the output. They need to practice their language skills and obtain related professional knowledge while the epidemic lasts, and also try to find a job in China so they can gain work and social experience, he added.

"They need to face the changes brought by the COVID-19 outbreak bravely and make full preparations for the future, rather than being held back by the pandemic. In China, the outbreak is gradually being contained, so the students have many opportunities to enrich their lives and display their talents," he said.

He said the pandemic will force many parents to think twice about sending their children to study abroad or selecting educational or training institutions because the fees are a huge expense for many families. As a result, many such institutions are likely to face tough times.

Hu's company has moved all of its teaching online for the duration of the pandemic. He said that only those institutions that had made adequate preparations and introduced innovative developments during the outbreak would attract students.

For the first time, all primary and middle school students are taking classes online, which will help to accustom both them and their parents to changes in traditional learning methods, he said.

"Following the epidemic, both online and online-offline mixed education will be widely accepted. Some parents said their children did not warm to online classes at first, but they gradually adapted, and once they take classes online they will continue to use the new system. So, I think the pandemic has brought both an opportunity and a challenge," he said.

Hu's company is facing a 10 percent decline in the number of new students due to the pandemic, so it is boosting marketing efforts to offset the impact. However, he thinks the pandemic's effect will be limited in his sector because it will not narrow the gap between education standards in China and developed countries, or stop Chinese people from seeking good education resources.

"The demand for high-quality education resources will not change. The whole sector will recover quickly after the pandemic. Most parents will be able to deal rationally with the negative impact and make timely adjustments for their child. Also, less than 10 percent of students may drop their plans to study overseas," Hu said.

He added that many potential students are facing difficulties this year, such as delayed application procedures and slow distribution of student visas. Also, many countries have taken measures to reduce the number of international flights to curb the risk of importing the virus, which has sent ticket prices soaring.

He suggested that students should remain calm and pay attention to notices released by universities and local governments.

"For those who failed to prepare properly, postponing their plans may offer an opportunity to gain more professional experience and improve their language skills. Parents can also let their child gain a bachelor's degree in China before pursuing a master's abroad," he said.

In terms of the culture shocks that have emerged as a result of the pandemic, Hu said no matter which country students travel to, they will experience the impact of different cultural concepts, which is also a form of education.

"Compared with the pressures faced by the first group of overseas students after the reform and opening-up policy started (in the late 1970s), today's students may face less pressure. I think today's students should be more confident because they have a strong motherland behind them," he said.