Esteemed Chinese chef Chen Xiaohe of 10 Shanghai in Causeway Bay, selected in the 100 Top Chinese Restaurants in the World, shares the secrets of his recipe for sautéed mud crab with brown sauce, edamame and glutinous rick cakes.

Executive chef Chen Xiaohe of 10 Shanghai has devoted himself to cooking for more than 20 years and developed an expertise in Chinese cuisine. He has worked for a variety of renowned restaurants and government organisations, including the Fairmont Peace Hotel, Oriental City Hotel and Empire City Huaiyang, and was the director of Shanghai & Huaiyang cuisine for the Super Star Group in Shanghai. Chef Chen also worked for the Chinese People’s Armed Police Force in Beijing from 2002 to 2011, where he was responsible for preparing Huaiyang feasts for directorate officers.

Here, Chen shares his inspiration and his recipe for sautéed mud crab with brown sauce, edamame and glutinous rice cakes.

When did you create this recipe?

I created it in 1999 when I worked at the Fairmont Peace Hotel in Shanghai. Rice cakes are popular in Shanghai, while Jiangsu [north of Shanghai] is famous for seafood like mud crab. I came up with the idea of cooking crab and rice cake together when I was chatting with a colleague. I imagined that the rice cakes would absorb the essence of the crab and that it might bring the rice cakes to another level. So we gave it a try and found it tasted nice.

Later, I recommended this dish to my customers and they loved it.

Where do you source the ingredients from? 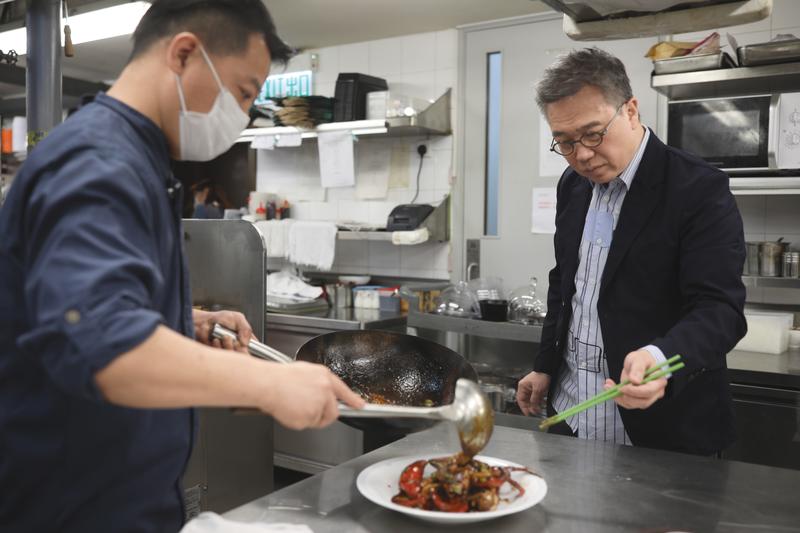 Why is Yangzhou known as such a hotspot for outstanding chefs?

There’s a long history for this phenomenon in terms of Yangzhou’s unique geography and culture. Starting in the Shang Dynasty, Huaiyang cuisine developed quickly, especially during the Qing Dynasty, and became famous among the various Chinese cuisines. For a long time, Yangzhou has had an established food culture. Its famous dishes include Yangzhou fried rice, braised pork balls in brown sauce, braised pork knuckle and more.

In the Qing Dynasty, the Qianlong Emperor [who ruled from 1735 to 1796] took seven trips to Jiangnan [a region that combines today’s Nanjing, Ningbo, Hangzhou, Yangzhou and more]. When the emperor went to Yangzhou, he discovered that the cuisine there was very delicious and he liked it very much. Yangzhou people wanted to please the emperor’s stomach so they could make a living, and competition among chefs became fiercer and fiercer. Hence, people were motivated to meticulously develop even more traditional dishes.

Today, Yangzhou cuisine is usually served at state banquets. Premier Zhou Enlai was born in Huai’an, so he loved Huaiyang cuisine. Interestingly, it’s said that Yangzhou is famous for three knives: the chef’s knife, the pedicure knife and the haircut knife.

Is there a philosophy behind this dish?

There is a symbolism for this dish, too. Mud crab will turn red when fully cooked and in Chinese, “red” corresponds with fire, symbolising good fortune and joy. Rice cakes have an identical sound to 年, meaning “year” in Chinese. As such, eating this dish has the symbolism of bringing good fortune every year. Therefore, people normally order it at weddings, Chinese New Year or other celebrations.

Wash the mud crab thoroughly and chop it into pieces. Slice the ginger and glutinous rice cakes. Cut the scallions into 5cm-long pieces. Remove the skin from the edamame beans.

Heat some oil to around 200˚C in a wok. Dust the crab with flour before adding it in. Fry until golden brown and set aside.

Reduce the amount of oil, then add in the ginger and scallions and fry until fragrant. Add the crab back into the wok and pour in the Shaoxing wine.