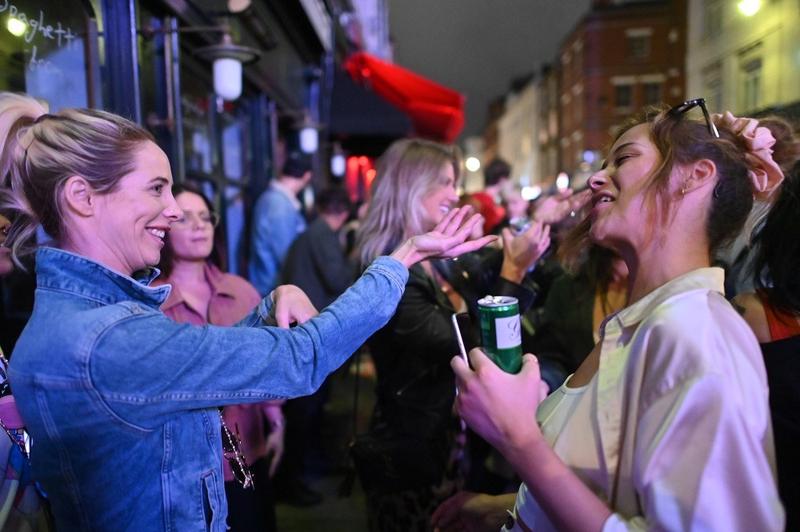 Revellers dance to the song Macarena outside bars in the Soho area of London on Saturday, as restrictions are eased further amid the novel coronavirus pandemic. (JUSTIN TALLIS / AFP)

Britain's Health Secretary Matt Hancock claimed pub-goers in England appear to have "acted responsibly" as drinking establishments reopened on Saturday, despite concerns from police that social distancing guidance was not adhered to in some areas.

Thousands flocked to pubs, restaurants and bars around England as large parts of the hospitality sector reopened for the first time since March.

But the chief of the Police Federation of England and Wales has said it was impossible to enforce distancing rules on drunk people. In a social media post, John Apter said: "What was crystal clear is that drunk people can't/won't socially distance."

He said that in Southampton, where he had been on shift, he had seen "naked men, possession of class A drugs, happy drunks, angry drunks, fights (and) more angry drunks".

The rule changes apply only to England as the devolved nations in the United Kingdom have set their own timetables for easing restrictions, with Wales and Scotland waiting until next week. Northern Ireland reopened hospitality on Friday

The rule changes apply only to England as the devolved nations in the United Kingdom have set their own timetables for easing restrictions, with Wales and Scotland waiting until next week. Northern Ireland reopened hospitality on Friday.

Hancock has said the vast majority of people who went out on Saturday were "doing the right thing" and following social distancing, despite the contradictory reports from the police.

"I think that from what I've seen, although there's some pictures to the contrary, very, very largely people have acted responsibly," Hancock told Sky News.

Pictures showed crowding in the streets outside pubs and bars in London's Soho and in Newcastle and Leeds. Some pubs in Nottinghamshire decided to close after alcohol-related anti-social behavior.

Hancock also said he is concerned about poor social distancing in clothing factories in the Midlands city of Leicester as some were confirmed as having outbreaks. Leicester has also had to remain in a local lockdown, after a surge in infections.

'Not to overdo it'

British Prime Minister Boris Johnson addressed the nation on Friday about the easing of the lockdown, telling people "not to overdo it".

Some had criticized the government for lifting the lockdown while the number of daily COVID-19 deaths was still relatively high compared to other countries in Europe.

The UK's COVID-19 death toll increased on Sunday by 22, taking the total to 44,220, according to the latest government figures. Overall, 285,416 cases have been confirmed.

Elsewhere, Portugal's foreign affairs minister said his country's exclusion from a list of countries for which quarantine will not apply for people returning to England is "absurd".

So-called air bridges, or travel corridors, which come into effect on Friday, allow people returning from certain countries to England, to avoid 14 days of self-isolation.

Almost 60 countries are on the list including popular travel destinations such as Greece, Spain and Australia. But Portugal has been left off the list alongside the United States, China, the Maldives and Sweden.

Augusto Santos Silva told the BBC: "We are very disappointed with the decision of the British authorities. We think it is senseless and unfair.

"It is quite absurd the UK has seven times more cases of COVID-19 than Portugal so we think this is not the way in which allies and friends are treated."