By ​Andrew Cohen in New York 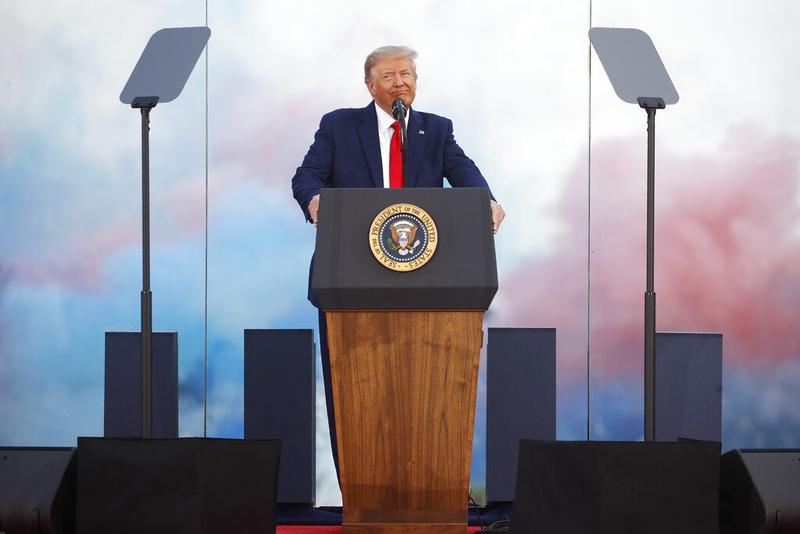 US President Donald Trump speaks during a "Salute to America" event on the South Lawn of the White House, in Washington, July 4, 2020. (PATRICK SEMANSKY / AP)

With COVID-19 cases rising across the United States, US President Donald Trump is downplaying the threat of the coronavirus even as a top Trump administration health official on Sunday cast doubt on the safety of holding the Republican National Convention, or RNC, in Jacksonville, Florida, next month.

Florida reported 9,999 new infections on Sunday afternoon, taking the state's total number of cases to 200,111, according to the Florida Department of Health website.

Florida reported eight new deaths on Sunday; some 3,731 people have died of COVID-19 in the state so far.

The Republican Party moved most of the Republican National Convention's activities to Jacksonville from Charlotte, North Carolina, last month after a battle over coronavirus safety concerns with that state's Democratic governor. However, record numbers of people have been testing positive for the virus in Jacksonville

Speaking on CNN, US Food and Drug Administration Commissioner Stephen Hahn refused to confirm Trump's claim on Saturday that "99 percent" of cases were "totally harmless", calling the COVID-19 situation a "serious problem".

With record numbers of people testing positive for the virus in Jacksonville and across Florida, Hahn was asked if it would be safe to hold the typically large political gathering in just seven weeks.

"I think it's too early to tell," Hahn told CNN. "We will have to see how this unfolds in Florida and elsewhere around the country."

Hahn, a member of the White House Coronavirus Task Force, was asked to comment on his boss' statement made during the Fourth of July speech at the White House.

"I'm not going to get into who is right and who is wrong," he said. "It's a serious problem that we have. We have seen the surge in cases. We must do something to stem the tide."

The Republican Party moved most of the RNC's activities to Jacksonville from Charlotte, North Carolina, last month after a battle over coronavirus safety concerns with that state's Democratic governor.

Trump enjoys seeing large crowds at his rallies, but he has not embraced masks or social distancing measures at campaign events held since the country began reopening from the coronavirus shutdown. On Wednesday he endorsed mask wearing despite resisting wearing one himself in public.

READ MORE: Trump says US schools must reopen in fall amid pandemic

Coronavirus cases rose in 39 states, casting a shadow over the nation's Independence Day celebrations. Ahead of the Fourth of July weekend, public health experts warned that holiday parties could cause further spikes in infections that could overwhelm hospitals.

In the first four days of July alone, 15 states have reported record increases in new cases. There are more than 2.8 million cases with at least 129,900 deaths, according to a Johns Hopkins University tally.

Florida's cases have risen by over 10,000 for three of the past four days. Cases are also soaring in Arizona, California and Texas and trending upward in Midwestern states that once had infections declining, such as Iowa, Ohio and Michigan, according to a Reuters analysis.

She said the city was in a "crisis related to testing", with people waiting in eight-hour lines in their cars to find out if they were infected.

Reuters contributed to this article.