Temperature anomalies in the Siberian Arctic, compared to the 1981-2010 average. (GRAPHIC / AFP)

GENEVA/MOSCOW - Temperatures in Arctic Siberia soared to a record average for June, more than 5 degrees Celsius (9°F) above normal, in a heat wave that is stoking some of the worst wildfires the region has ever known, European Union data showed on Tuesday.

Average temperatures in the region were more than a degree higher than in June in the last two years, which previously held the records as the two warmest Junes ever.

The World Meteorological Organization is also seeking to confirm whether a record Russian reading of more than 100°F (38°C) in Siberia, is also the highest temperature ever recorded north of the Arctic Circle.

“The climate is changing faster in the Arctic and we are getting drier and warmer conditions which are ideal conditions for wildfires to burn,” Mark Parrington, senior scientist at Copernicus, told Reuters, referring to some of the worst wildfires in living memory that have intensified since June.

The Russian forestry agency said that, as of July 6, there were 246 forest fires covering 140,073 hectares and an emergency situation has been declared in seven regions. Russian state TV footage this week showed planes dumping water near huge columns of white smoke.

Copernicus says the fires have surpassed the record number of blazes seen in the region in the same month of last year. 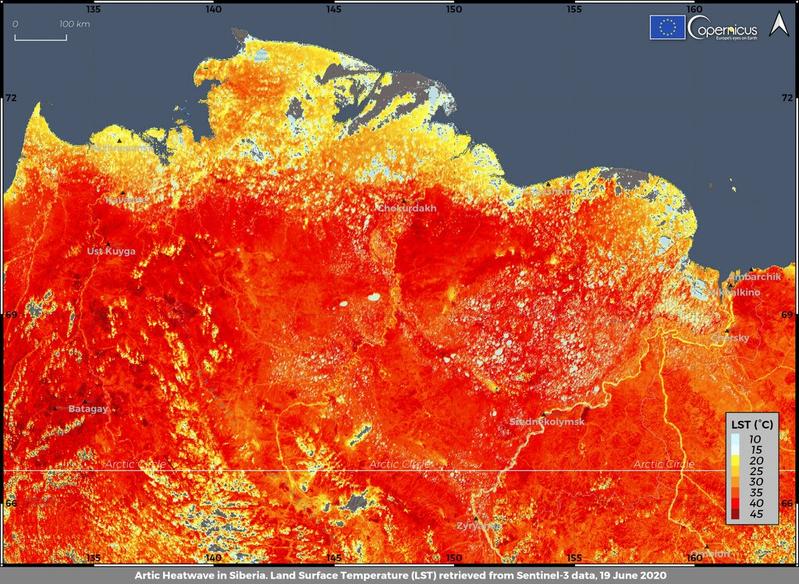 This photo taken on June 19, 2020 and provided by ECMWF Copernicus Climate Change Service shows the land surface temperature in the Siberia region of Russia. A record-breaking temperature of 38 degrees Celsius was registered in the Arctic town of Verkhoyansk on June 20 in a prolonged heatwave that has alarmed scientists around the world. (ECMWF COPERNICUS CLIMATE CHANGE SERVICE VIA AP)

In 2019, the worst year on record for regional fires, the Russian forest agency said wildfires ripped through around 15 million hectares with damage at more than 13 billion roubles (US$181.5 million).

However, that may be even be an underestimate as the satellite data the Copernicus relies on is not thought to include all peat land, which tends to smoulder, not burn.

Scientists say the wildfires are contributing to climate change via feedback loops: burning peatlands are releasing carbon stored there for millenia and leaving soot deposits on snow and ice, reducing their ability to reflect the sun’s heat.

“The big link that people need to make - it’s far away and it’s sparsely populated but it still has a big impact on everybody,” Guido Grosse, at the Alfred Wegener Institute Helmholtz Centre for Polar and Marine Research said.

In total, last year, wildfires in the Arctic Circle produced more than 170 megatonnes of emissions, exceeding the 2018 annual emissions of many countries such as Algeria.