Frogs help villagers hop out of poverty in Jiangsu

Editor's Note: A xiaokang society, or a moderately prosperous society, has been the dream of Chinese people for thousands of years. Our reporters travel around the country to cover the arduous efforts being made in order to realize the dream. 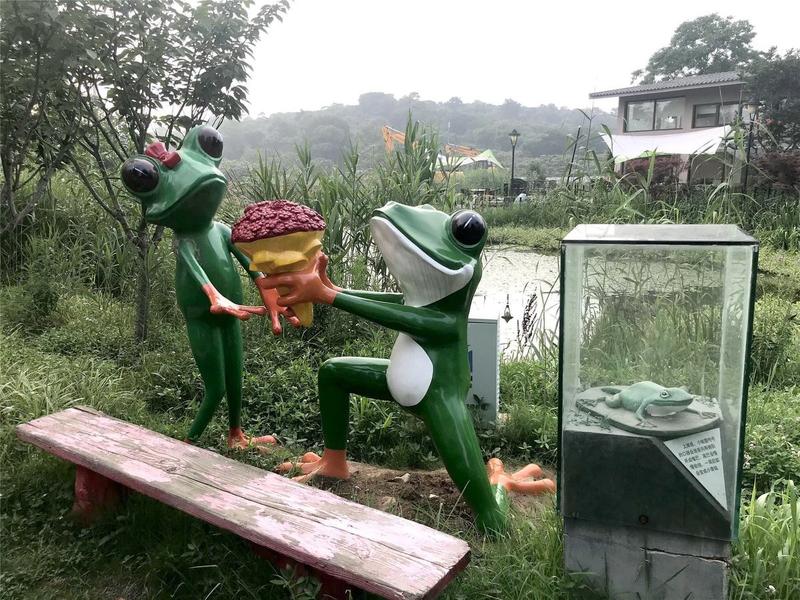 Farmer Zhang Maoxing used to frown at the unsold fruits, vegetables and tea that piled up in his yard in Xixiang village, in Suzhou, Jiangsu province. The village had few visitors, so there weren't many people buying his produce.

To sell his goods, he had to travel outside the remote village. It used to take the 62-year-old 90 minutes to climb two hills to reach the center of Dongshan township from his home. When it rained, the dirt roads in the village became so waterlogged that the villagers had to wear rubber boots to wade through mud pits.

Things began to change in 2014, when the village and Dongshan township invited an environmental protection expert from Taiwan to help the locals find a way out of poverty.

The 61 types of frogs found in Xixiang village, including some very rare ones, completely changed the villagers' way of life

Ultimately, it was the 61 types of frogs found in the village, including some very rare ones, that completely changed the villagers' way of life.

"I witnessed how the environment was improved gradually," Zhang said. "Many of the villagers could not believe what we saw. It's like we moved to a completely different village."

In Xixiang, now known as "frog village", visitors can learn about frogs at a museum, hear the amphibians croak in the quiet night and have coffee at a cafe on a frog pond. Frog elements can be noticed almost everywhere in the village.

By running a hotel and selling tea, loquats and bayberries, Zhang's family made more than 350,000 yuan in 2019. His children, who had left home to become migrant workers in other cities, have returned home to help him run the hotel and grow fruit.

Like his children, many young people have returned to the village, which was previously mainly home to older adults and children. Many of them work in the hotels, tea plantations and paddies.

"More clubs, bookstores and cafes will be opening in the near future," said Xu Ji, a member of the village committee. "Tourists may also appreciate the fireflies, watch light shows and buy agricultural products."

The village is one of many in Jiangsu province that have made the most of their advantages to make a better life. For example, in the Ganyu district of Lianyungang, many fishermen have become millionaires by selling seafood through livestreaming. And in Shuyang, in Suqian, many farmers have made a fortune by selling plants online.

Wang Guangming, a farmer in the Guzhuang community in Rugao, a county-level city in Nantong, now earns about 1.5 million yuan to 2 million yuan a year growing bonsai trees.

He said a bonsai pine tree that is about the height of an adult can sell for more than 100,000 yuan. He lives in a villa with a garden full of the bonsai trees he grows.

In Rugao, about 100,000 farmers work in the bonsai industry, which also provides jobs for more than 200,000 farmers in other parts of China. A worker experienced in growing bonsai trees can earn 2,000 to 3,000 yuan a day during peak seasons.

Chen Ninghua, deputy manager of the city's Flowers and Trees World Holding Co, said that apart from large, expensive bonsai trees, the company has also developed miniature bonsai trees, which are about the size of an adult's hand.

"The city will finish constructing a high-end horticulture market by December," she said. "It will contain an exhibition center that shows customers how bonsai trees can improve their living environment in gardens, bedrooms and living rooms."