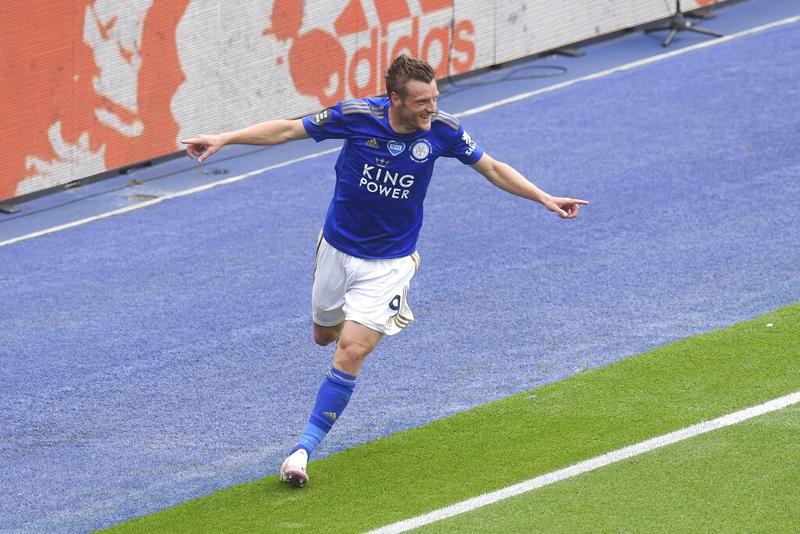 LONDON/MANCHESTER/NORWICH - Jamie Vardy netted his 100th Premier League goal as Leicester City notched their first victory since the league resumed, beating Crystal Palace 3-0 on Saturday to keep up their drive for Champions League football next season.

Leicester swarmed all over Palace from the first whistle as defender James Justin hit the crossbar early on, but it took until the fourth minute of the second half for Kelechi Iheanacho to finally put his side ahead with a close-range effort.

Despite the return of striker Christian Benteke, visitors Palace struggled to create much in front of goal, with their best efforts coming from set pieces. Any chances they did manage were easily dealt with by goalkeeper Kasper Schmeichel.

Vardy cut a frustrated figure as he sought to become the 29th player to score a century in the English top flight, getting the ball caught under his feet and snatching at some decent opportunities as he chased the milestone.

Having slammed the ground in frustration at another missed chance moments earlier, Vardy made no mistake when Harvey Barnes set him up for a tap-in in the 77th minute. The 33-year-old striker looked relieved as he celebrated in an empty King Power Stadium. 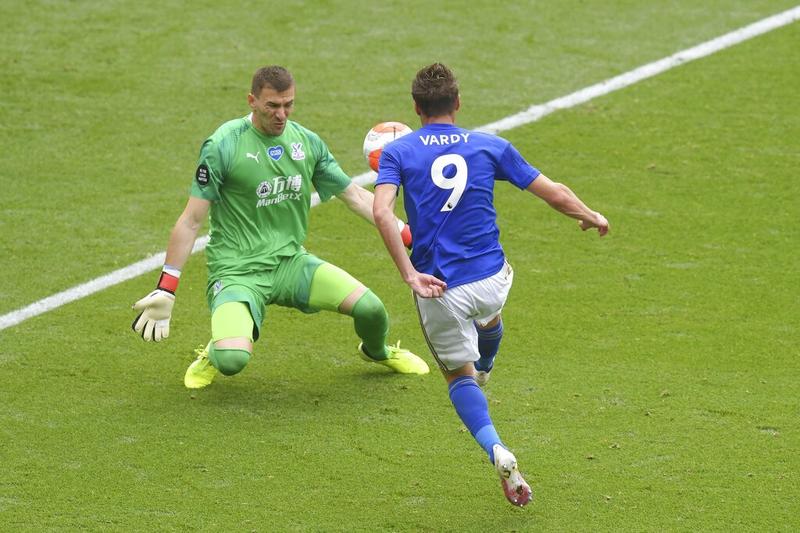 Leicester continued to concede corners and free kicks in dangerous positions, but all too often the ball flew harmlessly over the massed ranks in the penalty area on a disappointing afternoon for Palace.

Vardy added a superb solo second in stoppage time to make it 3-0, breaking from the halfway line before calmly slotting the ball past Vicente Guaita.

“I will wait until the end of the season when I can reflect on things, we have a game in three days,” Vardy told the BBC when asked about his century, and he added that the afternoon had been something of an emotional rollercoaster.

“I’m always frustrated if I miss a chance, you want to score as many as possible, but to get the two goals and the three points is all you can ask for,” he said.

The result means that Leicester remain third in the table, eight points behind Manchester City with five games remaining. The Foxes are three points ahead of Manchester United and four ahead of Chelsea, while Crystal Palace are 13th on 42 points.

READ MORE: Klopp: Being 20 points ahead of Man City was unthinkable 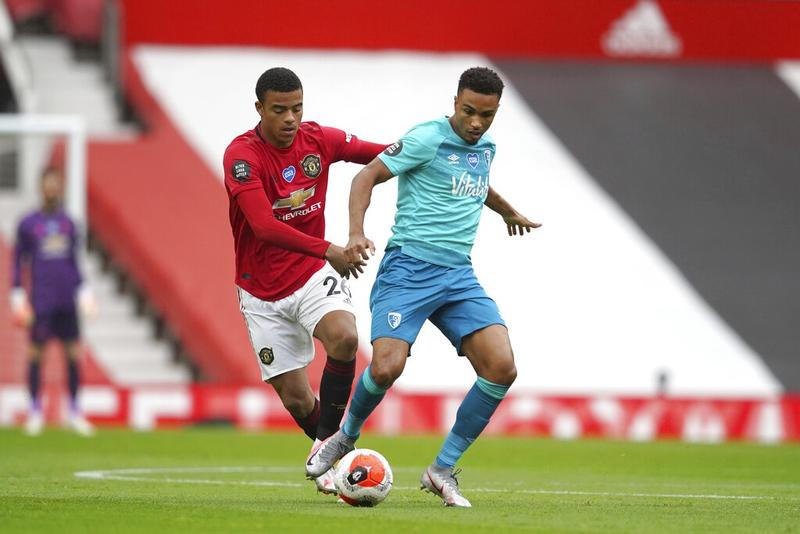 Manchester United’s three-pronged attack combined to devastating effect as they crushed Bournemouth 5-2 in the Premier League on Saturday to move into the top four and stretch their unbeaten run to 16 games in all competitions.

Mason Greenwood shone with two superb goals while Anthony Martial, Marcus Rashford and playmaker Bruno Fernandes added one each for United, who climbed into fourth place on 55 points from 33 games.

Junior Stanislas fired the visitors into a 16th-minute lead but United hit back through Greenwood before Rashford converted a penalty and Martial rifled a screamer into the top corner to give the home side a 3-1 halftime lead.

Josh King pulled one back for the visitors with a penalty shortly after the break but United came storming back again as Greenwood made it 4-2 with another clinical finish and Fernandes curled in a free kick on the hour.

Bournemouth, who have now lost 17 of their last 22 league games, stayed 19th on 27 points and face a mountain to climb if they are to avoid relegation from the top flight. 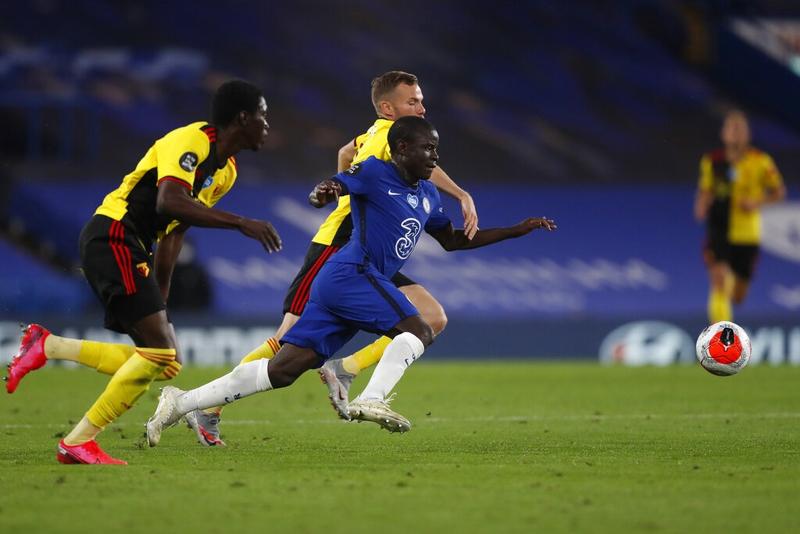 Chelsea's N'Golo Kante, center, vies for the ball during the English Premier League soccer match between Chelsea and Watford at the Stamford Bridge stadium in London, July 4, 2020. (MATTHEW CHILDS / POOL VIA AP)

Giroud, Willian and Barkley fire Chelsea to victory over Watford

First-half goals from Olivier Giroud and Willian and a late strike from Ross Barkley earned Chelsea a 3-0 Premier League victory over struggling Watford on Saturday and a boost to their ambitions for Champions League football next season.

France striker Giroud hit the target in the 28th minute, after a brisk move between Barkley and Mason Mount, with a low left foot shot that bounced in off the post.

Brazil’s Willian sent goalkeeper Ben Foster the wrong way from the spot two minutes before halftime, after American winger Christian Pulisic, racing down the left, had drawn a clumsy foul from Etienne Capoue.

Barkley added a third in stoppage time, after being set up by captain Cesar Azpilicueta, following a flowing move between Ruben Loftus-Cheek and the ever-busy Pulisic.

It was a vital win for Chelsea, who lost to lowly West Ham United in midweek, as it returned them to fourth place after Manchester United had stolen the coveted spot for a few hours by beating Bournemouth 5-2. 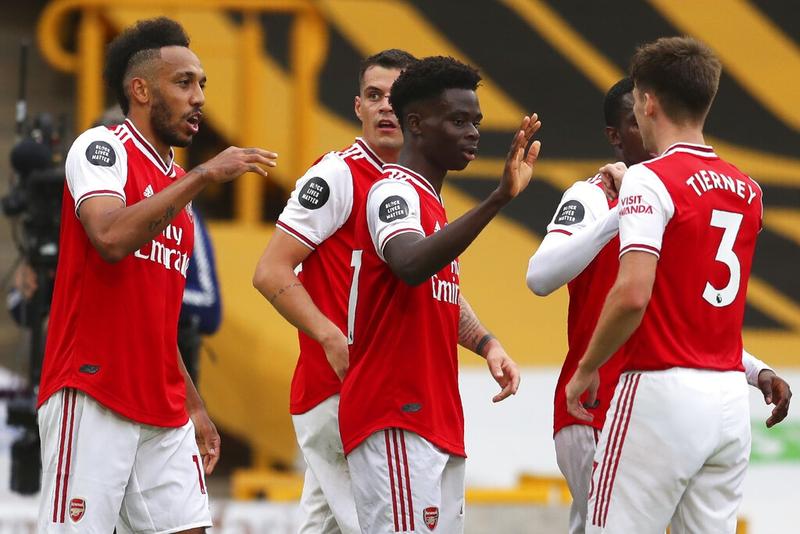 Arsenal put a dent in Wolverhampton Wanderers’ hopes of a top-four finish as Bukayo Saka’s first Premier League goal helped them to an impressive 2-0 away victory on Saturday.

The 18-year-old Saka’s controlled finish on the turn just before the end of a low-key first half put Arsenal ahead.

Adama Traore fired over as in-form Wolves lacked the attacking potency that has put them in sight of a possible place in next season’s Champions League.

Alexandre Lacazette came off the bench late on to secure the points for Mikel Arteta’s side with a clinical angled finish.

Arsenal’s third successive league win moved them to within three points of sixth-placed Wolves whose eight-match unbeaten league run came to an end in disappointing fashion.

Wolves are three points behind Manchester United in fourth spot and two behind Chelsea who play later.

It was Norwich’s fifth straight league defeat and Daniel Farke’s side have not scored a goal since the season restarted last month after the COVID-19 hiatus.

They stayed at the foot of the standings with 21 points — seven behind 17th-placed Watford — and relegation from the top flight for the third time in seven seasons looks increasingly likely with five games left.

“It was more or less our last chance to get back in the mix and we are disappointed. It was more like the performance we ask for,” Farke told the BBC.

Brighton took the lead midway through the first half from a sharp counter-attack in which Aaron Mooy found Trossard in the box and the Belgian calmly slotted the ball into the bottom corner with a first-time shot past goalkeeper Tim Krul.

Teemu Pukki and Todd Cantwell, who have scored 17 of Norwich’s 25 goals this season, both started on the bench and the duo failed to make an impact when they were introduced in the 67th minute.

Brighton, 15th, have now picked up seven points in their last four games to boost their chances of staying up.