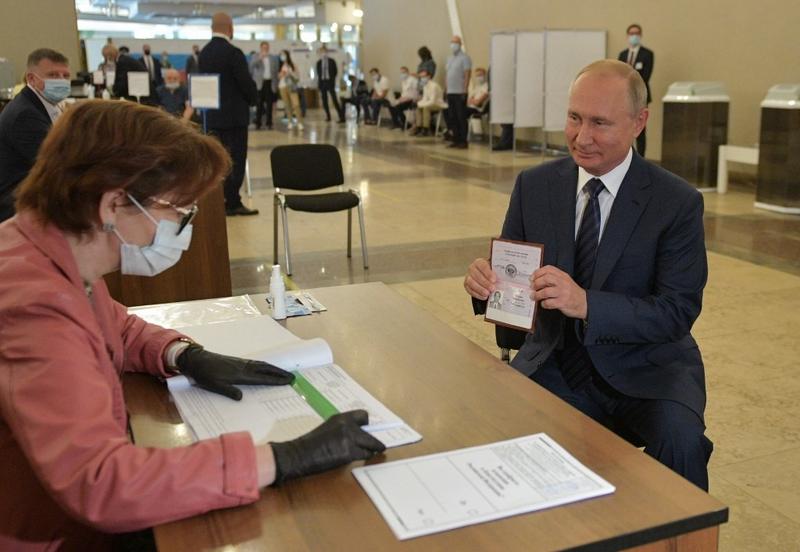 Russian President Vladimir Putin shows his passport to a member of a local electoral commission as he arrives to cast his ballot in a nationwide vote on constitutional reforms at a polling station in Moscow on July 1, 2020. (ALEXEI DRUZHININ / SPUTNIK / AFP)

MOSCOW - A total of 77.92 percent of Russians have backed 206 amendments to the country's constitution in a referendum, while 21.27 percent have voted against them, official data released on Thursday showed.

Under the amended constitution, Putin will be allowed to participate in the 2024 presidential race

The results were displayed on a billboard outside the Russian Central Election Commission, after all of the ballots were counted.

Under the amended constitution, Russian President Vladimir Putin will be allowed to participate in the 2024 presidential race, while more power will be given to the parliament.

The turnout rate in the referendum held between June 25 and July 1 was nearly 68%,  Russian Central Election Commission head Ella Pamfilova said at a briefing after the counting of the ballots was completed

The new constitution guarantees that the minimum wage will be no lower than the subsistence minimum of the able-bodied population, and that pensions will increase regularly.

The turnout rate in the referendum held between June 25 and July 1 was nearly 68 percent, CEC head Ella Pamfilova said at a briefing on Thursday after the counting of the ballots was completed.

She said the results will be officially confirmed on Friday, but the CEC has known no case that could influence the outcome of the vote.

Kremlin spokesman Dmitry Peskov told reporters that it was a "triumphal" referendum on public trust in Putin.

"Now the Russians have backed all the initiatives to amend the constitution. This will certainly become the foundation for a better future for the country," he said.