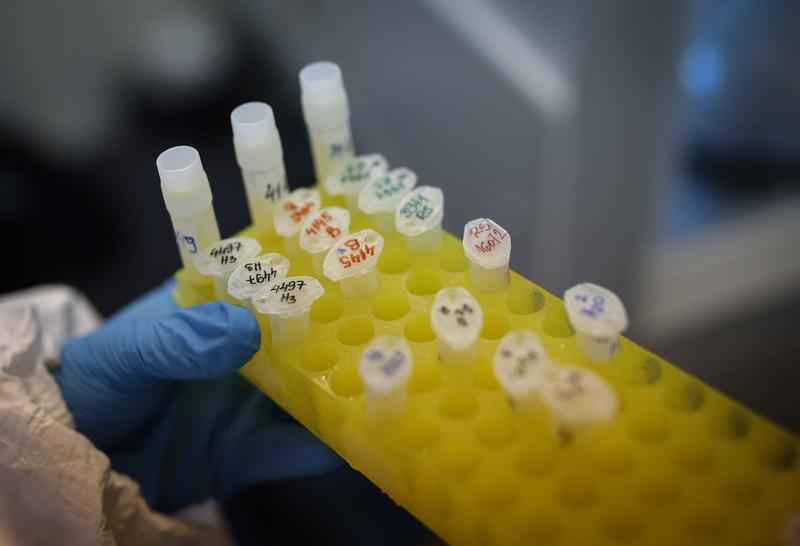 When a group of Chinese scientists gathered over barbecue and beer in a Toronto backyard a decade ago, talk drifted to their homeland’s vaccines, which had long lagged the developed world on quality and safety. Four of them decided to act.

They left top positions at global pharmaceutical companies in Canada to set up a biotechnology firm half a world away in Tianjin, China, hoping to produce vaccines on par with Western countries. Now, that company, CanSino Biologics Inc, is vaulting into the global spotlight as connections on both sides of the Pacific make it one of the front-runners in the race for a coronavirus vaccine.

ALSO READ: Gilead prices remdesivir at US$2,340 per patient

Yu has boosted his firm’s scientific prowess by tying up with the Canadian government’s largest research organization. At home, he’s worked with a prominent Chinese military scientist, first on an Ebola vaccine and now on CanSino’s experimental coronavirus shot.

In May, CanSino became the first globally to publish a full scientific study on its early human trials, an important step because it allows researchers worldwide to assess a vaccine’s potential.

The company -- which is yet to generate revenue and logged a US$22 million loss last year -- has so far kept up with, and occasionally even outpaced, Western pharmaceutical giants with the speed of its initial coronavirus vaccine trials.

The research is still too nascent to know if the shot from CanSino, or indeed any company, will provide the magic bullet countries are seeking to open up while the pandemic rages. But CanSino’s inroads show China’s young biotechnology industry is becoming a global contender.

CanSino “deserves credit for the speed with which they pushed the vaccine through pre-clinical studies and human testing,” said Wang Ruizhe, a pharmaceutical industry analyst at Capital Securities Corp in Shanghai. “It tells you something about their ability to mobilize and leverage the resources that it takes to get all these done. The resources required here are substantial.”

A spokesperson for the Chinese company, citing media reports in May, said Canadian Prime Minister Justin Trudeau is supportive of the Canadian researchers working on clinical trials for a coronavirus vaccine with CanSino.

China’s pharmaceutical industry has been dogged by safety incidents but, in recent years, parts of it have grown more advanced as hundreds of Chinese scientists trained in the West have come home.

Called hai gui, or “sea turtles,” these returnees have capitalized on relationships and expertise gained in countries like the US and Canada, and created new companies. CanSino’s CEO Yu -- 57, who has a doctorate from Canada’s McGill University in microbiology and was the head of vaccine development and production at Sanofi Pasteur in Canada -- belongs to this new breed of executives.

In the prospectus for CanSino’s 2019 public offering in Hong Kong, Yu described the difficult choices he and his colleagues made in forging their new path back home in China.

“Most of our families stayed in Canada, and we could only see them a few times a year,” he wrote. “When you think about your young kids and teenagers growing up without dads, when you know your wife had to shovel out of 10 inches of deep snow early morning in -20°C wind chill all by herself – those were the tough moments.” 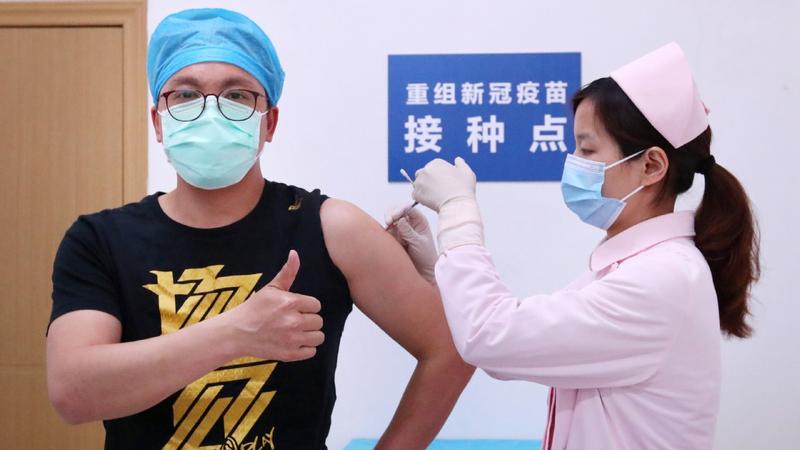 A volunteer, 36, is given a candidate vaccine for the novel coronavirus in Wuhan, Hubei province, March 24, 2020. (ZHU XINGXIN / CHINA DAILY)

The name CanSino represents the Chinese characters for health, hope and promises, while in English it’s a combination of Canada and China. Besides Yu, other top officials at the firm have Canadian connections.

Chief Scientific Officer Zhu Tao was also a senior scientist at Sanofi Pasteur in Canada. The company’s success has relied on threading the needle between both nations.

In February 2014, about five years after returning to China, Yu licensed a technology from the National Research Council of Canada called HEK 293 cell lines, which is required to produce large quantities of a vaccine reliably. That science went on to partly underpin CanSino’s viral vector technology.

An advanced way to make a vaccine, a viral vector is a genetically modified virus that is no longer harmful to humans, but can serve as a vehicle to carry the genes of another germ to prepare the immune system for attack.

Few Chinese companies had that technology in 2014, when a Chinese army researcher called Chen Wei began looking for viral vector expertise to produce a vaccine amid Africa’s Ebola outbreak.

A major general in China’s People’s Liberation Army, Chen headed the Institute of Biotechnology at the country’s Academy of Military Medical Sciences. She went on to work with CanSino to develop an Ebola vaccine that in 2017 was approved in China for emergency use and national stockpiling.

Chen has star status in China. In a nationalistic movie called Wolf Warrior II, the character of a scientist who develops a vaccine against a deadly African virus is believed to be modeled on her. She developed a therapy used by Chinese health workers during the SARS outbreak of 2003.

Chen is also known for a singular dedication to her work. In a 2004 interview with state-run CCTV, she said she presented her findings on the SARS therapy to Beijing’s municipal authorities after dosing her four-year-old son with it for two months because she was so sure about her research.

CanSino’s long-running relationship with Chen paid off again this year. CanSino and her team raced through pre-clinical studies on the coronavirus vaccine -- called Ad5-nCoV. They secured Beijing’s help on everything from isolating virus strains to animal testing. Chen and the institute couldn’t be reached for comment. 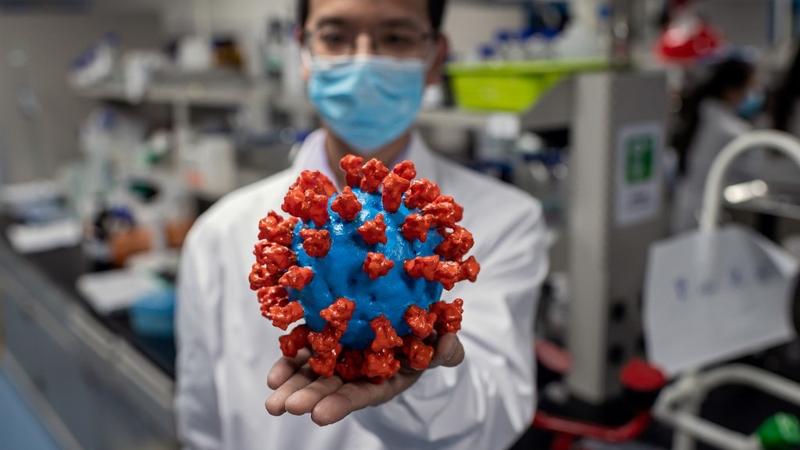 In this picture taken on April 29, 2020, an engineer shows a plastic model of the COVID-19 coronavirus at the Quality Control Laboratory at the Sinovac Biotech facilities in Beijing. Sinovac Biotech, which is conducting one of the four clinical trials that have been authorised in China, has claimed great progress in its research and promising results among monkeys. (NICOLAS ASFOURI / AFP)

The team started human clinical trials in Wuhan, once an epicenter of the outbreak. Massachusetts-based Moderna Inc, seen as one of the best contenders to produce an American vaccine, started its tests in the US the same day.

Less than a month later, CanSino began the second phase of wide-scale human trials. On May 22, when it published a study in the medical journal the Lancet, the results were mixed: The shot appeared to be safe and generated some immune response, but there were shortcomings.

Viral vector technology can have limitations when some people already have pre-existing immunity to the vector virus used to create the vaccine. This was the case for the adenovirus -- a genetically-altered cold-causing virus -- which CanSino used for its vaccine. Many of those with pre-existing adenovirus immunity showed diminished response to its coronavirus shot in the Lancet study.

For upcoming trials in Canada, CanSino has added a booster shot for some participants to attempt to address the lackluster response from those with pre-existing immunity to the adenovirus vector, according to a person with knowledge of its trial design who didn’t want to be named discussing information that’s not public.

CanSino is in the game and it’s about where the other so-called leaders are.

“CanSino is in the game and it’s about where the other so-called leaders are,” said William Haseltine, a former Harvard University HIV researcher. “Whether anybody will cross the finish line where we ever can see safety data that we would like to see is unknown.”

Final-stage trials could yet stymie CanSino’s outsized ambitions. Its Ebola vaccine was approved on an emergency basis after two stages of human testing, but the company never completed the final phase as the epidemic petered out in Africa.

CanSino doesn’t generate much revenue because most of its products, including two late-stage meningitis vaccines, are still in development.

The company has received some funding from Beijing for the coronavirus vaccine, although the amount isn’t large, the person familiar with its trials said.

CanSino’s founders’ ties with Canada are once again proving fortuitous as it looks to conduct Phase III tests on its vaccine. Still, there could be challenges in conducting the sizable studies required in the final stages if new coronavirus infections continue to taper in Canada. China has largely stamped out its outbreak.

Researchers at Dalhousie University’s Canadian Center for Vaccinology, who are leading the clinical trials, have said they hope to start Phase III studies of the CanSino shot as early as this fall. Canada’s National Research Council said if the vaccine candidate is approved by authorities there, it has the option to produce doses of the vaccine for emergency pandemic use in Canada. (CanSino is responsible for funding its own trials, Health Canada, the government’s health agency, said in an email.)

Other companies are also racing ahead. Moderna is set to test its vaccine among 30,000 people in the US in July, while an early-stage trial of a Pfizer Inc and BioNtech SE shot showed it‘s safe and prompted patients to produce antibodies against the coronavirus. A vaccine co-developed by the University of Oxford and AstraZeneca Plc also started the final stage of human testing in Brazil in June. 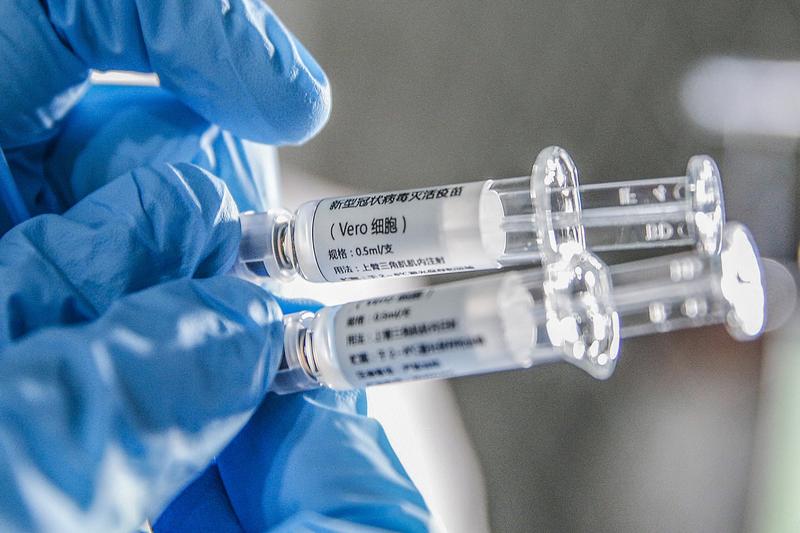 At home, state-run vaccine developer China National Biotec Group Co has secured approval from health authorities in the UAE to conduct Phase III testing for the two shots it developed against the coronavirus. Beijing-based Sinovac Biotech Ltd has inked a deal to do final tests in Brazil, too. The outcome for all of these companies -- and CanSino -- will only be known once this ultimate stage of scientific studies is complete.

“The viral vector CanSino is using is a relatively safe approach compared to other techniques but it’s hard to make a call on efficacy for now,” said Wang, the Shanghai-based analyst. “There’s no shortage of histories where promising efforts made it to the last stage of testing only to see things fall apart.”