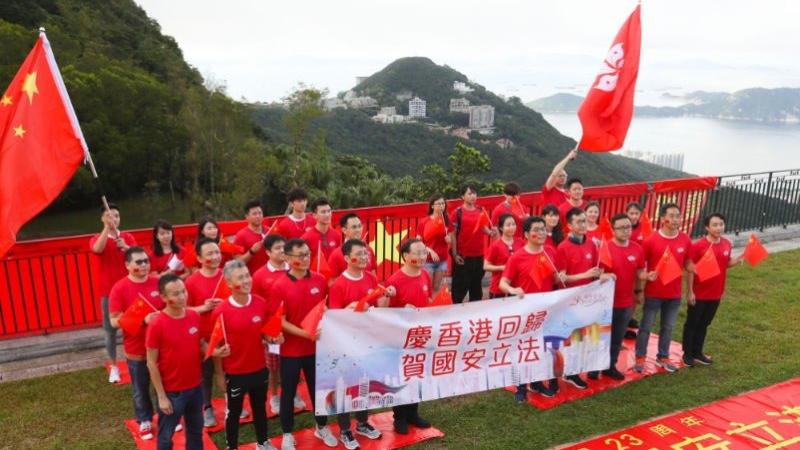 Hong Kong residents holding national flags pose for a photo with a banner celebrating the 23rd anniversary of Hong Kong's return to the motherland and the passage of the national security law, at the Victoria Peak in Hong Kong, July 1, 2020. (CALVIN NG / CHINA DAILY)

HONG KONG - Hong Kong reached a significant turning point on the 23rd anniversary of its return to the motherland as a law on safeguarding national security came into force.

Celebrations were held across Hong Kong Wednesday morning. Helicopters flew the national and regional flags over Victoria Harbor, and a fireboat sprayed a water-column salute. Choruses of residents sang the national anthem at multiple landmarks

Celebrations were held across Hong Kong Wednesday morning. Helicopters flew the national and regional flags over Victoria Harbor, and a fireboat sprayed a water-column salute. Choruses of residents sang the national anthem at multiple landmarks.

The festive mood stood in sharp contrast to the scenes a year ago when large groups of rioters stormed the Legislative Council complex of the Hong Kong Special Administrative Region (HKSAR) and wreaked havoc inside. It was one of the most atrocious violent incidents during months of social unrest last year.

On Tuesday, the Law of the People's Republic of China on Safeguarding National Security in the HKSAR was passed unanimously by the Standing Committee of the National People's Congress. It took effect at 11:00 pm local time the same day upon its promulgation by the HKSAR government in its Gazette.

At a reception held Wednesday morning, Chief Executive of the HKSAR Carrie Lam stressed the significance of the anniversary and said the new law would help restore stability in Hong Kong.

Lam called the enactment of the law a "turning point" to take Hong Kong out of the current impasse and to restore stability and order from the chaos.

The legislation follows the prolonged social disturbances that had gripped Hong Kong since June last year. Intensified violent incidents and riots trampled on order and the rule of law, threatened people's safety, and endangered national security.

The unrest exposed the tremendous risks Hong Kong faces in safeguarding national security and posed a grave challenge to "one country, two systems," Luo Huining, director of the Liaison Office of the Central People's Government in the HKSAR, said Wednesday at an opening ceremony of the activities to celebrate the 23rd anniversary of Hong Kong's return.

Echoing Lam's words, Luo said the promulgation of the law marks a significant turning point for Hong Kong to move from turmoil to stability, and a major milestone for the practice of "one country, two systems" in Hong Kong.

In Victoria Harbor, 150 fishing vessels, festooned with banners and the national flag, sailed in a procession to celebrate the anniversary and the passage of the new law. Joyful Hong Kong residents warmly greeted the boats on the harbor front.

The captain of the lead boat, surnamed Leung, has participated in every such parade since 1997. Leung, 68, said the lives of fishermen had become better and better since Hong Kong returned to the motherland. "Only when our country is prosperous, can Hong Kong be prosperous," he said. 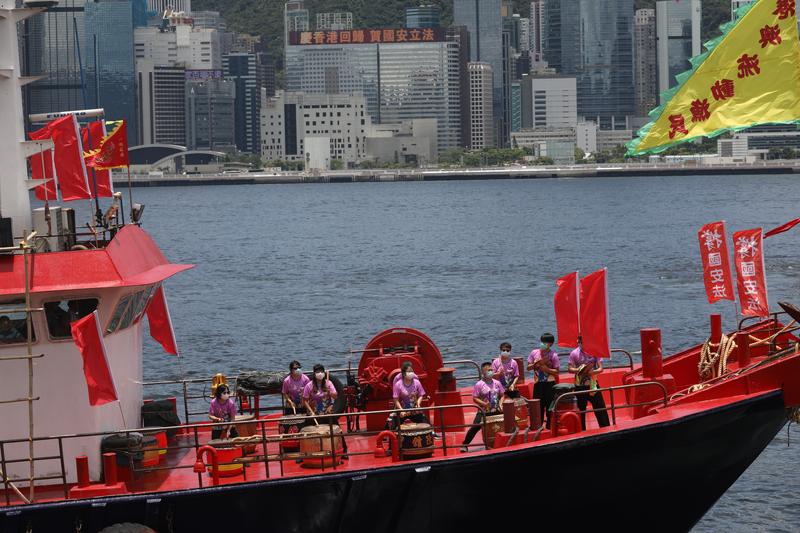 People on a vessel play drums and cymbals as they celebrate the 23rd anniversary of Hong Kong's return to the motherland, in Hong Kong, on July 1, 2020. (EDMOND TANG / CHINA DAILY)

"If it were not for the national security legislation, I would decide to leave Hong Kong at once," Angelo Giuliano said.

The Swiss expatriate, 50, was looking for opportunities in the financial consultancy field in Hong Kong three years ago, attracted by its stable environment and business opportunities, but found himself unexpectedly dragged into the chaos last year and faced real threats to his safety.

When Giuliano was trying to help clear a street blocked by debris, rioters hurled stones at him and his friends. After attending assemblies to protest the violence, his private information, along with that of his family, was leaked online.

Violence used to be a common occurrence during the social unrest. Rioters besieged government and legislative buildings, trashed metro stations, banks and shops, and assaulted innocent residents. Their actions plunged Hong Kong into chaos and a deep economic recession, and posed a significant and increasing threat to national security.

Hong Kong has enjoyed a high degree of autonomy and maintained its prosperity under "one country, two systems" since China resumed exercising sovereignty over Hong Kong in 1997

Radicals advocating "Hong Kong independence" colluded with external forces and applied "burn with us" and terrorist-style tactics, intending to destroy Hong Kong and contain China's development, said British barrister Grenville Cross, who had worked as director of Public Prosecutions in Hong Kong for 12 years since 1997.

Hong Kong has enjoyed a high degree of autonomy and maintained its prosperity under "one country, two systems" since China resumed exercising sovereignty over Hong Kong in 1997.

Regina Ip, a Hong Kong lawmaker and member of the Executive Council, expects the new law to help Hong Kong restore peace and order, guarantee the continued success of "one country, two systems," and chart the course for Hong Kong's long-term development.

After peace and order are restored, Hong Kong will be able to weather the external challenges and remain as an attractive destination for international investors and talents, observers said.

"What businesses want is stability and certainty. They want to know that their business isn't going to be disrupted by social unrest," said Stephen Phillips, director-general of investment promotion at Invest Hong Kong of the HKSAR government, noting that businesses generally welcome and understand the need for the legislation.

Over the past 23 years, Hong Kong has retained its capitalist system and lifestyle and made remarkable progress under "one country, two systems."

"It is 'one country, two systems' that enables Hong Kong to remain competitive and keep the position as the freest economy and an international financial hub," said Choi Koon-shum, chairman of the Chinese General Chamber of Commerce of Hong Kong.

Hong Kong's gross domestic product (GDP) doubled from 1997 to 2019 with an annual growth of 3 percent, well above the 2-percent increase of advanced economies on average, and Hong Kong's GDP per capita was higher than that of Germany, Japan and Britain.

Backed by a fast-growing mainland economy and the firm support of the central government, Hong Kong has overcome various difficulties since 1997, from the Asian financial crisis to the SARS outbreak and the global financial crisis, said Maria Tam, deputy director of the HKSAR Basic Law Committee under the NPC Standing Committee.

"I hope Hong Kong society can calm down at an early date so that we can shift the focus to improving people's livelihoods, bolstering growth and integrating into the national development," Tam said, noting new opportunities for Hong Kong businesses generated in the Guangdong-Hong Kong-Macao Greater Bay Area.

Ilan, a diamond dealer from Israel, is eager to regain a peaceful life in Hong Kong. Born and raised in the Middle East, he has been in Hong Kong for 18 years and fathered two children.

Thanks to the law, people will be able to return to all the things that made Hong Kong great to begin with, he said. "I believe that Hong Kong can be even better than before. I'm not just saying that. I truly believe it has great potential. It just needs to shift back on course."