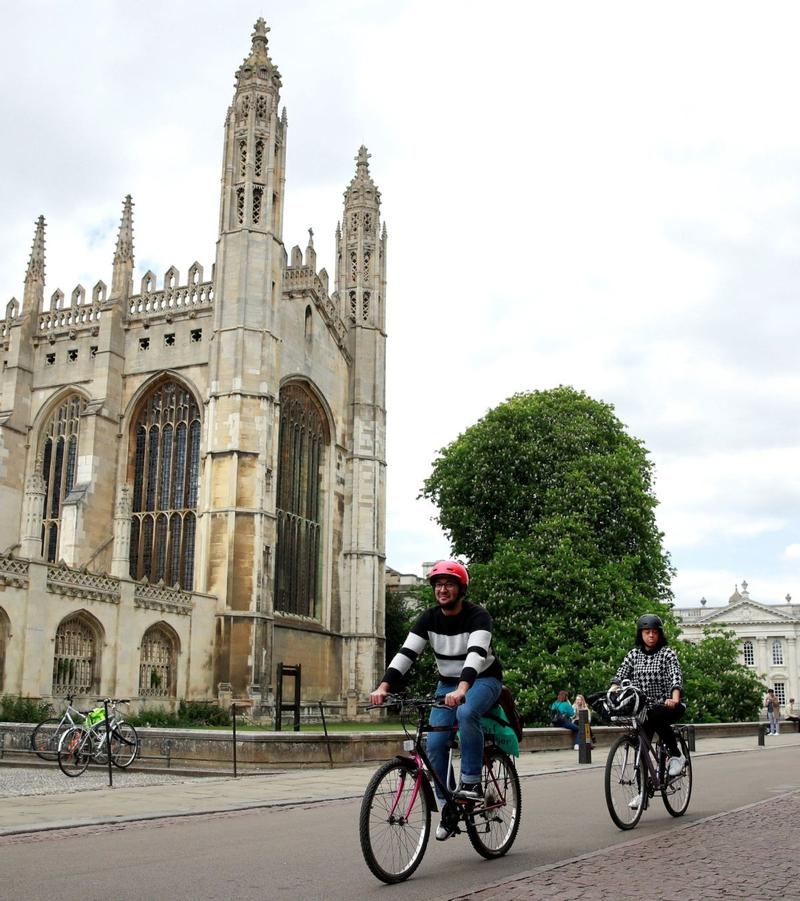 Cyclists are seen in front of Cambridge University, following the outbreak of the coronavirus disease (COVID-19), Cambridge, Britain, May 15, 2020. (PHOTO PROVIDED TO CHINA DAILY)

For the first time, the United Kingdom has overtaken the United States as the preferred overseas study destination for Chinese students, a report released Sunday showed.

In a survey for the annual Report on Chinese Students' Overseas Study, the UK was preferred by 42 percent of respondents, up by 1 percentage point from last year.

Study in the US was preferred by 37 percent of respondents, down by 6 percentage points.

Australia and Canada, both at 16 percent, tied as the third most popular destinations for overseas study, followed by Japan, Germany and Singapore.

The report attributed the shift in students' preference from the US to the UK to tense Sino-US relations in the past two years and the UK's advantages, such as the reopening of the Post Study Work Visa and quicker graduation requirements.

There has been a noticeable rise in students' eagerness to study in Japan and Singapore, the report said, with Asian countries increasingly attractive due to similar cultural environments, low costs and high-value diplomas.

The report was based on a survey conducted by Vision Overseas Consulting, a subsidiary of New Oriental Education and Technology Group, and market research firm Kantar Millward Brown from January to March. The survey covered 6,673 students who plan to study overseas and their parents.

Sun Tao, president of Vision Overseas Consulting, said the COVID-19 pandemic has had a significant impact on students' plans to study abroad this year but had not dampened their long-term enthusiasm to pursue overseas study.

"Students pursuing overseas study declined in 2003 and 2004 after the SARS(severe acute respiratory syndrome) epidemic, and we predict a similar, if not a sharper decline in the number of students going to study abroad this year and next year, especially for students going abroad for master's and doctoral degrees, as the COVID-19 pandemic has had a much wider impact than SARS," he said.

However, the need for students to pursue education abroad remained unchanged, and with vaccines hopefully being developed in the near future, the number of students going abroad to study will increase as the pandemic wanes globally, Sun said.

According to a survey of parents' professional backgrounds, most parents whose children prefer studying overseas hold nonmanagerial positions at work, accounting for 44 percent of the total－up 15 percentage points from 2016.

Ji Yu, who just graduated from Beijing International Studies University, said she plans to study for a master's degree in business at Lancaster University in the UK.

The 22-year-old said she chose a UK university over a US one because she could graduate more quickly and the tuition fees were lower, adding that she could get a master's degree at Lancaster University in a year. "The university still has not yet announced whether we can go to the UK to study or whether we will need to stay at home to take online courses due to the pandemic, and it would be a disappointment if I cannot physically attend the university," Ji said.