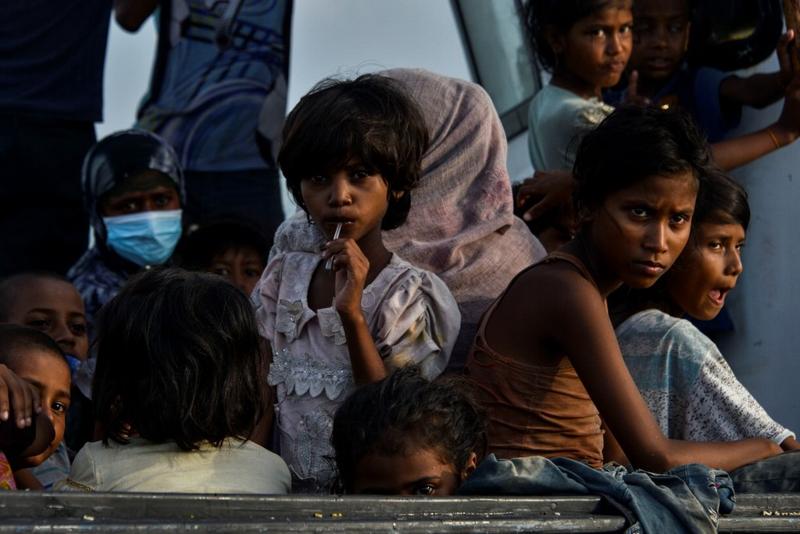 A boat carrying Rohingya refugees arrives on the shorelines of Lancok village in Indonesia's North Aceh Regency on June 25, 2020. Nearly 100 Rohingya from Myanmar, including 30 children, have been rescued from a rickety wooden boat off the coast of Indonesia's Sumatra island, a maritime official said. (CHAIDEER MAHYUDDIN / AFP)

SEUNUDDON, Indonesia  - Indonesian fishermen rescued nearly 100 Rohingya refugees, including 79 women and children, in Aceh province after officials said they were planning to push them back out to sea.

Countries around Southeast Asia have grown increasingly reluctant to accept refugee boats as they battle the novel coronavirus, but the Acehnese fishermen told Reuters that rescuing the Rohingya was a moral duty

Countries around Southeast Asia have grown increasingly reluctant to accept refugee boats as they battle the novel coronavirus, but the Acehnese fishermen told Reuters that rescuing the Rohingya was a moral duty.

“It is nothing more than a sense of humanity and part of our tradition in the north Aceh fishermen community,” said local fisherman Hamdani Yacob near the town of Seunuddon in northern Aceh. “We hope that the refugees will be looked after in our village.”

Authorities in Aceh confirmed the refugees had been taken ashore on Thursday and provided temporary housing. The fishermen had rescued them earlier in the week and they were anchored just off the coast, but officials had said they planned to push them back out to sea with a new boat, gasoline and food.

Images from a beach in the Seunuddon showed people from the local community towing the Rohingya boat to shore and helping to carry emaciated children onto land.

“If the government is incapable, us the community will help them, because we are human beings and they (the Rohingya refugees) are human too and we have a heart,” another local fisherman, Syaiful Amri, told Reuters.

Fleeing violence in Myanmar and refugee camps in Bangladesh, the Rohingya have for years boarded boats between November and April, when the seas are calm, to get to Southeast Asian countries including Malaysia, Thailand and Indonesia.

The crisis has worsened this year as regional states have shut their doors amid the coronavirus pandemic, leaving some boats drifting for weeks with hundreds of Rohingya aboard.

Scores of them have died as supplies have run out.

Usman Hamid, the executive director of Amnesty International in Indonesia, praised the decision to bring the refugees to land.

“Today’s disembarkation of Rohingya refugees is a moment of optimism and solidarity. It’s a credit to the community in Aceh who pushed hard and took risks so that these children, women and men could be brought to shore. They have shown the best of humanity,” he said.