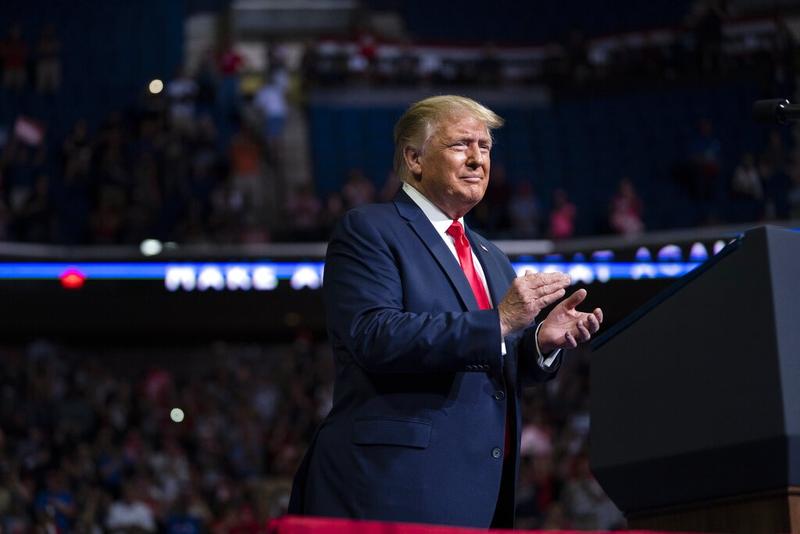 US President Donald Trump claps during a campaign rally at the BOK Center in Tulsa, Oklahoma, June 20, 2020. (EVAN VUCCI / AP)

US President Donald Trump, in his first rally held after a three-month hiatus due to the novel coronavirus on Saturday evening in Tulsa, Oklahoma, told his largely unmasked supporters that he had called for a virus testing slowdown, which has become one of the most controversial takeouts from a smaller-than-expected gathering.

Saying that he had done "a phenomenal job" fighting the pandemic, Trump told the rallygoers that US had tested 25 million people, far more than any other country. The "bad part" of it is that widespread testing leads to logging more caseloads, according to the president.

A White House official said the president was "obviously kidding" with that remark, according to a Reuters report.

Trump also used many names, including "Kung Flu" to refer to the coronavirus, a term leading US media, including The Washington Post and The Associated Press, reported is "widely viewed as racist".

While the president's comeback rally at the 19,000-seat Bank of Oklahoma Center was believed to be the largest indoor event in the country and perhaps the world since restrictions to prevent the virus began in the US in March, the arena sported a large swath of standing room on the stadium floor and many rows of empty seats in the balconies.

Only very few attendees wore masks or observed social distancing, even though hours before the rally started, Trump's campaign announced that six members of its advance team had tested positive.

"If he cared about public health he'd want to do more testing and find more cases," Robert Reich, former secretary of Labor, wrote on Twitter on Saturday night. "But he cares only about his own reelection, so he doesn't."

In his speech, Trump blasted his 2020 election rival, former vice-president Joe Biden as a "helpless puppet of the radical left", claiming that five months from now, he is going to defeat "sleepy" Joe Biden.

Biden railed against Trump for being "so eager to get back to his campaign rallies that he's willing to put people at risk and violate CDC guidelines－as long as they sign a waiver promising not to hold his campaign liable".

A statement Biden's campaign released following Trump's rally blamed US losses from the pandemic－a death toll of nearly 120,000 and costs of tens of millions their jobs－largely to the administration's failure to mobilize testing as quickly as needed.

"To hear him say tonight that he has ordered testing slowed－a transparent attempt to make the numbers look better－is appalling," it said.

Cal Jillson, a political scientist and historian at Southern Methodist University in Dallas, Texas, said that the US administration has been struggling with response to the coronavirus, the reopening of the economy, and demonstrations in the wake of the death of George Floyd nearly a month ago, which have eroded his support. Trump made no reference to Floyd in his nearly two-hour address but criticized "left-wing radicals" who he claimed were rioting in cities across the country.

"The unhinged left wing mob is trying to vandalize our history, desecrate our monuments, our beautiful monuments, tear down our statues and punish, cancel, and persecute anyone who does not conform to their demands for absolute and total control," Trump said.

"Large public rallies are unlikely to increase his standing unless he is also able to deal effectively with problems that led to deterioration of support in the first place," Jillson said.