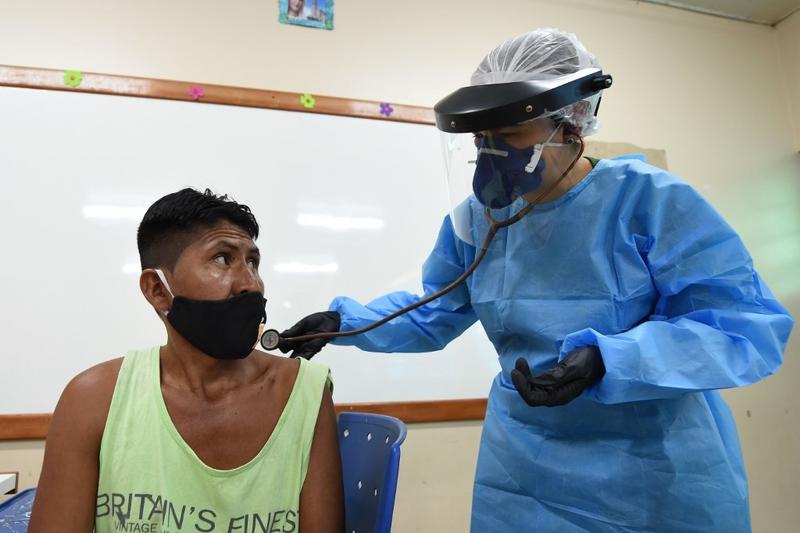 A brazilian indigenous of the Marubo ethnic group is checked by a member of the medical team of the Brazilian Armed Forces at a health post in Atalaia do Norte, Amazonas state, northern Brazil, on June 20, 2020. (PHOTO / AFP)

FRANKFURT / SANTIAGO  / RIO DE JANEIRO  / PARIS / ROME —Nearly 50,000 people have died from the coronavirus in Brazil, the world No. 2 hotspot, with 1,022 fatalities in the last 24 hours, the Health Ministry said on Saturday.

A total of 49,976 people have officially died from COVID-19 in Brazil, according to the ministry, with a total of 1,067,579 confirmed cases. Only the United States has recorded more deaths and cases.

Brazil confirmed its first case of the novel coronavirus on Feb. 26 and passed 1 million cases on Friday. Experts say the true numbers are likely far higher due to a lack of widespread testing.

Since first arriving in the continent-size country, the virus has spread relentlessly, eroding support for right-wing President Jair Bolsonaro and raising fears of economic collapse after years of anemic growth.

The announcement, to be made on Tuesday, will apply to all venues including offices, schools and pubs, the paper reported, adding that it will take effect from July 4.

The move will allow people to remain a metre away from others if they take additional measures to protect themselves, such as wearing a mask, according to the report.

Earlier on Saturday, culture minister Oliver Dowden said that Britain’s government will announce in the coming days whether it will reduce its two-metre social distancing rule for England.

As of Saturday afternoon, over 2.2 million confirmed COVID-19 cases have been reported in the United States, with death toll surpassing 119,000, according to a data tracking tool developed by Johns Hopkins University.

More than 1,000 employees at German meat processing firm Toennies have tested positive for coronavirus, prompting local health authorities to order all 6,500 employees and their families to go into quarantine.

Even though its management of the coronavirus crisis has been among the most successful in Europe, Germany has seen repeated outbreaks in slaughterhouses, whose employees are often migrants living in crowded company-provided accommodation.

Speaking at a press conference on Saturday, the meat company’s proprietor, Clemens Toennies, said the outbreak presented an “existential crisis” for his firm, which has suspended operations as authorities seek to control the outbreak.

France on Saturday saw the death toll from the coronavirus rise to 29,633 with 16 additional deaths registered in the last 24 hours, data released by the National Public Health Agency showed.

In total, 9,837 people remain hospitalized for COVID-19 infection, 133 fewer from a day earlier. The number of those who needed to be put on ventilator fell to 715 from 727 registered on Friday.

Further 641 positive cases were detected, bringing the total of confirmed infections to 160,093, the agency added.

In a further move to return to normalcy, the government decided on Friday to lift a ban on cinema and casino activities from next Monday, while sports events with no more than 5,000 people will be allowed from July 11.

The number of new infections from the novel coronavirus in Italy was 262, up from 251 reported on Friday but down from Thursday's 333, Italy's Civil Protection Department said on Saturday.

The total active infections decreased to 21,212 over the past 24 hours.

A total of 182,453 patients have recovered, up by 546 people compared to Friday. Forty-nine patients have lost their lives, bringing the overall death toll to 34,610.

Of those who tested positive for the novel coronavirus, 2,474 are hospitalized with symptoms.

The number of those in the intensive care units fell to 152, compared to 161 on Friday and 168 on Thursday.

A dog in Denmark was found contracting COVID-19 as the authorities detected COVID-19 in two North Jutland mink herds in one week, said the Danish Ministry of Environment and Food on Saturday in a press release.

The dog belongs to the owner of a North Jutland farm where COVID-19 has recently been found in two minks among samples from 46 minks there.

The Danish government will start to test 120 selected farms throughout the country to see if the infection among mink herds is a widespread problem.

The total number of confirmed COVID-19 cases stands at 12,391 in Denmark while 600 deaths remain unchanged since Friday, the daily update from the Statens Serum Institute showed on Saturday.

Chile on Saturday increased its estimate of cases and deaths caused by the coronavirus while a labor union at state-owned Codelco, the world’s largest copper producer, confirmed that a second company employee had died in the pandemic.

Amid an effort re-organize its much-criticized reporting of virus-related deaths, the government increased its estimated number of fatal cases to more than 7,000 from a previously-confirmed 4,265.

“In relation to those who died due to COVID without laboratory confirmation, that is, deaths in which COVID is a possible or probable cause, the number rises by 3,069,” said Rafael Araos, the country’s chief epidemiologist.

Cyprus opened its airports to travel from 18 "low risk" countries on Saturday, with experts wary about a possible recurrence of coronavirus infections.

Transport, Communications and Works Minister Yiannis Karousos wrote on Twitter that the eastern Mediterranean island has expanded its connectivity with more countries.

"We are continuing our efforts with our main concern, public health," Karousos added.

Hermes Airports Senior Communications Manager Maria Kouroupi told the official Cyprus News Agency that flights got under way to a slow start, with only nine arrivals and nine departures on the first day from Athens, Salonica, Munich, Frankfurt, Cologne and Zurich.

Though travelers from 18 countries categorized as being of low risk were not required to present a certificate of negative COVID-19 test, the number of passengers on each plane was small.

The number of confirmed COVID-19 cases in North Macedonia reached 5,005 as the Health Ministry reported 185 new cases on Saturday.

Eleven COVID-19 patients lost their lives in the last 24 hours, raising the death toll to 233 in the country, according to the ministry.

Meanwhile, 41 patients recovered on Saturday, taking the total number of cured cases to 1,904.

Egypt confirmed on Saturday 1,547 new COVID-19 cases, raising the total infections registered in the country to 53,758, according to Egyptian Health Ministry.

Death toll from the disease rose to 2,106 after 89 fatalities were added in the past 24 hours, health ministry spokesman Khaled Megahed said in a statement.

The spokesman said that 399 patients on Saturday were fully cured, bringing the total number of recoveries in the country to 14,327.

The total number of COVID-19 cases in the country hit 9,839, while the death toll stood at 213, said Hind Ezzine, head of the department of epidemic diseases of the Ministry of Health, at a regular press briefing.

The number of people cured has increased to 8,223 with 106 new recoveries, she added.

The COVID-19 death rate in Morocco stabilizes at 2.2 percent, with the recovery rate at 83.6 percent, the official noted.

This is so far the highest daily increase in the Horn of Africa country.

The Ethiopian Ministry of Health, in a statement issued on Saturday, revealed that from the total of 4,848 medical tests that were conducted within the last 24 hours, some 399 of them have been tested positive for COVID-19, eventually bringing the total number of cases in the country to 4,469.

The ministry further indicated that 398 of the latest confirmed cases are Ethiopian nationals and the other patient is said to be a foreign national, with an age range of four to 85.

A total of 1,122 patients who were tested positive for COVID-19 have so far recovered from the virus, in which 95 of the patients recovered during the past 24-hours period, it said.

Albania's Ministry of Infrastructure and Energy (MIE) announced on Saturday that all regular international flights from and to Tirana International Airport (TIA) will resume on June 22.

According to a statement from MIE, the restart of air transport will have as a priority the preventive and protective rules of health safety as recommended in the guidelines drafted by the international civil aviation organizations and public health institute.

The decision to resume regular international flights was taken in accordance with the statement of the European Commission, which on June 1 recommended the lifting of travel restrictions for Western Balkan countries including Albania as of July 1, said MIE.

Spain will let Britons enter without having to undergo a quarantine starting Sunday, under the same rules that apply for European Union citizens, Foreign Affairs Minister Arancha Gonzalez Laya said Saturday in an interview with the BBC.

Upon arrival, they will have their temperature checked and be asked to register a contact with authorities. Spain is relaxing rules out of respect for more than 400,000 Britons who have second homes in Spain, she said.

Of almost 84 million foreign-visitor arrivals to Spain last year, 18 million were from the UK, according to the National Statistics Institute.

Russia has recorded 7,728 COVID-19 cases in the past 24 hours, taking its total to 584,680, the country's coronavirus response center said Sunday in a statement.

Bulgaria's COVID-19 death toll has risen to 199 as six more patients have died in the past 24 hours, official figures showed on Sunday morning.

The ministry said that the number of confirmed infections has reached 3,872, an increase of 117 over Saturday morning.

Meanwhile, 19 people have been discharged from hospitals in the last 24 hours, it said, and 322 COVID-19 patients are currently hospitalized, with 13 in intensive care.

The cumulative number of confirmed COVID-19 cases in South Africa stood at 92,681 as of Saturday, Health Minister Zweli Mkhize said.

Up to 4,966 cases were reported in the past 24 hours, the highest daily surge since the outbreak in early March, Mkhize said.