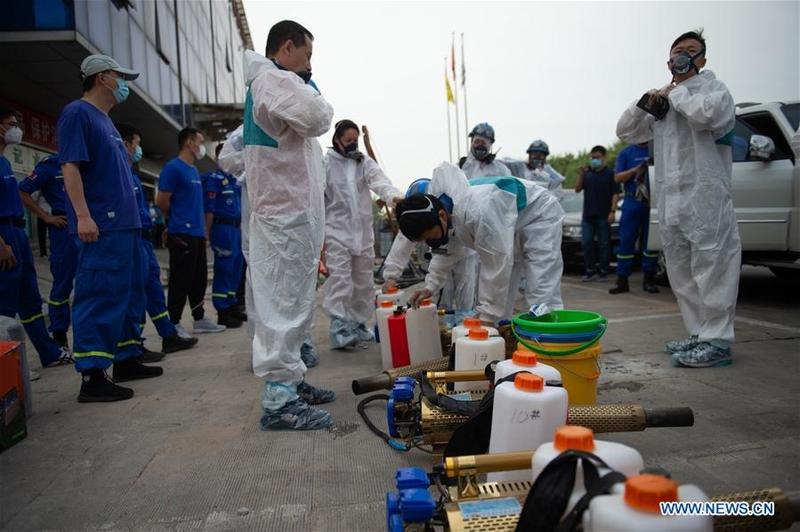 BEIJING - Beijing has so far tested about 356,000 inhabitants and canceled more than 1,000 flights after a spike of cases in the city, an epidemic-control official said Wednesday, as China's capital reported 31 new COVID-19 cases on Tuesday.

Zhang Qiang, a member of the city's epidemic-control office who oversees nucleic acid testing efforts, said those tested include workers at the sprawling Xinfadi food wholesale market in southern Beijing, where an employee was confirmed infected on Sunday, as well as residents living in nearby residential communities and people who had traveled near the region.

Currently, Beijing is testing an average of 400,000 people a day, and plans to step up testing capacity, an epidemic-control official said

Currently, the city is testing an average of 400,000 people a day, and plans to step up testing capacity, Zhang said at a news conference in Beijing.

Pang Xinghuo, deputy head of the Beijing Center for Diseases Prevention and Control (CDC), said the number of new infections is expected to rise further in the coming days, given that the Xinfadi was the largest produce market with large flows of people.

He said the initial analysis has found that the recent outbreak was triggered by food contaminated by the novel coronavirus that spread through human contacts.

More than a thousand flights to and from Beijing have been canceled as the capital raised its public health emergency response from the third to the second level on Tuesday due to the new cluster of local COVID-19 infections.

Airlines including Air China and China Southern Airlines said on Tuesday evening they would offer full refunds to passengers who purchased flights from or to Beijing.

Meanwhile, China State Railway Group said it will allow passengers, who booked train service to or from Beijing as of Tuesday, to cancel their tickets nationwide without charging fees as well.

Some long-distance interprovincial buses heading to and from Beijing have also stopped operations.

Separately, education authorities in Beijing have taken a quick response to the COVID-19 outbreak, requiring all students to return home and study online, a senior official said at a news conference. The education department also requires school staff and students to report their health conditions every day, especially third-graders at junior and senior high schools and their family members. 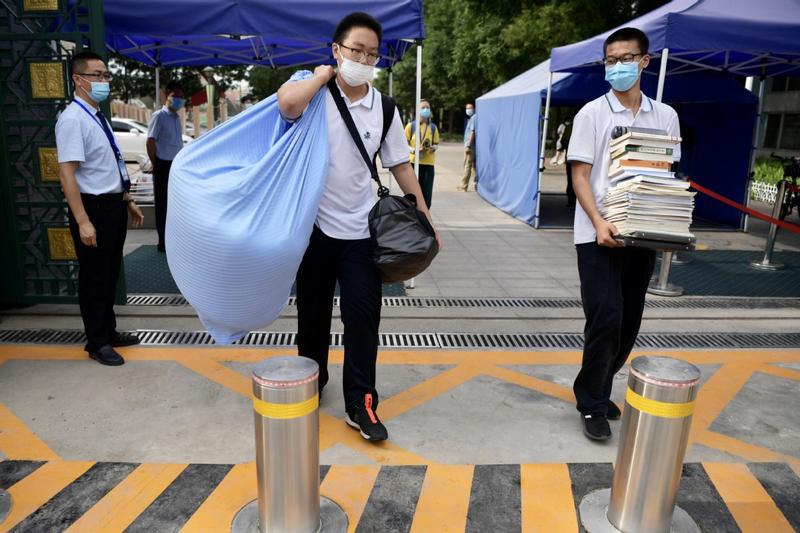 Students at a high school in Beijing leave the school with their books on June 17, 2020 after education authorities required all students to return home and study online as the capital battles a new cluster of local COVID-19 infections. (WEI XIAOHAO / CHINADAILY.COM.CN)

The recent resurgence of infections in Beijing might date back to a month earlier, according to the head of the Chinese CDC.

Gao Fu, director-general of the Chinese CDC, said at a conference in Shanghai on Monday that the new cases in Beijing might not have occured in late May or early June, because many viruses have been found in the environment of the Xinfadi market, which was caused by large number of asymptomatic cases and cases with mild symptoms there.

The novel coronavirus can survive in a dark and humid environment for a long time and suddenly cause new infections, which "is something we hadn't considered before", he said.

But he cautioned that it is only speculation and further confirmation is needed to determine when new infections start.

Macao to quarantine those with recent Beijing travel history

The government of the Macao Special Administrative Region (SAR) said on Wednesday it will require all people who have been to Beijing within two weeks prior to entering the city to be put under 14 days of medical observation at a designated location, Reuters reports.

A total of 44 newly confirmed cases were reported on the mainland Tuesday, of which 33 were transmitted domestically and 11 imported, the National Health Commission said

Langfang in Hebei province, which is close to Beijing, has conducted coronavirus tests on 1,886 residents as of Tuesday — all of them having had contact with the Xinfadi wholesale market and Jingshen seafood market since May 30.

Of the total, 360 people had received results as of Tuesday, all of which were negative, the city government said, adding that all 1,886 people have been quarantined for medical observation.

From Sunday to Tuesday, Hebei had confirmed eight COVID-19 patients, all related to the Xinfadi market. All of those were either store runners in the market or people who had close contact with newly confirmed cases.

Two people in Xiongan's Anxin county were punished by the local security bureau for hiding their journeys from Beijing after the capital reported confirmed cases from June 11, according to a statement released by the Xiongan government on Tuesday.

Hebei Xinfadi, a wholesale market in Gaobeidian, has tested more than 50 samples from its environment, as well as more than 100 people who run stores in the market or had contacts with markets in Beijing.

The results were all negative, with no live infections found, Xinhua News Agency reported on Tuesday. The testing covers all staff members and business runners in the market.

A total of 44 newly confirmed cases were reported on the Chinese mainland Tuesday, of which 33 were transmitted domestically and 11 imported, the National Health Commission said Wednesday in its daily report.

Out of all the local cases, 31 were reported in Beijing, one in Hebei province and one in Zhejiang province, the commission said.

Ten out of the 11 imported cases were reported in Gansu province while the other was reported in Sichuan province, the commission said.

No deaths related to the disease were reported Tuesday, according to the commission. Two people were discharged from hospitals after recovery while three new suspected cases were reported in Beijing.

As of Tuesday, the overall confirmed cases on the mainland had reached 83,265, including 252 patients who were still being treated, with seven in severe condition.

Altogether, 78,379 people had been discharged after recovery and 4,634 people had died of the disease, the commission said. 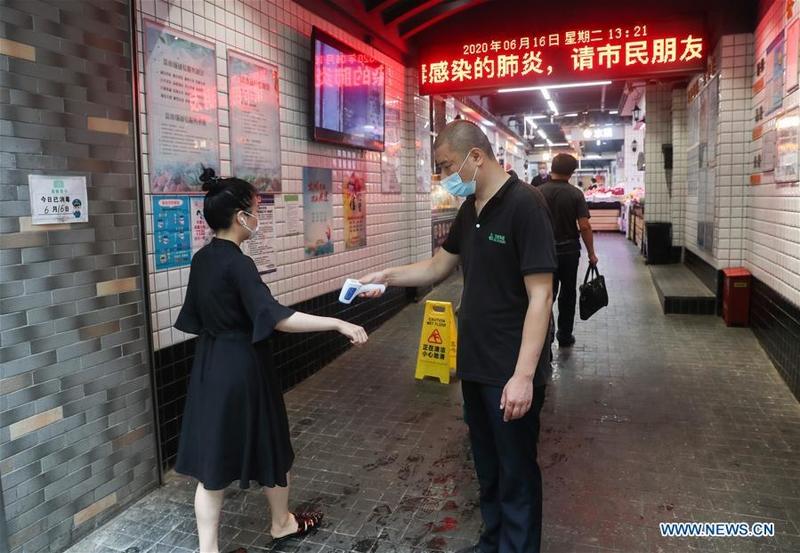 A woman gets her body temperature checked before entering a market in Shanghai, east China, June 16, 2020. (DING TING / XINHUA)

By Tuesday, the mainland had reported a total of 1,856 imported cases, of which 102 were still hospitalized. No deaths from the imported cases had been reported.

READ MORE: WHO: Working closely with China to control pandemic

A total of 1,069 patients in the Hong Kong SAR, 45 in the Macao SAR, and 433 in Taiwan had been discharged from hospitals after recovery.