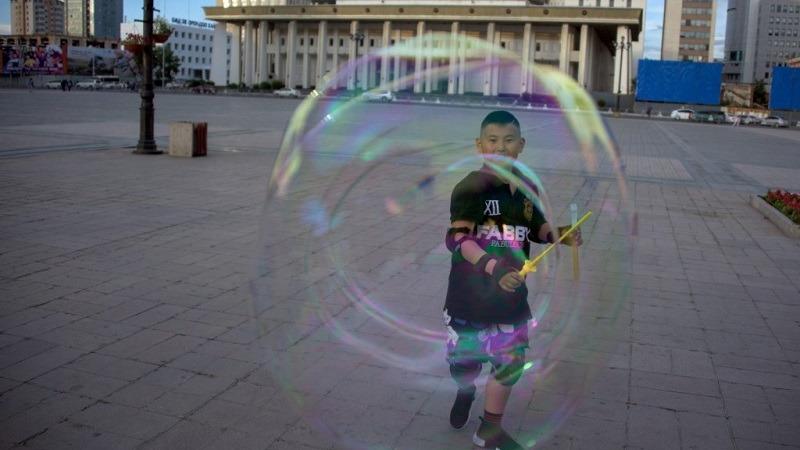 A boy plays with a bubble on the main square next to the Mongolian Parliament House in Ulaanbaatar on July 1, 2016. (JOHANNES EISELE / AFP)

BANGKOK - Residents in the Mongolian capital of Ulaanbaatar have voted on what public amenities they’d like using a mobile app, a new method that authorities may extend to other areas to improve transparency and efficiency, a government official said.

Nearly half of the city’s eligible voters picked their favoured facilities - ranging from children’s playgrounds to streetlights - through a mobile app even as they remained in their homes in recent months because of coronavirus lockdowns.

The process saw more women, young people and the elderly participate than in a previous paper-based system that only allowed household heads to vote, said Otgonbayar Nasan, head of policy and planning in the Municipality of Ulaanbaatar (MUB).

ALSO READ: China-Mongolia relations said to be on fast track

Digital voting is a more democratic process, and we can disaggregate the data at the city, district, and even the street level, and prioritise and plan for the short term and long term

Otgonbayar Nasan, Head of policy and planning, Municipality of Ulaanbaatar

“The traditional approach was expensive and time consuming, and did not give us an accurate picture because not everyone could participate,” he said on Thursday.

“Digital voting is a more democratic process, and we can disaggregate the data at the city, district, and even the street level, and prioritise and plan for the short term and long term,” he told the Thomson Reuters Foundation.

As authorities around the world sought to contain the coronavirus pandemic with lockdowns and restrictions on movement, businesses, government agencies and support groups went digital.

Smartphone penetration in Ulaanbaatar is about 90 percent, so digital voting is a feasible and inclusive option, Nasan said.

Nearly half of Ulaanbaatar’s 800,000 eligible residents voted on projects under the Local Development Fund (LDF) using the mobile application this year, with women making up about 54 percent of those who took part, according to MUB.

The LDF, which allocates federal money for local projects, is the only exercise in participatory budgeting in the central Asian country.

Participatory budgeting, which began in Porto Alegre, Brazil in 1989 as an anti-poverty measure, is now practised in over 3,000 cities worldwide for federal budgets, as well as in states and schools.

The process can bring communities together, and make investments “more effective, efficient and equitable”, said Carolin Hagelskamp, a professor at the Berlin School of Economics and Law.

“People become more willing to vote for investments that benefit the community as a whole. Digital tools can include a broader cross-section of the public,” she said.

MUB’s digital platform is backed by The Asia Foundation, a non-profit, and the Swiss Agency for Development and Cooperation, a government body.

Residents can track the votes and the progress of the selected projects on the app, said Khaliungoo Ganbat, manager of the urban governance project at The Asia Foundation.

“The application can demonstrate just how meaningful their participation has been,” she said.

In a country that is facing enormous climate-change impacts and where a fourth of the population still lives a traditional nomadic life, civic engagement is key to decision making and may be extended to other budgets as well, said Nasan.

“Every citizen pays tax, so they should have the right to say how they want their money to be spent.”