Singapore allows some travelers to transit through Changi airport 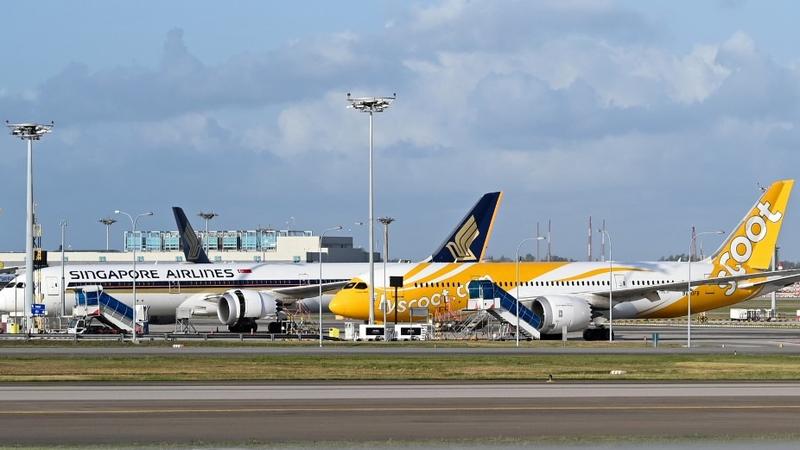 TOKYO / CAIRO / DUBAI / ADEN / SYDNEY - Travelers from selected cities in Australia and New Zealand will be able to transit through Changi Airport to other destinations from Thursday, said Singapore Airlines (SIA) on an advisory on its website.

These are the first passengers allowed to transit at the airport since Changi Airport announced last month that it will gradually allow transit travelers during Phase 1 of Singapore's reopening after the circuit breaker period.

SIA said that the transit flights are only for outbound journeys from these seven Australia and New Zealand cities: Adelaide, Brisbane, Melbourne, Perth, Sydney, Auckland and Christchurch.

Transfers are only allowed on flights between airlines within the SIA Group, it added.

"In line with the regulatory requirements, transit and non-transit passengers will be kept apart at Changi Airport. This is to ensure the health and safety of our customers and staff," said SIA.

Separately, Changi Airport said it has set up new Transit Holding Areas with safety measures in place to prepare for the gradual resumption of transit passenger services.

India has lifted an export ban on hydroxychloroquine, the anti-malarial drug touted by US President Donald Trump as a potential “game changer” in the fight against the COVID-19 pandemic, a minister said late on Wednesday. 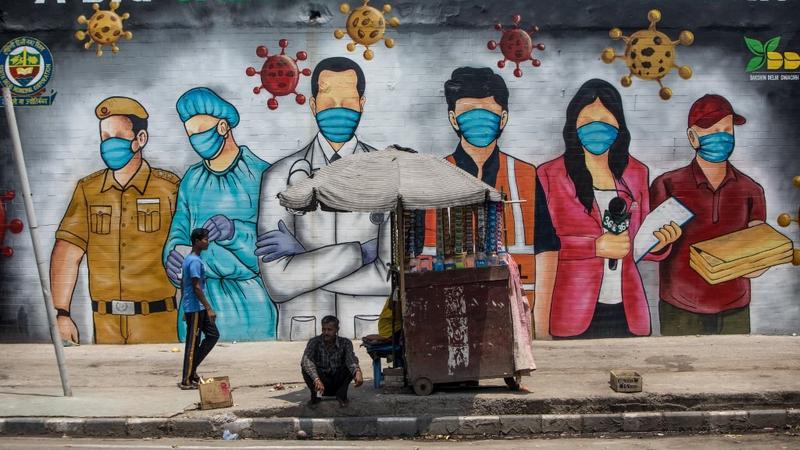 A man rests in the shade of a stall (right) while another walks past a mural showing images of frontline workers after the government eased a nationwide lockdown imposed as a preventive measure against the COVID-19 in New Delhi on June 11, 2020. (XAVIER GALIANA / AFP)

Manufacturers, except export-oriented units and those in special economic zones, would still have to supply 20% of their production to the domestic market, Gowda said.

The country, a leading exporter of generic medicines across the world, banned the export of the drug and its formulations in March as the coronavirus outbreak disrupted supply chains.

India's federal health ministry Thursday morning said that 357 new deaths due to COVID-19, besides fresh 9,996 positive cases were reported during the past 24 hours across the country, taking the number of deaths to 8,102 and total cases to 286,579.

This is the largest single day spike in the country both in terms of COVID-19 deaths and new cases.

A protester who attended the weekend Black Lives Matter march in Melbourne, Australia was among eight new COVID-19 cases confirmed for the State of Victoria on Thursday.

The person may have been infectious while attending the June 6 march and authorities are undertaking contact tracing, according to an emailed statement. The man was wearing a mask during the protest and wasn’t showing symptoms at the time, the Australian Broadcasting Corp reported.

Victoria Health authorities said the protester may have been infectious while at the demonstration, and that they will test all close contacts and put them in a 14-day quarantine.

Australia's treasurer has warned that the nation's economy will only rebound from the coronavirus crisis if domestic borders are re-opened soon.

The borders of South Australia, Western Australia, Queensland, Tasmania and the Northern Territory (NT) remain closed to prevent the spread of COVID-19. The federal government is pushing for them to be open by July.

As of Thursday afternoon there had been 7,285 confirmed cases of COVID-19 in Australia, an increase of nine cases in 24 hours.

The number of COVID-19 cases in Yemen's government-controlled provinces increased to 560 after 36 new infections were confirmed.

The death toll from the virus climbed to 129 in the government-controlled areas including the southern port city of Aden, while the number of recoveries remained at 23.

Since the outbreak of the novel coronavirus on April 10, the Yemeni government has taken several measures to contain the outbreak of COVID-19, including imposing a partial nighttime curfew in Aden and other major cities under its control.

The government called on donors and relevant international humanitarian organizations to provide support to help contain the pandemic.

Demonstrators attend a Black Lives Matter protest to express solidarity with US protestors at King George Square in Brisbane on June 6, 2020 and demand an end to frequent Aboriginal deaths in custody in Australia. (PHOTO / AFP)

The government is considering capping the number of people allowed into Japan when it reopens its borders for business travel this summer, Yomiuri reported without attribution. Arrivals could be limited to 200 to 250 a day from Australia, New Zealand, Vietnam and Thailand with plans to establish screening measures for Japanese national traveling abroad, Yomiuri said.

The reporting of 22 new cases won’t change Tokyo’s plans to move to the next stage of reopening businesses, public broadcaster NHK reported, citing an unidentified official at the local government, while the Tokyo Governor Yuriko Koike said she hoped to lift the city’s virus alert this week.

The Tokyo Metropolitan Government will ease restrictions to step 3 of its reopening plan at midnight on Friday, allowing for amusement parks and karaoke facilities to reopen.

Pachinko parlors, most of which have already reopened despite government requests to remain shut, will also be officially permitted. Bars and restaurants would be allowed to serve until midnight, versus 10 pm under current guidelines, and large-scale events of up to 1,000 people could be held.

The Afghan Ministry of Public Health on Thursday confirmed 748 new COVID-19 cases, bringing to 22,890 the total number of patients in the country.

"A total of 1,888 tests were conducted within the past 24 hours, and 748 cases were positive for COVID-19 in 12 of Afghanistan's 34 provinces," the ministry said in a statement.

Twenty-one COVID patients died within the period, taking the death toll to 426, the statement added.

Professor Nasima Sultana, additional director general of Directorate General of Health Services under the Ministry of Health, said the number of confirmed COVID-19 cases in Bangladesh has reached 78,052.

With 37 new deaths, she said, the death toll due to the COVID-19 pandemic in the country reached 1,049 on Thursday.

Iran, which has re-emerged as the hardest-hit country by the COVID-19 pandemic in the Middle East region, reported 2,011 new cases over the past 24 hours, taking the total confirmed cases to 177,938.

The country also reported 81 new deaths from the virus, raising the death toll to 8,506. A total of 140,590 coronavirus patients have recovered. 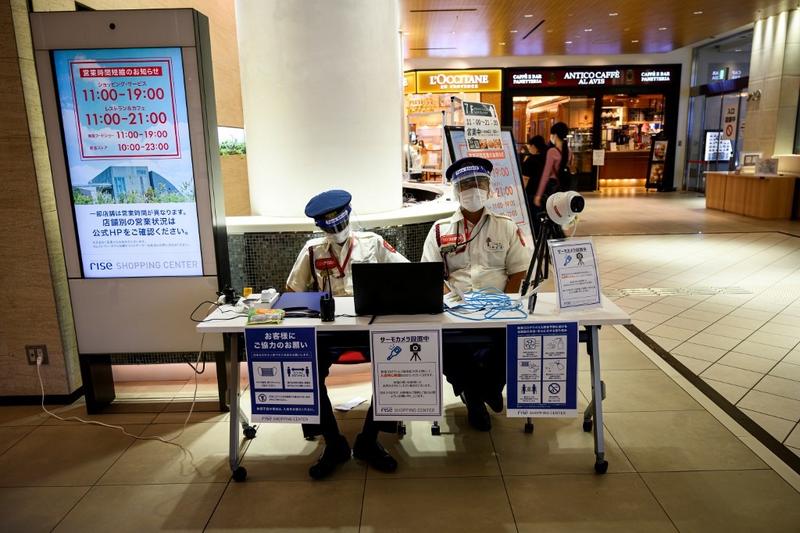 Security officers set a camera to check body temperature of visitors to implementation public health measures against the coronavirus (COVID-19) at the entrance of the Rise shopping centre at Futako Tamagawa neighbourhood in Tokyo on June 7, 2020.(BEHROUZ MEHRI / AFP)

The deaths from the virus in Israel remained at 299 while the recoveries rose to 15,187.

According to the deputy minister, of the newly confirmed, 19 cases were close contacts of the infected, 13 were unknown sources and four were imported, he said.

The Lao government announced an initial victory in the battle against COVID-19 after all 19 patients infected by the virus were discharged from hospitals and no new cases were detected for 59 consecutive days.

In Lebanon, the number of COVID-19 infections increased by 20 to 1,388, while the death toll remained unchanged at 30.

The country decided on the same day to open mosques in residential areas after nearly three months of closure, as part of the government's measures to restore normal life.

As a precautionary measure, worshippers must wear face masks, keep social distancing, and bring their own mats to pray on.

New Zealand retail spending surged in May when the nationwide lockdown was lifted but remains well below pre-covid levels.

Purchases on credit and debit cards at retail outlets rose 78.9% from April, Statistics New Zealand said Thursday in Wellington. That follows a 47.5% drop in April and a 3.2% decline in March. However, the value of spending at NZ$5.3 billion (US$3.5 billion) is 9% lower than in February.

Oman's Ministry of Health announced 689 new cases of infections, bringing the total number of COVID-19 cases in the country to 18,887, including 84 deaths and 4,329 recoveries.

The ministry also said 177 patients of COVID-19 have recovered, bringing the total number of recoveries to 4,329. And one new death was reported, bringing the death toll to 84.

People enjoy a coffee outside at the Fullers Fery terminal on June 09, 2020 in Auckland, New Zealand. (PHOTO / BLOOMBERG)

Pakistan’s opposition leader Shehbaz Sharif has quarantined himself at home after testing positive for the coronavirus, raising concerns about his health as he is a cancer survivor, his party leader said.

Sharif, 68, took many tests since he was having symptoms of the virus, said Marriyum Aurangzeb, a spokesperson for Sharif’s Pakistan Muslim League-Nawaz party, on Geo television. He has been receiving medical treatment for cancer, she said.

Pakistan has seen a spike in infections since Prime Minister Imran Khan eased the lockdown in the second week of May. The science and technology minister Fawad Chaudhry has said about one third of lawmakers are infected or are suspected to have contracted the virus as the lawmakers are meeting in Parliament for a budget meeting session in Islamabad.

The Hamas-run Ministry of Health in the Gaza Strip said that 41 patients have recovered. One died and 30 others are still receiving medical care.

The daily caseload moved between 30 and 60 for the past 11 days. Of the new cases, five were imported from overseas, lifting the combined figure to 1,312.

No more death was confirmed, leaving the death toll at 276. The total fatality rate stood at 2.31 percent. 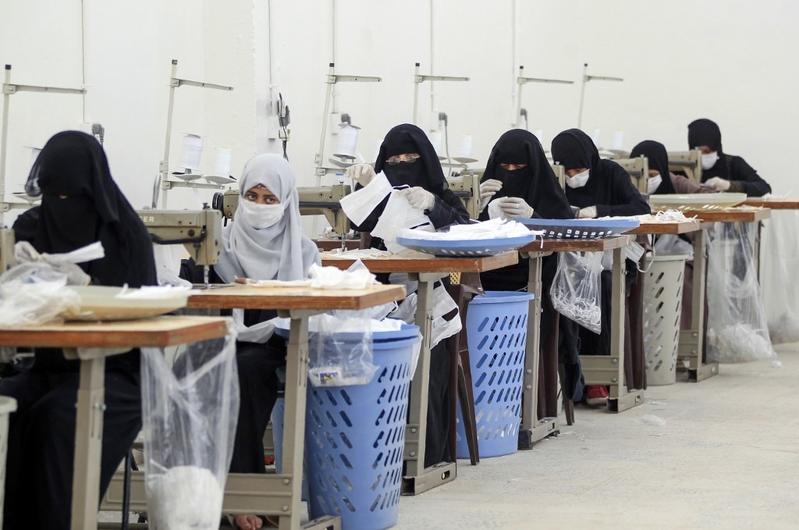 Yemeni seamstresses make protective masks at a textile factory in the capital Sanaa, on June 7, 2020, amid the novel coronavirus pandemic. (MOHAMMED HUWAIS / AFP)

In a bulletin, the ministry said total confirmed infections have increased to 24,175 while deaths have reached 1,036.

The death toll from the coronavirus in the country rose to 4,746 after 17 new fatalities were added in the past 24 hours, he said, adding that 2,241 patients recovered in the last 24 hours, raising the total recoveries to 146,839.

The Turkish authorities have started COVID-19 antibody tests on 153,000 people across the country to know the level of the immune status in society.

The United Arab Emirates (UAE) announced 603 new COVID-19 cases and one more death, raising the tally of infections to 40,507 and the death toll to 284.

The total number of recoveries from the virus in the UAE increased to 24,017 after 1,277 more fully recovered.