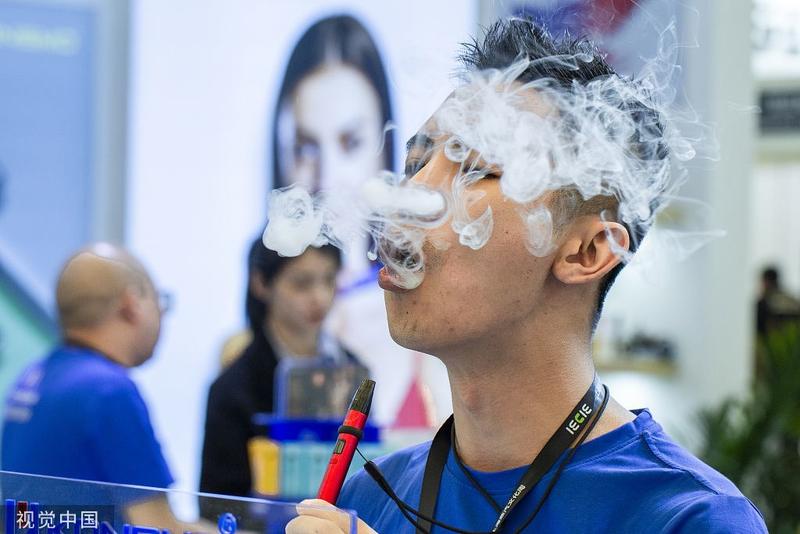 A man smokes e-cigarette in Shanghai in October. (PHOTO / VCG VIA CHINADAILY.COM.CN)

Tobacco use among Chinese middle school students has decreased in recent years, but the rate of vaping has more than doubled, according to a study published by the Chinese Center for Disease Control and Prevention.

The study, which surveyed nearly 290,000 students across China last year, also shows that 8.6 percent of high school students use tobacco products and 3 percent of them use electronic cigarettes, higher than the rate of students in lower grades. It was the first time that high school students, usually aged 15 to 18, were included in such a survey examining smoking in teenagers.

Mao Qun'an, head of the National Health Commission's planning department, said concerted efforts have strengthened awareness about the harm of tobacco among teenagers, and more public attention has been paid to curbing youth smoking in recent years.

"The smoking rate among middle school students has obviously dropped, but the rate of teens using e-cigarettes is trending up, and the degree of exposure to secondhand smoking is also worrisome," he said on this year's World No Tobacco Day on May 31.

The study was released on the same day.

Meanwhile, the vaping rate among middle school students rose from 1.2 percent in 2014 to 2.7 percent in 2019, and the proportion of them who have heard of e-cigarettes went up to nearly 70 percent.

The prevalence of smoking or vaping is the most pronounced among high school students who attend vocational institutions, with 14.7 percent of them using traditional tobacco products and 4.5 percent using e-cigarettes, according to the study.

Zhang Jianshu, president of the Beijing Tobacco Control Association, said, "E-cigarettes, with their appealing packages and diverse flavors, are particularly popular among teenagers. But many studies have shown that youngsters who vape are more likely to get addicted to nicotine and become chronic smokers."

"The increasing prevalence of e-cigarettes is likely to bring additional pressure and hurdles as the country aims to reduce the overall smoking rate," he said.

China looks to lower the rate of tobacco use among those aged 15 and above to under 20 percent by 2030, according to a health promotion plan released in July by the State Council. The rate stood at 26.6 percent in 2018.

"In order to achieve that goal in time, more needs to be done in terms of enforcing tobacco control regulations and stepping up campaigns to educate both the young population and adults about the health risks of tobacco use," Zhang said.

The survey shows that nearly one in 10 middle school students reported seeing teachers smoking on campus almost on a daily basis in the past month, and only 35 percent of them believed it would be difficult to wean off smoking.

In addition, factors that stimulate tobacco use among youth are still prevalent.

That includes poor implementation of the nationwide ban that forbids selling cigarettes to people under 18 years old, and the proliferation of advertising and promotion events of tobacco products.

Mao, from the National Health Commission, called on people from all walks of society to create a smoke-free environment for teenagers.

"Government officials, medical workers and teachers are encouraged to refrain from smoking during working hours, at workplaces or when young students are around. Parents are also expected to lead by example and guide their children to shun tobacco," he said.