A shell of a discovery

A massive mound of discarded mollusks, along with some exquisite woodwork, unearthed in Zhejiang has archaeologists excited over the discovery's possible implications, Wang Kaihao reports. 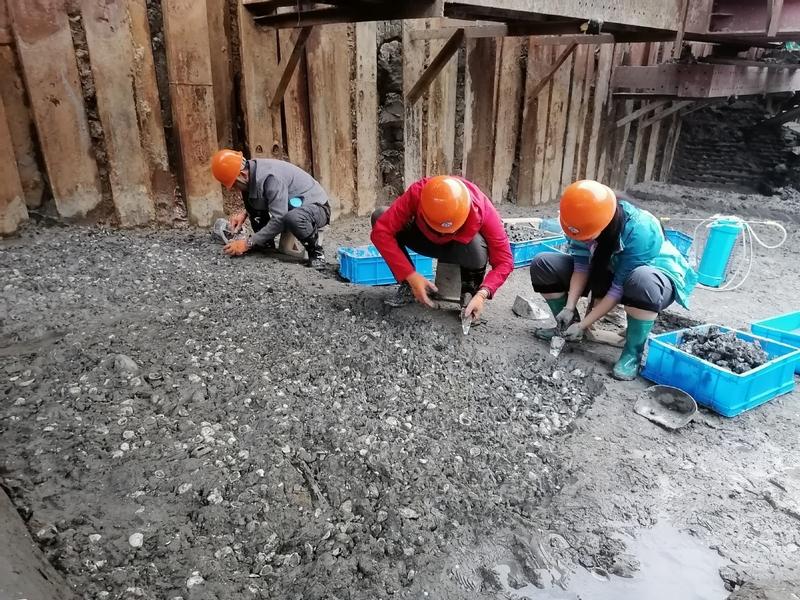 Excavation of the shell mound in a marshland is shored up by underground steel frames. (PHOTO PROVIDED TO CHINA DAILY)

It looks like a gigantic seafood market after a particularly abundant harvest of oysters, clams, conches and spiral shells.

However, something makes it exceptional: These intact shells have laid there for about eight millennia despite looking as if they have been freshly arranged.

Sun Guoping, a researcher at the Zhejiang Provincial Institute of Cultural Relics and Archaeology, tells China Daily that he did not expect to unearth such a well-preserved find at such a large site although his decades of experience had given him optimism.

Jingtoushan was first discovered accidentally in 2013, when construction workers broke ground on a factory that was supposed to be built there. Excavation formally kicked off in September, but the extraordinary findings on site were only released to the public on May 30.

Within a few months, more than 1,000 boxes－each roughly 50 cubic centimeters－of shells have been cleared from the mud within a 750-square-meter area in Yuyao, a coastal city in Zhejiang province.

"I cannot give you accurate statistics," says Sun, also the leading archaeologist at the Jingtoushan site. "But there could be thousands more boxes after the clearance work is done.

"It's so far the oldest and largest shell mound ever discovered in China," he adds.

Only the tip of the iceberg has been excavated, considering this shell mound roughly covers 10,000 square meters, according to Sun's investigation. Radiocarbon dating results show it was inhabited by humans sometime between 8,300 and 7,800 years ago. 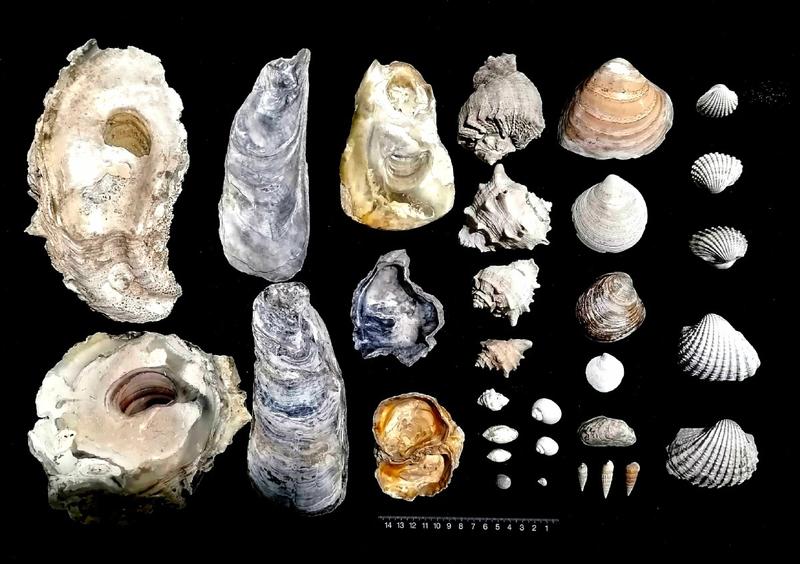 All sizes of discarded mollusk shells from around 8,000 years ago in Jingtoushan site in Yuyao, Zhejiang province. (PHOTO PROVIDED TO CHINA DAILY)

Shell mounds, archaeological sites mainly featuring rich mollusk shells, are found all over the world in coastal areas, notably in Denmark, Japan, and North America, as key indicators of human activity during the Neolithic period (roughly between 10,000 and 4,000 years ago in a Chinese context). In China, such mounds demonstrate how seafood dominated the diet of people in coastal provinces, ranging from Liaoning and Shandong in the north to Guangdong and Taiwan in the south－and most are less than 6,000 years old.

Until now, though, no such site had been found in Zhejiang or elsewhere on the Yangtze River Delta.

"Findings in Jingtoushan have thus filled a gap in the chain of studies," Sun says.

About 30 kilometers away from today's coast on the East China Sea, the 2-meter-thick shell mound was hidden 10 meters underground－also making it the deepest among Chinese shell mounds－in marshy area of former tidal flats. The muddy environment is a big challenge for Sun's excavation.

"We were worried that if we dug too deep, the marshland would collapse into the pit," he explains. "It's an unprecedented situation, which is not only difficult but also interesting."

Consequently, archaeologists came up with an ambitious idea: Steel frames were constructed underground to shore up the 750-sq m area, which is due to be excavated in the first phase of research.

However, it is thanks to the mud that the shells, and a myriad other relics composed of organic matter, remain so well-preserved and almost identical to their original appearance.

"Mud that is fully soaked in underground water functions as a protective layer," Lyu Houyuan, a geologist with the Chinese Academy of Sciences, comments. "As a result, they avoid oxidization."

A unique wooden component is speculated to be an early example of mortise-and-tenon joint. (PHOTO PROVIDED TO CHINA DAILY)

In Sun's eyes, Jingtoushan is the best preserved Neolithic heritage site in China due to this special natural condition.

"Shells, wood and some knitted bags made of reeds are so well preserved," he tells China Daily. "I would rather say they are still fresh."

Sun estimates that about 70 percent of the materials in the mound are shells, many of which are much bigger than those found on people's dinner tables nowadays.

"One variety of oysters are bigger than our palms," he says. "You will struggle to find such big oysters today, but it makes sense at that time because shells were less disturbed by people's fishing. They could grow freely and become as big as possible."

Some sharp shells were turned into cutting tools, and fish bones are also used to make needles and combs, Sun observes.

Still, a variety of other relics abound in the discovery. Deer bones are a common occurrence at the site, while those of boars are not, which probably indicates it was easier for locals to hunt deer 8,000 years ago.

Wooden components comprise another major discovery among the relics. Exquisitely designed handles of hatchets and oars may have already caused amazement at the site, but a set of unique artifacts with pegs and buckles nurtures an even bigger curiosity among researchers.

Sun speculates it could be China's earliest known example of an interlocked mortise-and-tenon joint. This traditional joinery technique for connecting separate pieces of wood has been a key architectural feature throughout ancient Chinese history, enabling people to build giant palaces without using a nail. However, as no residential ruins have been found in Jingtoushan, Sun says it is still too early to draw a definite conclusion. 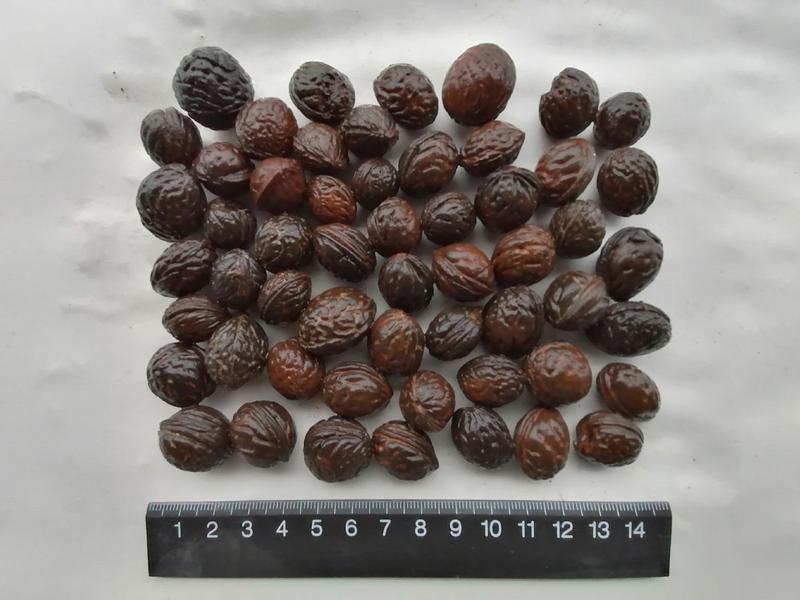 Only 1.5 kilometers away, there is a site of Hemudu Culture, a name famed in the world of archaeology. It is home to the, currently, earliest-known example of mortise-and-tenon joint used in Chinese architecture.

It was Hemudu Culture, which dates back 7,000 years and was discovered in 1973, that first made academia realize the significance of the Yangtze River to the origin of Chinese civilization. Previously, the focus was on Central China and along the Yellow River.

It also captured public attention with its splendid pottery. However, where this culture came from remains a mystery despite nearly half a century of research.

Were the residents of Jingtoushan its ancestors?

There have been a multitude of pottery shards found in Jingtoushan. As well as their similarities with Hemudu artifacts in their patterns and decorations, the new findings also feature some unique characteristics.

The geographical affinity gives people much room for imagination, but the 1,000-year chronological gap provides a threshold for easy judgment.

"We cannot say Jingtoushan is the direct origin of Hemudu Culture, but they at least appear to belong to the same family," Sun says. "If Jingtoushan was not Hemudu's 'father', it might be the 'grandfather'."

Sun cites that shell mounds almost simultaneously stopped being formed across all of coastal China after around 2,000 BC, when cultivated grains were widely accepted as people's dominant source of sustenance following a growth in the population. That would also probably explain why no shell mound has been found in Hemudu Culture, which had a well-established rice-growing technique.

That said, in Jingtoushan, the discovery of carbonated rice shows that the grain was included in the locals' diet, while rice hulls were also used in materials for making pottery.

"It is a crucial link for our studies on the origins of Chinese agriculture," he says.

According to Liu Bin, director of the Zhejiang Provincial Institute of Cultural Relics and Archaeology, the whereabouts of the Jingtoushan shell mound shows where the coastline was 8,000 years ago.

"In this case, archaeology offers direct evidence faster than a natural science approach, like geological drilling, to learn how sea level has changed," he says. "It also marks a breakthrough for Chinese archaeology in coastal areas where sites are deeply buried."

But Zhao says that it is too early to name an independent "Jingtoushan culture" in the archaeological glossary.

"Its cultural facade needs to be examined more deeply to show its connection with others," the professor says.