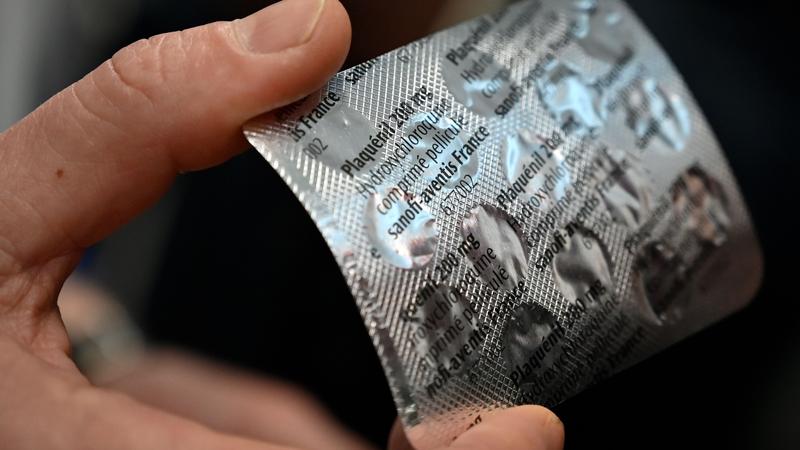 Medical staff shows on February 26, 2020 at the IHU Mediterranee Infection Institute in Marseille, a packet of Plaqueril, tablets containing hydroxychloroquine, drug that has shown signs of effectiveness against coronavirus. (BLOOMBERG)

Three of the authors of the article retracted it, citing concerns about the quality and veracity of data in the study

Three of the authors of the article retracted it, citing concerns about the quality and veracity of data in the study.

The anti-malarial drug has been controversial in part due to support from Trump, as well as implications of the study published in British journal The Lancet last month, which led several COVID-19 studies to be halted.

The three authors said Surgisphere, the company that provided the data, would not transfer the dataset for an independent review and they “can no longer vouch for the veracity of the primary data sources.”

The fourth author of the study, Dr Sapan Desai, chief executive of Surgisphere, declined to comment on the retraction.

“When you have reputable journals that put this kind of work out and are retracted 10 days later, it just increases mistrust,” said Dr Walid Gellad, a professor at University of Pittsburgh’s medical school.

The Lancet said on Thursday it “takes issues of scientific integrity extremely seriously, and there are many outstanding questions about Surgisphere and the data that were allegedly included in this study”.

Another study in the New England Journal of Medicine that relied on Surgisphere data and shared the same lead author, Harvard Medical School Professor Mandeep Mehra, was retracted for the same reason.

Some countries have seen “upticks” in COVID-19 cases as lockdowns ease, and populations must continue to protect themselves against the coronavirus, the World Health Organization (WHO) said on Friday.

“On upticks, yes we have seen in countries around the world - I’m not talking specifically about Europe - when the lockdowns ease, when the social distancing measures ease, people sometimes interpret this as ‘OK, it’s over’,” WHO spokeswoman Margaret Harris told a UN briefing in Geneva.

“It’s not over. It’s not over until there is no virus anywhere in the world,” she said, adding that U.S. protesters must also take precautions when gathering.

Separately, the WHO said the expulsion of its representative in Equatorial Guinea followed a "misunderstanding over data" and denied that she had falsified the central African nation's COVID-19 case numbers.

The Equatorial Guinea government asked WHO on May 26 to immediately replace the representative, Triphonie Nkurunziza, and the prime minister later told lawmakers that she had inflated the number of COVID-19 cases.

WHO confirmed Nkurunziza's expulsion at a news conference on Thursday, without providing any details, before issuing a statement later in the day that called the government's decision "regrettable" and defended Nkurunziza's integrity.

Around 5.21 percent of the Spanish population has been infected by the novel coronavirus, according to the second part of a major study into the prevalence of the virus which was published on Thursday by the Spanish Ministry of Health, Consumer Affairs and Social Welfare.

The finding is only slightly different from the results in the first stage of the investigation, which were published on May 13 and showed 5 percent of those tested had been infected by COVID-19.

Blood samples were taken from a representative sample of 63,564 people of all ages from every region of Spain between May 18 and June 2 in order to look for antibodies of the coronavirus and determine the proportion of the population that has developed immunity.

The study once again showed that the different parts of Spain have been affected differently by the virus, with a much greater proportion of the population infected in central Spain than other parts of the country.

About 11.4 percent of those tested in the Madrid region showed the presence of antibodies, while the levels were even higher in the provinces of Segovia (12.6 percent), Cuenca (14.2 percent), and Soria (14.7 percent).

The mayor of Rio de Janeiro allowed more than 10,000 street vendors to go back to work on Thursday and Brazil’s president pressed for legal action to force local governments to reopen beaches, as the coronavirus death toll in the country surpassed that of Italy.

Brazil’s total COVID-19 death toll is now the third highest in the world after its Health Ministry reported 1,437 deaths in the last 24 hours and 30,925 additional coronavirus cases

Brazil’s total COVID-19 death toll is now the third highest in the world after its Health Ministry reported 1,437 deaths in the last 24 hours and 30,925 additional coronavirus cases.

The Latin American nation has now reported 34,021 deaths from the coronavirus, trailing only the United States and the United Kingdom.

Since the beginning of the pandemic, right-wing President Jair Bolsonaro has downplayed the virus, saying on Tuesday that death is “everyone’s destiny,” and that hunger and unemployment will ultimately prove more deadly.

Among his allies is Rio de Janeiro Mayor Marcelo Crivella, who has also pushed for a reopening in recent weeks after over local governments shutdown business to stem the spread. On Tuesday, the city of nearly 7 million people allowed Cariocas, as residents are known, to exercise outside, while a small subset of shops was allowed to reopen.

On Thursday, Crivella said over 10,000 street vendors could return to work.

“The other day, some kid told me: I prefer to die of coronavirus than see my family die of hunger,” Crivella told journalists.

Later in the day, during a Facebook Live session, Bolsonaro encouraged the federal solicitor general to sue states to force them into reopening their beaches.

According to data from Johns Hopkins University’s Center for Systems Science and Engineering, the total number of confirmed COVID-19 cases around the world reached 6,639,092 on June 5.

Russia reported 8,726 new cases of the novel coronavirus on Friday, pushing the total number of infections to 449,834.

Officials said 144 people had died in the last 24 hours, bringing the official nationwide death toll to 5,528. 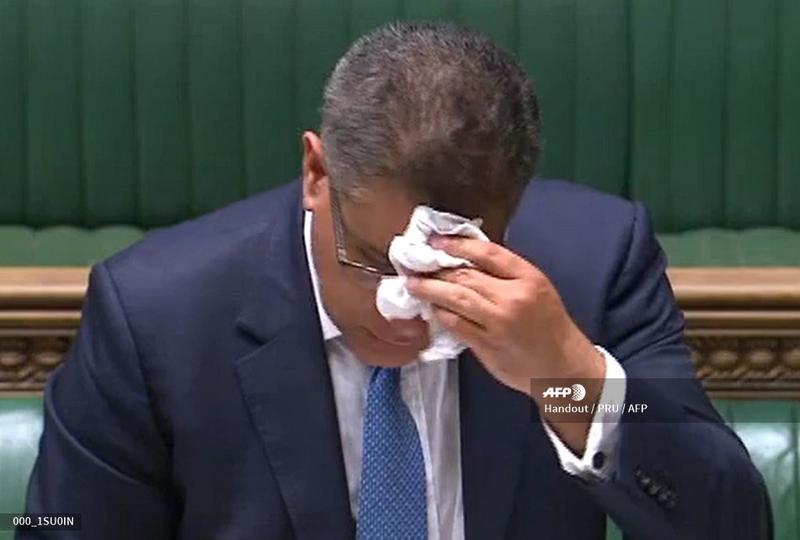 A video grab from footage broadcast by the UK Parliament's Parliamentary Recording Unit (PRU) shows Britain's Business Secretary Alok Sharma wiping his brow as he makes a statement in the House of Commons in London on June 3, 2020, as lockdown measures ease during the novel coronavirus COVID-19 pandemic. (HANDOUT / PRU / AFP)

The United Kingdom’s death toll from people who tested positive for COVID-19 has risen by 176 to 39,904, the government said on Thursday.

On Wednesday a separate tally of UK deaths using official data from England, Scotland, Wales and Northern Ireland, drawn mostly from death certificate data and including suspected cases, showed a total of more than 50,000 earlier.

Meanwhile, British business minister Alok Sharma said he had tested negative for COVID-19, in a statement posted on Twitter a day after he had been taken ill inside parliament.

“Just had results in and my test for #COVID-19 was negative,” he tweeted.

“Huge thanks to everyone for their really kind messages over the last 24 hours and my grateful thanks also to the parliamentary authorities and Speaker for their support yesterday.”

The government plans to help companies with more financing and incentives, Costa said in Lisbon. It will also increase some benefit payments, with unemployment expected to rise to 9.6 percent by the end of the year.

The prime minister said that anti-virus measures that remain in place in the Lisbon region may be lifted on June 15. The government last week delayed the planned reopening of malls in Lisbon after recording new clusters of the virus outbreak near the city.

The number of confirmed coronavirus cases in Germany increased by 394 to 183,271, data from the Robert Koch Institute (RKI) for infectious diseases showed on Friday.

France will add incentives for apprenticeships and help businesses that keep staff on payroll during an economic downturn to prevent losing a generation to long-term unemployment triggered by the coronavirus.

The move will cost around 1 billion euros (US$1.1 billion), an official in President Emmanuel Macron’s office said. The government will also expand the financing of a system that lets struggling companies furlough workers if they reach an agreement with unions to adjust working hours and conditions over the long-term.

Young people are a particular concern, with the government estimating 15 percent of those in professional training dropped out during the shutdown to contain the virus.

Mexican President Andres Manuel Lopez Obrador earlier defended his government’s handling of the outbreak after reported deaths spiked this week. Health officials said the fatalities included many deaths that happened weeks ago and have now been reclassified.

The new way of counting deaths seemed to confirm the pandemic has had a greater impact in Latin America’s second most populous country than the official numbers previously showed.

Peru authorized more parts of the economy to reopen even as virus deaths approached 5,000 and hospitals in Lima begin running low of oxygen for patients.

Industries from road building to beer making and printing were cleared to restart along with inter-provincial transport services, according to a decree on Thursday. President Martin Vizcarra said the move would see 80 percent of the economy reopened, up from 55 percent.

The country has become a virus hot spot, with the most cases in Latin America after Brazil and total deaths approaching 5,000.

The COVID-19 induced lockdown will cause a loss of over US$5.5 billion to the South Africa's economy

The COVID-19 induced lockdown will cause a loss of over US$5.5 billion to the country's economy following the cancellation or postponement of the events in the creative industry, said the South African Cultural Observatory (SACO) on Thursday.

The SACO conducted an online study on the impact of COVID-19 induced lockdown to the sector.

Of the 595 usable responses from performing arts, heritage, publishing, music, film, video, and design and support activates, 95 percent had their activities cancelled or indefinitely postponed, while 45 percent of the respondents did not continue with any normal business activities during lockdown.

"We are hopeful that the report provides relevant insights about the impact of the COVID 19 pandemic and will jolt both decision makers in the public and private sector as well as the society at large to think deeply about the role we can all play to contribute in supporting the sector," said Unathi Lutshaba, SACO executive director.

A cloud of expectation hangs over Kenya as citizens are ready for the easing of some restrictions put in place to curb the spread of the COVID-19.

Private businesses, places of worship and government offices are among entities that are gearing up for the resumption of operations after June 6, the day when current restrictions end and President Uhuru Kenyatta is expected to review the measures.

Kenyatta hinted that the government will loosen some of the restrictions, noting that lockdowns and curfews are unsustainable in the long term.

Karanja Kibicho, Interior Principal Secretary of Kenya, said on Wednesday that the government has found itself in a tight spot since the outbreak of the disease, whose cases have taken an upward trajectory, clocking 2,340 on Thursday.

Mozambique registered 36 new cases of infection by the novel coronavirus in the last 24 hours, said the National Director of Public Health Rosa Marlene on Thursday in Maputo.

Speaking at the daily press conference to update the situation on the disease, Marlene said a total of 529 samples have been tested in the past 24 hours, as a result of active surveillance and contact tracking.

Of the new suspected and tested cases, 36 were positive for COVID-19, said Marlene, adding that the country thus has so far registered 352 positive cases.

The health official said that 33 of the new cases are of Mozambican nationality and three are foreign nationals, and all of them, currently in isolation at home, have mild to moderate symptoms or no symptoms at all.