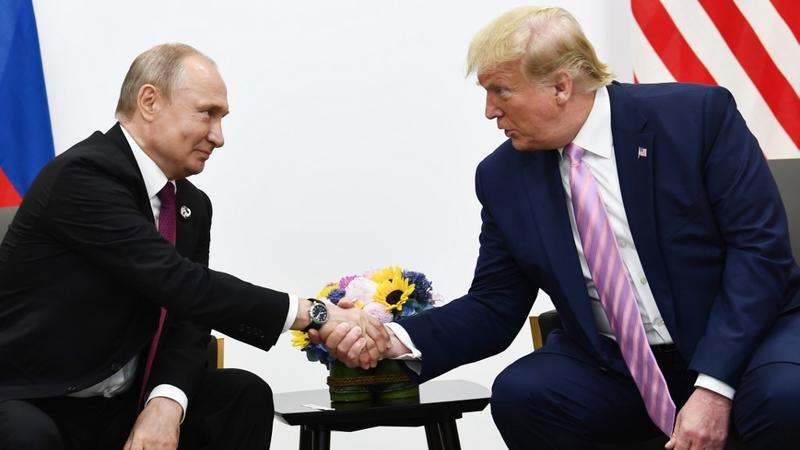 In this June 28, 2019 photo, US President Donald Trump (right) attends a meeting with Russia's President Vladimir Putin during the G20 summit in Osaka. (Brendan Smialowski / AFP)

MOSCOW - US President Donald Trump told President Vladimir Putin in a phone call on Monday about his idea of holding an expanded Group of Seven summit later this year with a possible invitation for Russia, the Kremlin and the White House said.

The two leaders also discussed the OPEC+ deal on oil output cuts, and measures to fight the coronavirus, the Kremlin said

Trump said on Saturday he would postpone a G7 summit he had hoped to host next month until September or later and expand the list of invitees to include Australia, Russia, South Korea and India.

A White House statement on the call said Trump and Putin discussed “progress toward convening the G7.”

Britain and Canada have since spoken out against the idea of readmitting Russia to a forum it was expelled from in 2014 after annexing the Crimea region from Ukraine.

Russia had said earlier on Monday that it was looking for more details before responding.

The two leaders also discussed the OPEC+ deal on oil output cuts, and measures to fight the coronavirus, the Kremlin said. Putin thanked Trump for a delivery of US ventilators, the Kremlin said, and congratulated Trump on the first spaceflight of NASA astronauts from US soil in nine years.

READ MORE: US does not expect to pull out of New START accord