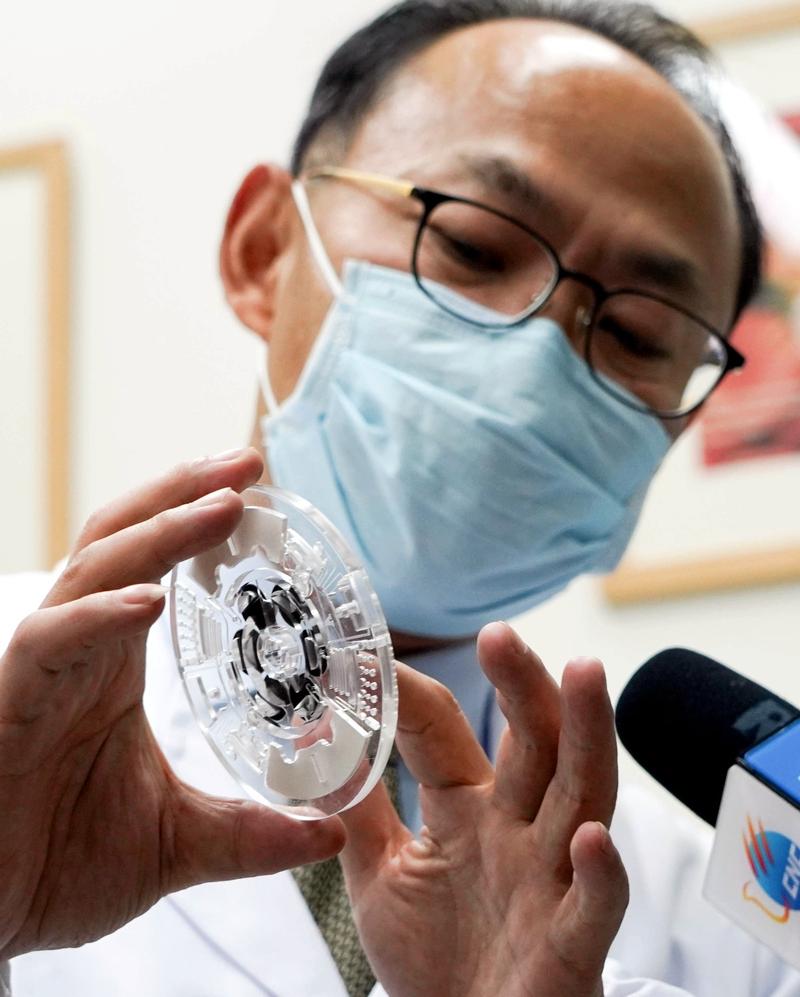 Cheng Jing, a scientist whose team developed China's first DNA "chip" to detect SARS 17 years ago, is contributing significantly to the battle against the COVID-19 outbreak.

In less than one week, he led a team to develop a kit that could simultaneously detect six respiratory viruses, including COVID-19, and meet the urgent demands for clinical diagnosis.

In less than one week, he led a team to develop a kit that could simultaneously detect six respiratory viruses, including COVID-19, and meet the urgent demands for clinical diagnosis

Born in 1963, Cheng, president of the State-owned bioscience company CapitalBio Corp, is a deputy to the National People's Congress and academician of the Chinese Academy of Engineering.

On Jan 31, Cheng got a call from Zhong Nanshan, a prominent respiratory disease expert, about the novel coronavirus pneumonia cases, according to a report by Science and Technology Daily.

Zhong told him about the difficulties in hospitals concerning nucleic acid testing.

The symptoms of COVID-19 and flu are similar, which has made accurate testing even more important.

Identifying the virus quickly in order to isolate patients for further treatment and reduce infection is crucial for controlling the outbreak.

In fact, Cheng had already established a team to research testing on the novel coronavirus before he received a call from Zhong.

At the very beginning, Cheng led the team from Tsinghua University and the company to stay at the lab day and night, making full use of every minute to develop the new DNA chip and testing device.

Cheng often had instant noodles for dinner during the time. He brought his luggage along with him every day to be ready to go to the "battle" in other cities.

"It took us two weeks to develop the DNA chips for SARS in 2003. This time, we spent less than a week," said Cheng.

"Without the wealth of experience that we accumulated in past years and the continuous support from the country for this sector, we could not have completed the mission so fast."

The chip that was used to test for the SARS virus required six hours to get results. Now, the company's new chip can test 19 respiratory viruses at one time within one and a half hours.

Even though the team has shortened the time for research and development of the chip and testing device, the approval process was not simplified and the accuracy was not decreased at all.

Cheng contacted four hospitals for clinical tests, while the industry standard is three.

"We are much more calm than the last time, facing the epidemic," Cheng said. "Compared with 2003, our research efficiency, product quality and manufacturing capacity have all improved a lot."

On Feb 22, the kit developed by the team was approved by the National Medical Products Administration and rapidly used on the front line.

On March 2, President Xi Jinping inspected Beijing for epidemic control and scientific prevention. Cheng gave a 20-minute report on the application of the new technology in epidemic prevention and the research achievements of the virus detection kits.

Founded in 2000, the CapitalBio Corp's core subsidiary CapitalBio Technology was located in the Beijing Economic-Technological Development Area, or Beijing E-Town.

Around 30 companies in the area have directly participated in the battle against the epidemic by developing and manufacturing facilities such as breathing machines, blood collection robots, blood purification machines, CT scan facilities and medicines.

During this year's two sessions, Cheng suggested that the country accelerate establishment of the intelligent network on major emerging infectious diseases, which can rapidly transfer information about the epidemic and patients to authorities.