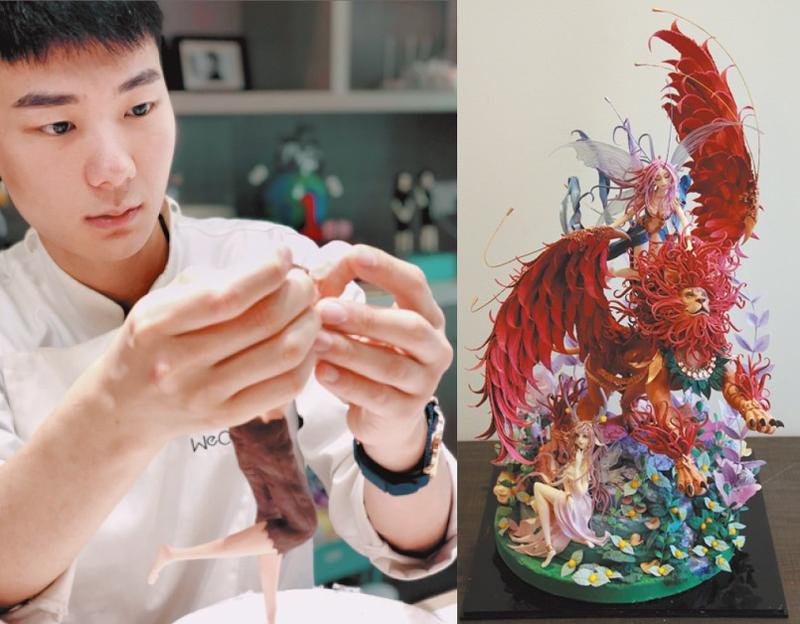 Zhou Fei makes an art piece with fondant at his studio in Hangzhou, Zhejiang province (left); The "magic forest" piece that won him a top prize at a cake show in Australia in 2018. (PHOTO PROVIDED TO CHINA DAILY)

A platter of sashimi, a dish of sweet and sour octopus and a plate of Japanese-style fried dumplings. They all look delicious, but none of them is what they seem.

Zhou Fei, 26, made these pieces of fondant art for the variety show Qiaoshou Shentan (meaning "the craft detectives"). The five "detectives" in the show found it difficult to tell them apart from the dozen or so genuine Japanese dishes placed in front of them.

Zhou frankly admits that he was a bit nervous when they examined the dishes closely, but he had the confidence.

"To reveal fondant impostors among a dozen real dishes is a fresh idea and exciting for the detectives, so they were so keen to find them," Zhou recalls.

In each episode of the show, the work of three craftsmen will be hidden among everyday objects or situations. The one whose work is least easiest for the detectives to identify wins the title of the best craftsman.

"They are all masters in their own field, and I communicated with, and learned from, them during the filming of the show," Zhou says.

"There are many similarities between fondant and dough modeling, and Zhang invited me to visit his studio later."

With seven years' experience in fondant art, in Zhou's eyes, fondant can be used to emulate everything except transparent materials.

Zhou has made imitation accessories, flowers and articles of daily use from fondant, and the reason he chose to make Japanese cuisine on the show is that "I've never made it before, so it's challenging".

Zhou says he also learned something from the detectives' ability to spot the fondant morsels from real dishes. He realized that he had made them look too fresh and appetizing because he didn't consider that real food would lose some freshness over the course of a long period of filming.

"I could have done better," he says.

In 2014, Zhou graduated from a vocational school in Hangzhou, Zhejiang province, majoring in Western desserts and buttercream cakes, to become a pastry chef.

He found that fondant cakes have more room for creative customization for clients, so he started to learn fondant modeling by himself. "A fondant cake with exquisite details can impress the clients as if silently telling a story," he says.

Moreover, Zhou wanted "to use this Western skill to present traditional Chinese culture" and he has actually made a name out of it.

After years of effort, and armed with his wild imagination, he has become well-known in the field for creating fondant figures from Chinese myth.

His signature work is the "magic forest", which won him a top prize at the International Cake Show Australia in 2018.

That piece took him three months to prepare and really shows his imagination. In the "magic forest" there were fairies and a winged lion. The lifelike fondant, with every detail made with care, impressed the judges.

He has also won four other prizes at international cake competitions. After each competition he would communicate with the judges to figure out what he could do better the next time.

"Each year I take part in one international and one domestic competition to continue challenging my skills," he says.

"I'm touched when I met other pastry chefs who have been making fondant cakes for more than two or three decades," he says. "Now I think, as I have chosen the path of fondant, I'll put my whole life into it."

Zhou is also focusing on studying and developing the flavor of fondant cakes to better suit the Chinese palate.

"In 2015, only a few people would order fondant cakes for birthday celebrations, but now it's becoming more popular. A dessert station with a fondant cake can be found in almost every wedding," Zhou says.

Zhou has witnessed fondant becoming more popular over the past five years, and he has also started teaching fondant classes to help more people develop an interest in the pastry art.

"The more people know about fondant, the more young talent will join the field. Fondant deserves to receive more attention and love, as its power of expressing feelings is unlimited."