Anthem bill: Over 300 arrested in renewed violence in HK 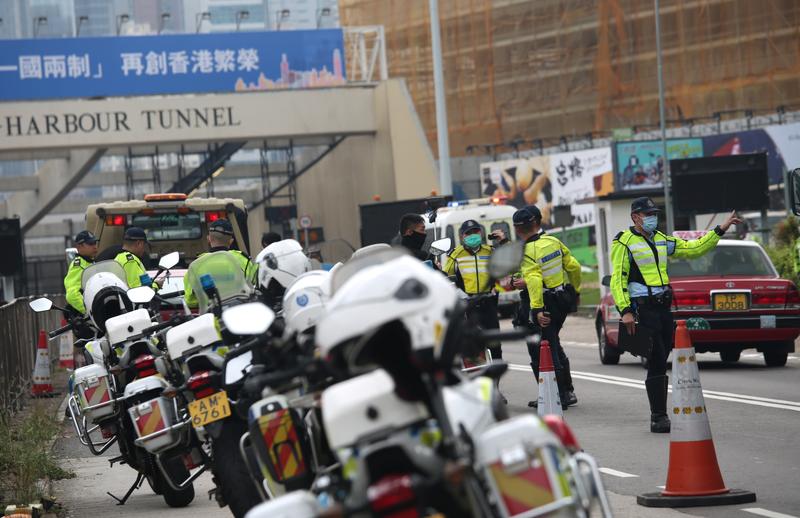 HONG KONG - Hong Kong police made more than 300 arrests and fired pepper pellets to disperse protesters in the heart of the Asian financial hub on Wednesday.

Hundreds of riot police were deployed around the city's Legislative Council (LegCo) and in and around Hong Kong's financial district as lawmakers debated the National Anthem Bill that would criminalize disrespect to China's national anthem.

The second reading of the national anthem bill was resumed in the legislature in the afternoon, after LegCo president Andrew Leung Kwan-yuen dismissed three anti-government lawmakers’ proposals to adjourn the meeting. He also ruled out any further adjournment proposals.

Officers arrested more than 300 people for participating in unauthorized assemblies in Central, Admiralty, Causeway Bay and Mong Kok areas, the police force said in a statement on Facebook.

The city saw a largely unfettered morning commute despite apprehension of large-scale disruptions by radical protesters.

At around 1 pm, protesters were found to occupy the carriageways in the vicinity of Pedder Street, Central, causing serious obstruction to traffic. Police officers repeatedly warned protesters to disperse and rounded up dozens.

IN PICTURES: Violent protests continue into the night in HK

Phalanxes of riot police kept watch on protesters there and outside Hysan Place, a busy shopping center in Causeway Bay.

Authorities erected a wall made of 6-feet tall, white and blue plastic barriers filled with water around LegCo, extending across a nearby park up to Victoria Harbour. A call to gather around LegCo was scrapped due to a heavy presence of riot police. Many shops, bank branches and office buildings closed early. 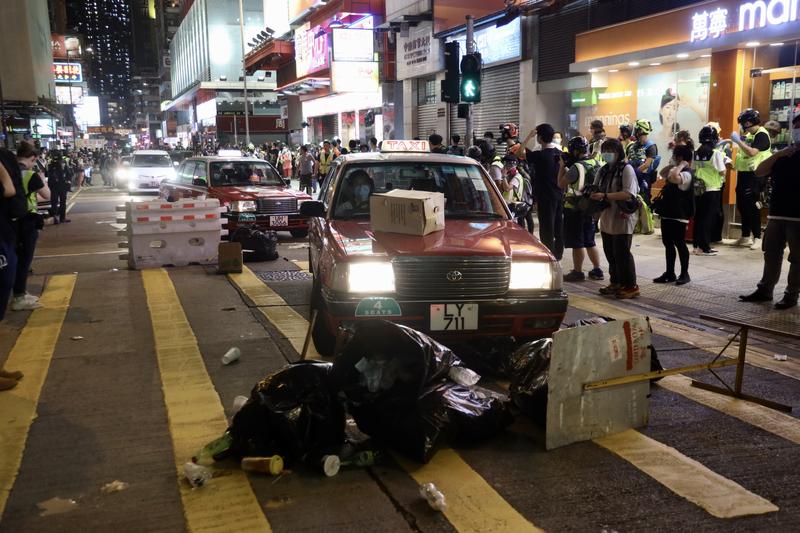 A taxi is blocked on Sai Yeung Choi Street South by a barricade set up by anti-government protesters during an illegal assembly in Mong Kok, Hong Kong, May 27, 2020. (CHINA DAILY)

Student groups and trade unions had called for protests and around 5.30 am Wednesday, radicals were found to have blocked roads with rubbish in an attempt to paralyse traffic in Tseung Kwan O and Hung Hom. In Hung Hom, nails were found on Wuhu Street, according to a government press release.

Police issued a warning to radicals to stop unlawful acts or face arrest. According to the Public Order Ordinance, participating in an unauthorised assembly carries a maximum penalty of five years’ imprisonment.

In a press release, the government urged members of the public to budget sufficient travelling time and pay attention to latest traffic arrangement.

Most disruptions happened early morning before the traffic rush began and were promptly dealt with. 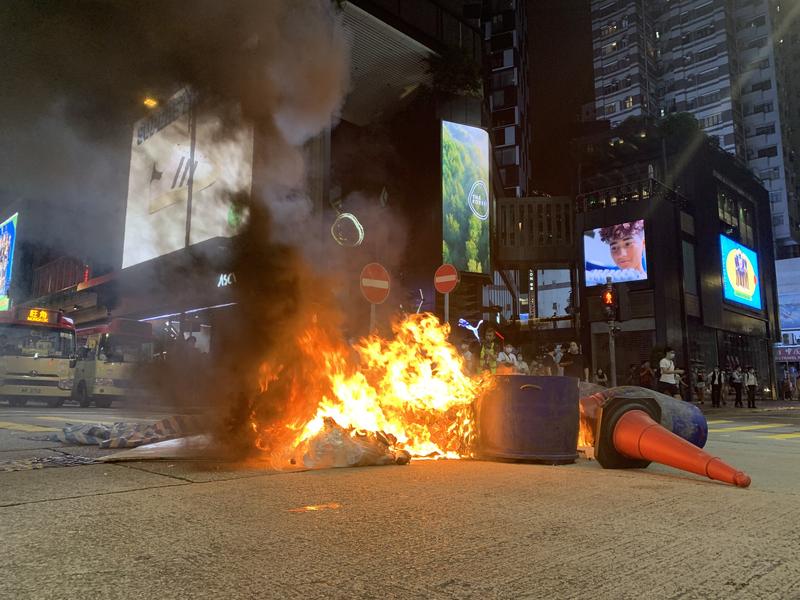 Police also said that at around 5:00 am, radicals threw barriers onto railway tracks at Kwai Hing MTR station, causing obstruction. Police said consequences could have been dire had a train been passing at that time.

In Kwai Hing, more than 10 black-clad rioters set fire to rubbish bins and trash on the streets around 7:00 am, police said.

Around 8:30 am, some drivers staged a drive-slow protest at the Hong Kong Island end of Cross-Harbor Tunnel, police said, but prompt intervention by officers kept traffic flowing. Police were particularly alert as middle school classes resumed Wednesday after a four-month suspension owing to the COVID-19 pandemic.

Several people were intercepted and found in possession of helmets, goggles and respirators and weapons such as petrol bombs.