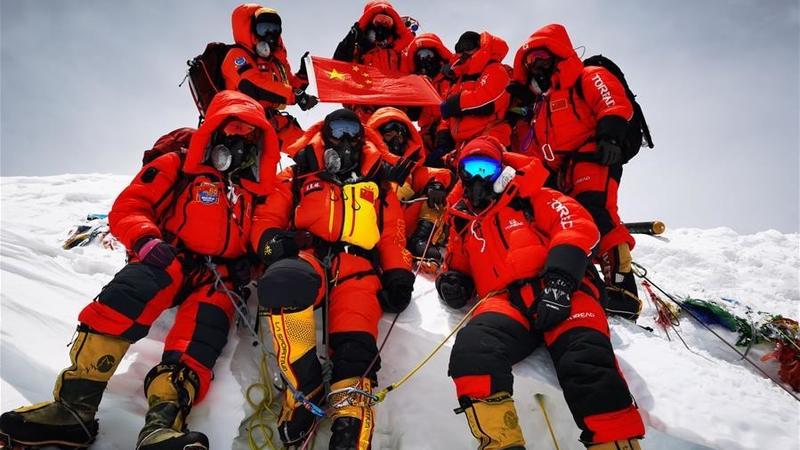 Chinese surveyors pose for a group photo atop Mount Qomolangma on May 27, 2020. (TASHI TSERING / XINHUA)

MOUNT QOMOLANGMA BASE CAMP - A Chinese survey team reached the summit of Mount Qomolangma Wednesday, and remeasured the height of the world's highest peak.

The event marked a crucial step in China's mission to survey the mountain, which scientists believe will enhance human knowledge of nature and help boost scientific development.

After summiting at 11 a.m., the eight-member team erected a survey marker and installed a GNSS antenna on the snow-covered peak, which measures less than 20 square meters, while other surveyors conducted observations from six points beneath the peak.

"The changes of Mount Qomolangma are of key significance to the global studies of geology and ecology, and have a major impact on people's lives," said Chen Gang, an engineer with the Ministry of Natural Resources.

The changes of Mount Qomolangma are of key significance to the global studies of geology and ecology, and have a major impact on people's lives

More than 300 years ago during the Qing Dynasty  (1644-1912), Chinese conducted the first survey of Mount Qomolangma.

Since the founding of the People's Republic of China in 1949, Chinese surveyors had previously conducted six rounds of scaled measurement and scientific research on Mount Qomolangma. They issued two height measurements for the peak, one in 1975 and another in 2005, putting it at 8,848.13 meters and 8,844.43 meters, respectively.

On May 6 this year, the Chinese survey team set out for the peak to determine its height, but plans to reach the summit were delayed twice by bad weather.

Mount Qomolangma is located in the collision and compression zone between the edges of the Indian plate and the Eurasian plate, where crustal movement is very active.

"Accurately measuring the height of Mount Qomolangma is helpful to the study of the elevation changes of the Himalayas and Qinghai-Tibet Plateau," said Gao Dengyi, an atmospheric physicist with the Chinese Academy of Sciences.

The team members remained at the summit for two and a half hours, a new record for Chinese climbers.

Members of a Chinese surveying team head for the summit of Mt. Qomolangma on May 27, 2020. (PENPA / XINHUA)

While at the summit, the team members also measured the depth of the snow and conducted GNSS, gravity and meteorological surveys.

The GNSS survey was assisted by China's home-grown BeiDou Navigation Satellite System (BDS). The high-altitude gravity survey set a new world record, being the highest of its kind.

The results of the measurement will be released after surveyors analyze, compare and check all the data they have acquired.

Before descending, the team members unfurled a Chinese national flag on the summit.

At about 1:30 p.m., team leader Tsenor reported to command at the base camp, "Command, we have completed the surveying mission and are ready to descend." 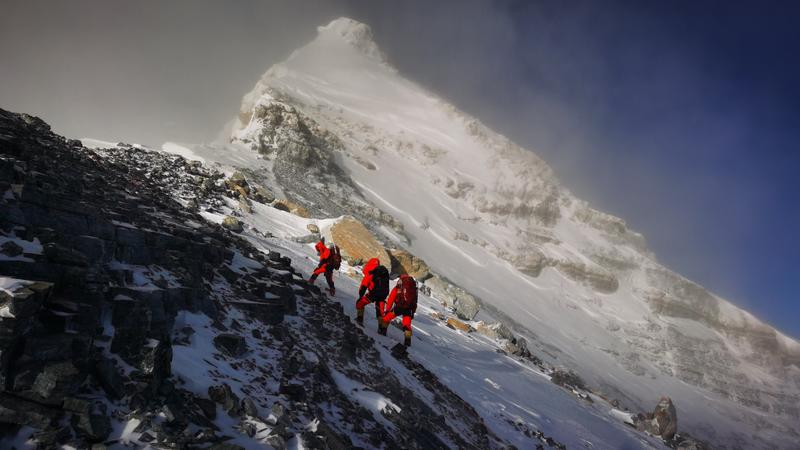 Members of a Chinese surveying team head for the summit of Mt Qomolangma on May 27, 2020. (PHOTO / XINHUA) 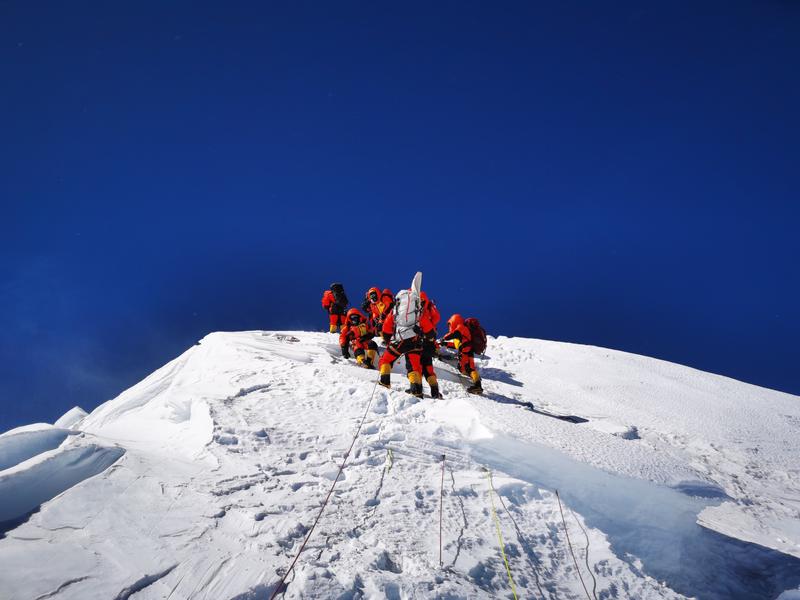 A Chinese surveying team reaches the summit of  Mt Qomolangma on 27 May, 2020. (PHOTO / XINHUA) 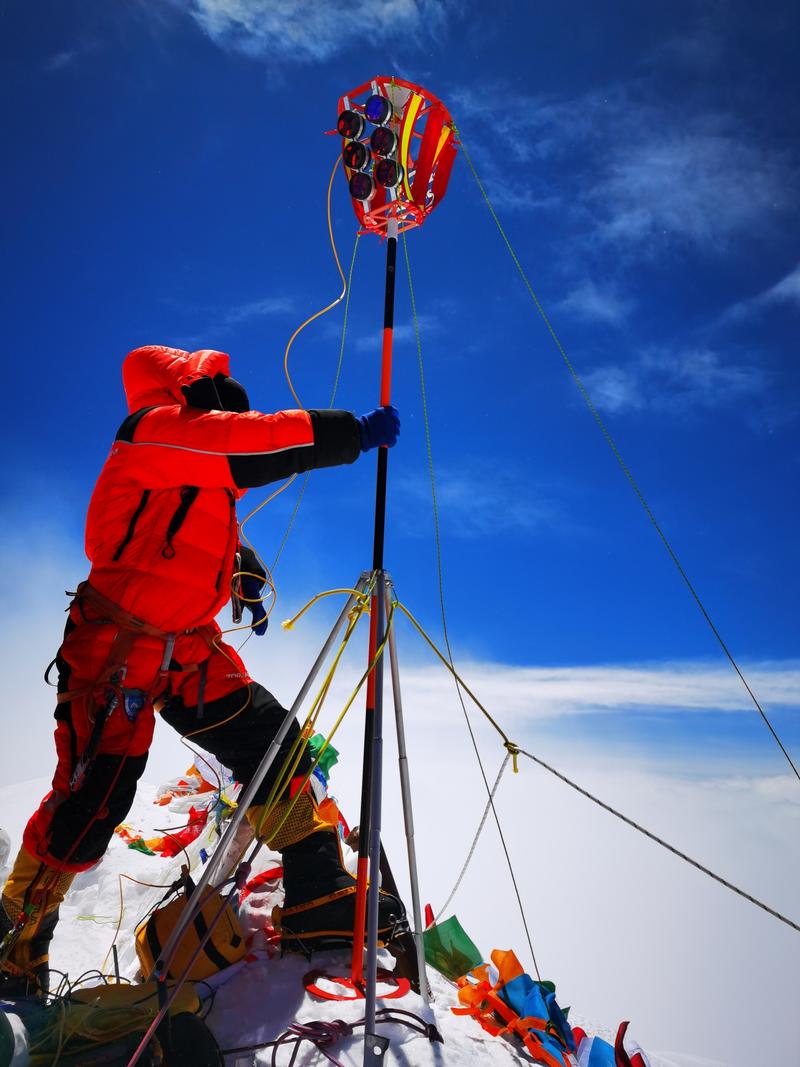 A Chinese surveyor conducts surveying atop Mount Qomolangma on May 27, 2020. (TASHI TSERING / XINHUA) 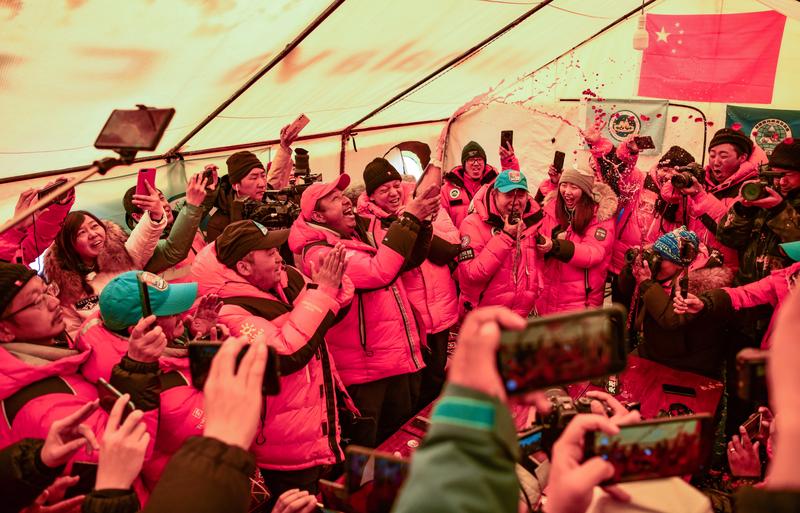 Staff members celebrate the summiting of Mt Qomolangma by a Chinese surveying team at the base camp on May 27, 2020. (PHOTO / XINHUA)