'No Eid in our home': Pakistani families mourn crash victims 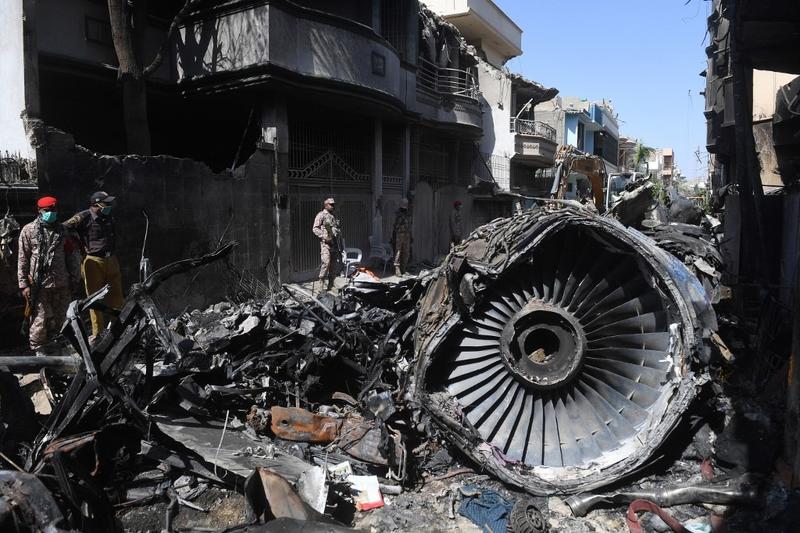 Security personnel stand beside the wreckage of a plane at the site after a Pakistan International Airlines aircraft crashed in a residential area days before, in Karachi on May 24, 2020. (ASIF HASSAN / AFP)

KARACHI/ISLAMABAD - As Fazal Rahmaan, 80 and his wife, Wahida Rahmaan, 74, boarded a plane in the Pakistani city of Lahore on Friday, their family’s biggest fear was that they might get catch the coronavirus on their way to spend the holiday in Karachi.

There were two survivors from onboard the aircraft, while no fatalities were reported on the ground

Instead the couple, who had been married for 54 years, were among the 97 people killed when an Airbus A320, operated by Pakistan International Airlines, crashed into a Karachi neighbourhood - Pakistan’s worst air disaster since 2012.

“We held many calls deliberating with doctors and family ... Our biggest concern was that they made the trip safely,” said their son, Inam Ur Rahmaan, who instead of welcoming his parents for the Eid al-Fitr holiday found himself picking through the wreckage of flight PK8303 praying for a miracle.

“I got in my car and followed the smoke and the ambulances,” said Rahmaan.

“When I saw the area, I realised that it would be a miracle if they had made it.”

There were two survivors from onboard the aircraft, while no fatalities were reported on the ground in the densely packed neighbourhood of multi-story homes abutting the eastern edge of Jinnah International Airport where the plane came down.

More than two dozen homes were damaged as the airliner roared in, leaving a tangle of severed electric cables and exposed rebar - a broken wing rested against the side of a home, an engine on the ground nearby.

The jet fuel set the wreckage ablaze, along with homes and vehicles, sending black smoke into the sky, a Reuters witness said.

Crowds rushed to the site, relatives searching for loved ones, rescue workers and the curious. Scores of ambulances and fire-engines jammed the narrow, debris-cluttered streets.

One rescue worker told Reuters two bodies were found with oxygen masks on. Many bodies pulled from the wreckage were charred beyond recognition.

The airline’s chief executive said on Friday the last message from the pilot indicated a technical problem. A team from Airbus is due to arrive on Monday to investigate, a PIA spokesman said.

“They’ll provide all possible assistance including decoding the black box,” the spokesman Khan, referring to the flight data recorder. 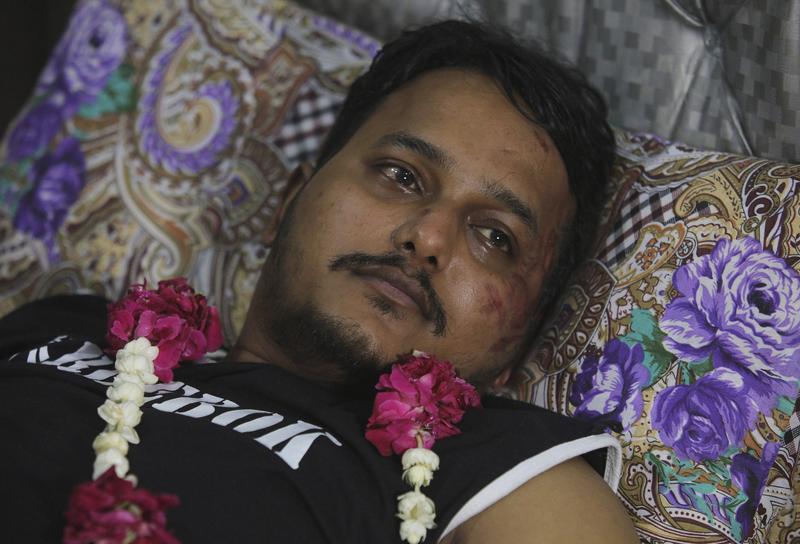 Mohammad Zubair, a passenger who survived a plane crash, is visited by relatives at his home in Karachi, Pakistan, May 23, 2020. (FAREED KHAN / AP)

Shahid Ahmed, 45, was at the airport waiting for his mother to arrive. When he reached the crash site he saw rescuers retrieving bodies and people taking selfies.

“There was no one responsible at the site, people were busy posing for pictures,” said a distraught Ahmed, who lost his mother, Dishad Begum, 75, who was also flying to Karachi for Eid.

After scouring the site and failing to find his mother, Ahmed went to look for her in hospitals.

“There was no list of the dead or injured at any of the hospitals, it was all chaos and mismanagement,” said Ahmed, who sobbed as he recounted the ordeal.

“Searching for our mother’s body was a nightmare.”

One of the survivors, engineer Muhammad Zubair, told Geo News the pilot came down to land, briefly touched down, then pulled up again.

He announced he was going to make to make a second try shortly before the plane crashed, Zubair said from hospital.

“I could hear screams from all directions. Kids and adults. All I could see was fire. I couldn’t see any people – just hear their screams,” he said.

Rahmaan said his family was still in shock.

Rahmaan said he took some comfort from knowing his parents always wanted to be with each other.

“Whatever’s happened, whatever the reason behind it, they always wanted to be together. At the end, they were together.”